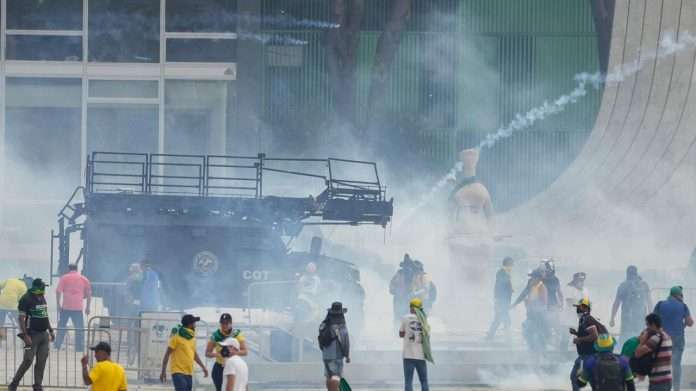 by Ana Ionova and Jack Nicas

At least 1,200 protesters were detained for questioning in the wake of the storming of Brazil’s capital buildings, a spokesman for the civil police said on Monday, as the authorities began dismantling the tent city where supporters of Jair Bolsonaro, the far-right former president, had been camping out since he lost October’s election.

The detentions came a day after one of the worst attacks on the country’s democracy in the 38 years since the end of the military dictatorship. Thousands of Bolsonaro supporters broke into government buildings in the capital, Brasília, on Sunday to protest what they falsely claim was a stolen election. In the weeks after the vote, Brazil’s military and independent experts said they found no credible evidence of fraud.

Brazil’s justice minister, Flávio Dino, had said late Sunday that at least 200 people had been arrested in connection with the riots, though another official put that figure at more than 400.

The protesters had been camped outside the army barracks in Brasília, according to Darbas Coutinho, a spokesman for the civil police. They would be questioned by law enforcement officials, and some could be charged with committing crimes against democratic institutions or attempting to unseat a democratically elected government, he said.

The pro-Bolsonaro protesters have been camped out in Brasília and other major cities across Brazil for over 60 days. Overnight, the country’s Supreme Court ordered the authorities to dismantle the camps within 24 hours.

President Luiz Inácio Lula da Silva, the leftist who won the election in October, signed an emergency decree late on Sunday, putting federal authorities in charge of security in Brazil’s capital. The order prompted concerns that the dismantling of the camp could fuel further tensions, but on Monday, the dispersal of the protesters had so far been peaceful.

In scenes reminiscent of the Jan. 6, 2021, storming of the U.S. Capitol, Mr. Bolsonaro’s supporters on Sunday laid siege to Brazil’s Congress, Supreme Court and presidential offices — the violent culmination of years of conspiracy theories advanced the former president and his allies. They set fires, repurposed barricades as weapons, knocked police officers from horseback and filmed their violent acts as they committed them. By Sunday night, the seat of government had been cleared.

President Biden, who was visiting the southern U.S. border on Sunday, called the protests “outrageous,” and Jake Sullivan, his national security adviser, said that the United States “condemns any effort to undermine democracy in Brazil.”

Here are some other key developments:

These are the Brazilian artworks vandalized at the presidential palace by Bolsonaro supporters.

The Bolsonaro supporters who stormed the Planalto Palace, the office of the president, on Sunday vandalized several works from revered Brazilian artists, including the painter Emiliano Di Cavalcanti, the palace said on Monday after a preliminary assessment of the damage to its collection.

The Planalto Palace had one of the most important art collections in the country, particularly for Brazilian Modernism, said Rogério Carvalho, the director of curatorship of the presidential palaces. “The value of what was destroyed is incalculable because of the history it represents,” he said in a statement.

One of the most significant pieces damaged during the riots was a mural by Di Cavalcanti, titled “As Mulatas.” Its estimated worth was 8 million reais, or over $1.5 million, the palace said.

Di Cavalcanti is considered one of the fathers of Brazil’s Modernist movement and is known for work that focused on marginalized classes of society. Photos shared on social media after the attack showed punctures across the canvas of “As Mulatas.” Seven tears were found, the palace said.

Bolsonaro supporters also caused significant damage to a 17th-century grandfather clock by Balthazar Martinot, a famed clockmaker for Louis XIV of France. The clock was a gift from France to King Dom João VI, the ruler of Portugal and Brazil, and is one of only two such Martinot pieces, the palace said. The second is part of a collection at the Palace of Versailles.

Restoration of the Martinot clock will be “very difficult,” Mr. Carvalho said.

The palace also said that:

Margareth Menezes, a singer who was tapped to lead Brazil’s Ministry of Culture after it was reinstated by Mr. Lula, said on Monday that she had been in touch with representatives from UNESCO and the country’s National Historic and Artistic Heritage Institute about restoring the damaged works.

On TikTok and YouTube, videos claiming voter fraud in Brazil’s recent elections have been recirculating for days.

On the WhatsApp and Telegram messaging services, an image of a poster announcing the date, time and location of the protests against the government was copied and shared over the weekend.

And on Facebook and Twitter, hashtags designed to evade detection by the authorities were used by organizers as they descended onto government buildings in the capital, Brasília, on Sunday.

One day after the thousands of people broke into government buildings to protest what they falsely claim was a stolen election, misinformation researchers are studying how the internet was used to stoke anger and to organize far-right groups ahead of the riots. Many are drawing a comparison to the Jan. 6 protests two years ago in the United States, where thousands broke into the Capitol building in Washington. In both cases, they say, a playbook was used in which online groups, chats and social media sites played a central role.

“Digital platforms were fundamental not only in the extreme right-wing domestic terrorism on Sunday, but also in the entire long process of online radicalization over the last 10 years in Brazil,” said Michele Prado, an independent researcher who studies digital movements and the Brazilian far right.

She said that calls for violence have been “increasing exponentially from the last week of December.”

She and other misinformation researchers have singled out Twitter and Telegram as playing a central role in organizing protests. In posts on Brazilian Telegram channels viewed by The New York Times, there were open calls for violence against the left-wing Brazilian politicians and their families. There were also addresses of government offices for protesters to attack.

In one image, which The Times found on more than a dozen Telegram channels, there was a call for “patriots” to gather in Brasília on Sunday to “mark a new day” of independence. Underneath many of the posters were details of gathering times for protesters.

The hashtag “Festa da Selma” was also widely spread on Twitter, including by far-right extremists who had previously been banned from the platform, Ms. Prado said.

In the months since Elon Musk took over Twitter, far-right figures from around the world have had their accounts reinstated as a general amnesty unless they violated rules again.

Ms. Prado said that misinformation researchers in Brazil have been reporting the accounts to Twitter in hopes that the company takes action.

Meta, the parent company of Facebook, Instagram and WhatsApp, said that the attacks Sunday were a “violating event” and that the company was removing content on its platforms that supported or praised the attacks on government buildings in Brazil.

The protesters in Brazil and those in the United States were inspired by the same extremist ideas and conspiracy theories and were both radicalized online, Ms. Prado said. In both cases, she added, social media played a crucial role in organizing violent attacks.

by Ana Ionova and André Spigariol

Questions linger about security lapses that helped the protesters.

For 10 weeks the protest encampment in the Brazilian capital grew, many in the crowd openly calling for the overthrow of the government.

On Monday, a day after marauders surged into presidential, legislative and judicial offices in Brasília, the protesters were dispersed, but a big question lingered: How did security officials ever allow things to get so out of hand?

Flávio Dino, Brazil’s justice minister, told reporters that with a major protest just two days away, security agencies began meeting on Friday to plan for possible violence. But the security strategy hatched at the meetings, including keeping protesters away from the main government buildings, was at least partly abandoned on Sunday.

“The police contingent was not what had been agreed upon,” Mr. Dino said.

It was unclear why the security plans changed, but by Sunday afternoon, the protesters severely outnumbered the authorities, enabling the crowds to gain easy entry to what should have been some of the nation’s most guarded buildings.

Some in the federal government blamed the governor of Brasília, Ibaneis Rocha, and his deputies, suggesting that they had been negligent, or even complicit, by understaffing the security force.

Late Sunday, Alexandre de Moraes, a Supreme Court justice and the country’s elections chief, suspended Mr. Rocha from his job as governor for at least 90 days, saying that the invasions “could only occur with the consent, and even effective participation, of the security and intelligence authorities.”

“I will calmly wait for the decision on the responsibilities in the regrettable events that occurred in our Capital,” he said in a statement.

In some videos posted on social media, law enforcement appeared to be aiding the rioters, pointing the way or removing barricades.

On Monday, Mr. Dino faced tough questions himself as to why the federal government had not acted more decisively in the face of security threats. He argued that the blame lay squarely with the authorities in the Federal District.

“We cannot presume that a state government” will “fail to fulfill its duties,” he said.

Deputy Senate President Veneziano Vital do Rego told reporters on Monday that he had tried to contact Governor Rocha on Sunday morning after being warned about a potential invasion of government offices. Mr. Rocha didn’t answer that call, he said, the deputy president spoke to his chief of staff.

“I received the statement that we shouldn’t worry because the whole situation was fully under control,” Mr. do Rego said.

President Biden spoke with President Lula Monday afternoon, White House officials said, conveying “the unwavering support of the United States for Brazil’s democracy and for the free will of the Brazilian people as expressed in Brazil’s recent presidential election.” Officials said Mr. Biden condemned the violence in Brazil and invited Mr. Lula to the White House in early February.

In Rio de Janeiro, military police officers dismantled a camp of Bolsonaro supporters in front of an Army facility on Monday. The far-right protesters began packing their tents as they were ordered to move out of the camp.