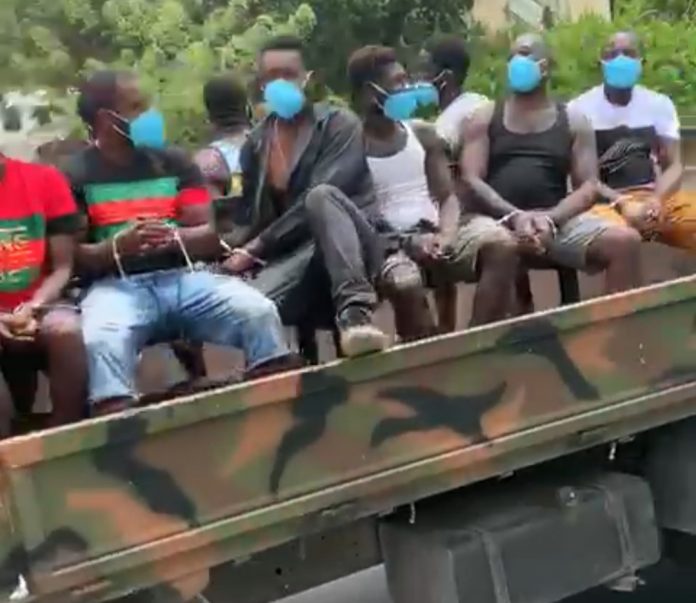 Thirteen Haitians have been captured and are in police and immigration custody after they illegally entered the Federation earlier this week. Commissioner of Police Hilroy Brandy is not ruling out charges against people who may have welcomed them.

They are all being tested for COVID-19. Haiti is currently a hotbed of virus cases.

On Monday police announced they had arrested 10 Haitians in the Keys Village area with another three on the run. On Tuesday the announced the captured of the three that were

Commissioner of Police Hilroy Brandy said to date 13 have been taken into custody and based on their investigations and interviews they learned they arrived on Sunday and were in different areas in keys.

He said charges may be laid on some local people in the area who may have facilitated shelter for the illegal immigrants.

“our officers investigated, there will be likely charges against people who were harboring these persons in their home and not reporting the matter to authorities.”

Brandy said they were still looking for two more people as investigations proved 15 entered into the shores at keys on Sunday. He said from investigations they came out of Dominica by boat and dropped off in keys.

“This is not the first time or the second time it has happened and we are working to see that there will not be a recurrence.”

He said plans are afoot to better protect the borders of St. Kitts and Nevis.

“The Ministry of National Security is seeking to purchase two boats from overseas shortly and presently we are also investing in drones so we can survey our coastline and be current to know who is traveling our borders. Soon you will see the improvement in our coastline.

Merclyn Hughes Chief Immigration Officer said on Monday the police would have executed a search warrant in the Keys community and found 10 Haitians in a house and mountainside of keys.

She said they were handed over to the Immigration Department as they entered the country illegally.

“So, they are illegal migrants, they are all males. We found 10 early parts of Monday and by the evening we had 12 and yesterday morning we found another one. We now have 13 adult male Haitians in Immigration/Police custody.”

Hughes said the police and immigration continue investigations and made an appeal to the general public if you see something, say something.

“We have been hearing rumors over the last few months that persons are coming in by sea. Our borders are porous; we hear that all the time. Sometimes getting in can be a little easier than for some countries that do not have the nice lush beaches that we do and so it is easy for illegal smuggling and trafficking to take place.”

She reminded the public that there is still COVID-19 within the region and that the Federation can be exposed to a second outbreak by illegal means if the practice continues.

“If persons are allowed to enter our borders illegally, we are leaving ourselves open to any possibility. I am appealing to the general public. We have people living around the coast throughout both islands so when you see something that looks illegal call and report it.”

The Chief Medical Officer said that on Monday the first 10 that were found were tested and the additional three would be tested for COVID19 will be tested Thursday. The results are not yet known,