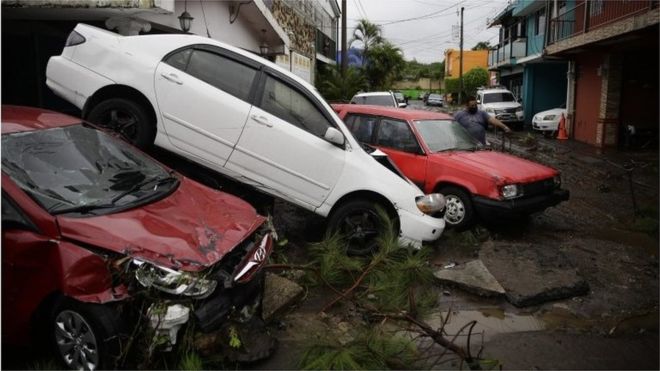 The president of El Salvador, Nayib Bukele, has declared a 15-day state of emergency to deal with the effects of the deadly storm.

Thousands of people have sought refuge in shelters after their homes were destroyed.

Amanda is the first named storm of the season in the Pacific. Meteorologists said it weakened after moving north to Guatemala but they warned it could again gain strength over the Gulf of Mexico.

Seven people died in the capital, San Salvador, according to the city’s mayor, Ernesto Muyshondt.

In San Juan Opico, in central El Salvador, three members of one family were killed when their home was swept away by a landslide.

Their neighbour described to news site El Salvador.com how after a night of heavy rain he heard “an almighty roar” at around 05:00 local time (11:00GMT) on Sunday.

Rocks, mud and water careered down the hillside flattening the home of the Renderos family. The bodies of the victims were found 2km (1.2 miles) downhill.

In San Salvador, more than 4,000 people moved into shelters.

Mayor Muyshondt described the situation as “unprecedented”. “We’re living through an emergency of great magnitude happening while we’re already dealing with another emergency of enormous proportions [the coronavirus pandemic],” he said.

El Salvador, which has a population of just under 6.5 million, has had more than 2,500 confirmed cases of coronavirus and 46 deaths, according to a tally kept by Johns Hopkins University in the United States.