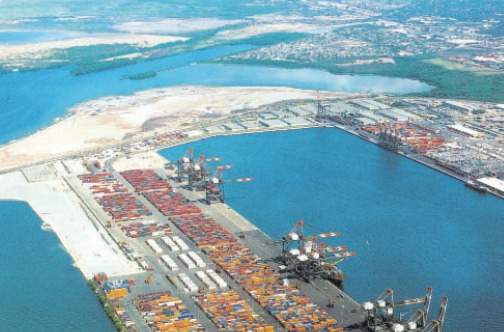 A view of the Port of Kingston

In a new annual report just released, according to the United Nations regional organisation, the value of regional exports and imports of goods is projected to drop -2.0 per cent and -3.0 per cent, respectively.

In a complex international context characterised by factors including the exacerbation of trade tensions, lower global demand, the growing substitution of imports with national production in some economies, the lower proportion of Chinese production that is bound for export, the retreat of global value chains, and the irruption of new technologies that impact on the very nature of trade.

In its report International Trade Outlook for Latin America and the Caribbean 2019′ ECLAC indicates that the region’s trade performance shows significant heterogeneity by subregion.
South America is experiencing a -6.7 per cent contraction in the value of its shipments, far steeper than the regional average.

This reflects the economic stagnation faced by the subregion with growth projected at just 0.2 per cent in 2019 which negatively affects intraregional trade and the heft that basic products have in its export basket, with prices for several of these having fallen.

It is estimated that only three South American countries (Argentina, Ecuador and Uruguay) will see the value of their shipments rise in 2019, driven by higher volume in their exports of basic products.

In contrast to South America in 2019, Central America, the Caribbean and Mexico will experience increases in the value of their exports (2.6 per cent, 3.7 per cent and 2.8 per cent, respectively). This is indicative of their lower dependence on basic products and their greater trade ties to the United States, whose demand for imports has shown more resilience than that of the region’s other main export markets.

Mexico in particular has benefitted from opportunities to substitute Chinese products in the United States market, and in 2019 it became that country’s most important trading partner.

“This is especially serious given that intraregional trade has a far bigger manufacturing component than that of exports to other markets, and also due to its great importance for SMEs that export,” the document explains.

“This panorama forces us to rethink strategies for the region’s international insertion and put more effort into promoting intraregional trade,” Alicia Bárcena said in her presentation.

In the report ECLAC also analyses the contribution of trade to environmental sustainability. According to the report, international trade and the production associated with it have both positive and negative effects on climate change. Furthermore, their respective regulatory frameworks are interdependent.

It adds that the carbon footprint of exports from the region’s countries that are intensive in natural resources is similar to that of other countries with comparable export profiles.

In addition, in the seven countries of the region where this information is available, the carbon footprint of exports (associated with the use of fossil fuels) declined between 2005 and 2015, the last year for which data was provided.

“Except in the Caribbean, few countries in the region have incorporated trade measures into their strategies to mitigate climate change.

“In the case of the nationally determined contributions (NDCs) of Latin American and Caribbean countries, the items related to trade are limited,” the report explains.

In its third chapter, the document examines the state of infrastructure and logistics, which are key aspects for international trade, production and regional integration.

It identifies a series of weaknesses in this area, such as a significant infrastructure gap, which is the result of the sustained low investment seen in recent decades; institutional and regulatory failings that affect competition, facilitation and trade; and the lack of comprehensiveness in policies, which deepens territorial inequalities and does not properly address negative externalities (environmental or social).

ECLAC has estimated that countries would have to invest 6 per cent of GDP a year between 2016 and 2030 to close the regional infrastructure gap.

This contrasts with the amount invested in a group of six countries (Argentina, Brazil, Chile, Colombia, Mexico and Peru), where average investment has been below 2 per cent of Gross Domestic Product (GDP) during this century. The gap is especially significant in the transportation sector, where investment levels would need to be tripled to accommodate expected growth in the population and the economy.

The report concludes that in order to further progressive structural change and achieve the sustainable development goals (SDGs), logistics and mobility related policies must be integrated with other public policies, such as those addressing productive development, financing, social development, and territorial and cross-border integration. This represents a highly complex effort, but a true opportunity for achieving the 2030 Agenda.