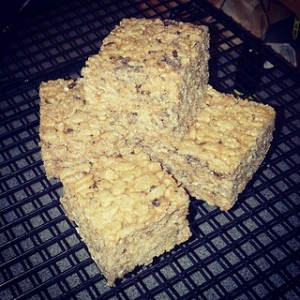 I recently came across a recipe for Cake Batter Rice Crispy Treats so had to try them. I mean seriously – cake batter and rice crispy treats – who could pass that up. I did try them and if I make them again, I would have to make a couple of adjustments. Although I did make one large one right away – I made these via my slow cooker. Hell yeah, that was probably the best part right there. I didn’t have to stand over a stove, waiting for marshmallows to melt, constantly stirring. Nope. I threw everything into the slow cooker and came back an hour later and stirred everything up. It was awesome and I doubt I’ll ever make rice crispy treats on the stove ever again.

The original recipe only calls for about 1/3 cup of cake mix, but that is so not enough. I knew that going in and actually made mine with 1/2 cup and that still wasn’t enough.  Well, it depends on the type of cake mix used I guess. For yellow cake, it made the rice crispy treats taste more like a sugar cookie than cake batter – not really what I was hoping for.  I made another batch with Devil’s Food cake and that was yummy. It gave the rice crispies a nice chocolate flavor without all the mess that comes with adding chocolate chips. I also used chocolate sprinkles for this one and that worked out nicely as well. However, I don’t think I would recommend using the Devil’s Food again – if you’re going to do it, go straight for the actual chocolate cake mix, or better yet trifle fudge cake mix. *grin* The other nice thing about using chocolate cake mix to make chocolate rice crispies is they don’t turn that brown. The picture below is of the chocolate variety as the yellow were given away before I remembered to take a picture.

Overall, these came out nice, but I think I actually prefer the originals more. It just wasn’t cakey enough for me. The one thing I will discourage is you can’t make these as a double batch. Not in the slow cooker at least. Unless you have a rather large one, there’s not enough room once you have all the melted marshmallows and cereal together – not for a double batch. If you want to try, go for it, but I couldn’t do it.

Note: If you spread these out on a cookie sheet, they’ll be thin as a single batch.  I did that, then once they cooled, folded them on each other. They came out as a nice thick block and made cutting them a little easier too. 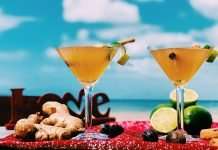