The organizers of the Grenada Triathlon celebrated with their 21st year of hosting this annual event, and for the very first time the Olympic distance was offered for the visiting athletes.

The team representing Nevis this race weekend were Miranda Fellows and Kristina Stoney in the Olympic distance, Sarah Petre-Mears in Sprint and her two children Alex and Siobhan who were to compete in the kids division of racing, a first for St Kitts and Nevis. Also on hand were Triathlon Federation President Winston Crooke, wearing the hat of racer and team supporter alongside Stanley Williams.

The race was based in the grounds of the ‘Lance Aux E’pines’ Cottages with great support from sponsors Digicel amongst others.

The events started with the smaller athletes, really small athletes, some of them as young as 4 were doing mini triathlons. It was wonderful to watch and join in the cheers of encouragement.

It was soon time for Siobhan and Alex to join the melee, competing in their respective age groups. It must have been daunting to race away from home for the first time, but both acquitted themselves well and did their very best against some much more experienced young athletes.

The Sprint and Olympic distances were started at the same time, so the older members of the team lined up with the 50 other athletes to swim one or two laps of the triangular swim course. Winston and Sarah finished their one lap in good order with Sarah just beating Winston out of the water, whilst Miranda and Kristina battled on for their second lap, no easy task as their competition included current OECS champion Clare Morrell on home turf, and two time Carino Health Spa triathlon winner Janine Herweijer, who was on a two week sailing vacation in the region. Out on the bike course Winston was having an awful time, but Sarah gamely took on the challenge of the undulating three-lap course, doing well enough to place top in her age group, and collect her very first triathlon trophy.

The women’s event was shaping up to be even more exciting than the men’s, Clare coming out of the swim first, followed 5 minutes later by Janine, then Miranda and Kristina, Janine’s strength is her bike and she set out after Clare, determination in every pedal stroke. Something was becoming very clear early on, Miranda was also on a mission, and so it proved to be, she as good as matched the bike speed of Janine and easily outpaced and passed Clare. Kristina coming out from the swim last was also motivated to catch up on the bike, normally her strongest component, however she also struggled to match Miranda’s pace but did manage to pull 10 minutes back on Clare. So the order coming out for run was Janine, Clare, Miranda then Kristina. The race was definitely on, Miranda however remained on fire and had passed Clare by the second of the four laps leaving only Janine in her sights, Kristina by this time was showing some true guts and determination to claw herself back into contention, pulling back almost a full lap on Clare to put her in third place.

The Miranda machine though was unstoppable as she completed the course in her fastest time so far 2:46:27 to take a well deserved first place, Kristina was still out there fighting, eventually passing Janine also to put her in second place, with Clare following close behind. The two top positions went to the women of Nevis and huge congratulations to them both.

The next events for the Nevis team are as follows: Reggie Douglas heads to Venezuela on Friday to race for the first time as an elite athlete, Miranda, Kristina, James and Reggie will race in Tobago on 24th May, and for the first time two female athletes from the club, Sarah Petre-Mears and Paula price will race Hawaii _ Ironman in June, so wish them all well as you see them during their training. 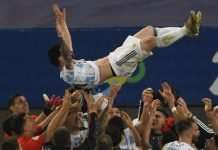