WASHINGTON, Nov 18 (Reuters) – U.S. President Joe Biden hosted Canadian and Mexican leaders on Thursday for the first North American summit in five years in a bid to revitalize cooperation that has been over-shadowed by tension over Biden’s “Buy American” agenda and immigration.

Biden met separately at the White House with Canadian Prime Minister Justin Trudeau and Mexican President Andres Manuel Lopez Obrador, and then all three met together.

The talks were aimed at finding common ground among the three neighbors bound together by the United States-Mexico-Canada (USMCA) free trade agreement, which governs some $1.5 trillion a year in North American trade.

But disputes over the auto industry, Biden’s “Buy American” policies and a Mexican electricity bill weighed on the summit. The United States and Canada appeared at an impasse over a U.S. proposal for tax credits on U.S.-made electric vehicles, which Ottawa says violates trade agreements. read more

While no major breakthroughs were announced, Biden had hoped to make headway on the thorniest challenges with America’s two neighbors, including easing immigration pressures, reducing trade friction, recovering from the global pandemic and competing better with an increasingly assertive China.

“Our North American vision for the future draws on our shared strengths,” Biden said, sitting at a long table that allowed the leaders to maintain distance in keeping with COVID-19 protocols.

“We have to end the pandemic and take decisive action to curb the climate crisis. We have to drive an inclusive economic recovery,” Biden said. “We have to manage the challenge of unprecedented migration in our hemisphere.”

Following the summit, the White House announced agreements to develop a North American strategy to reduce methane and a pledge for all three countries to donate COVID-19 vaccines to Latin America and the Caribbean.

The summit is a result of a push by Biden to revive the so-called Three Amigos, a working group ditched by his predecessor, Donald Trump. read more The leaders will reconvene in Mexico next year, the White House said.

Resetting ties with Mexico and Canada is part of Biden’s effort to turn the page on the Trump era, shifting away from his predecessor’s strident go-it-alone approach.

Trump had especially fraught dealings with Trudeau, imposing tariffs on some Canadian goods and sometimes hurling insults at the Canadian premier. The leftist Lopez Obrador forged a working relationship with Trump despite the Republican president’s economic threats and insulting references to Mexican migrants.

Mexican Foreign Minister Marcelo Ebrard said Lopez Obrador explained during the talks why he was pursuing legislation that would give priority to Mexico’s state-owned power utility over private firms, but added it was not a central issue.

Nearly 10 months after taking office, Biden could use a diplomatic win. He faces sagging approval ratings and is trying to tamp down inflation and supply chain issues while grappling with record numbers of migrants at the U.S.-Mexico border.

Biden is under domestic pressure to contain that immigration, which Republican opponents have derided as an “open border” policy, and he needs Mexico’s cooperation. 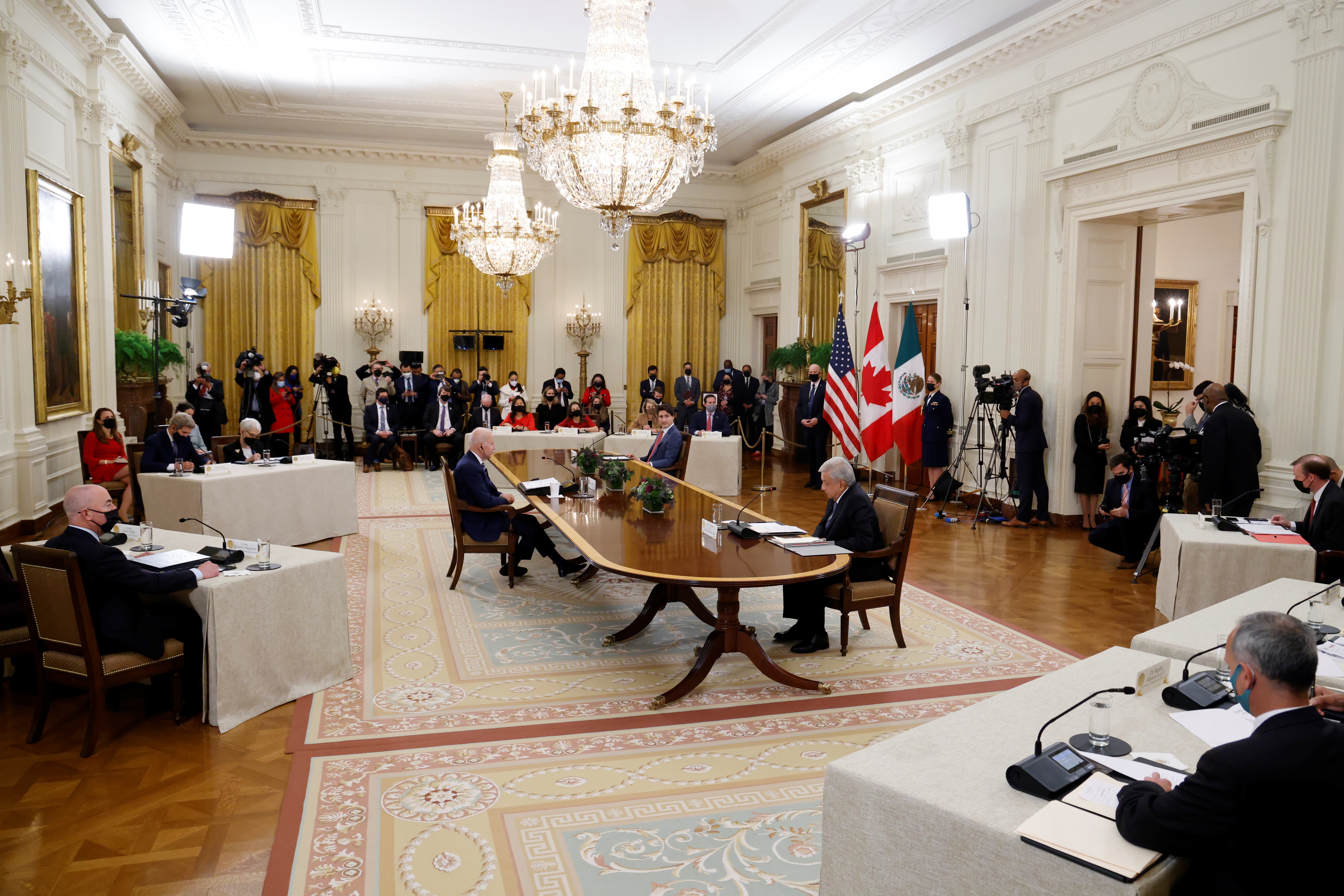 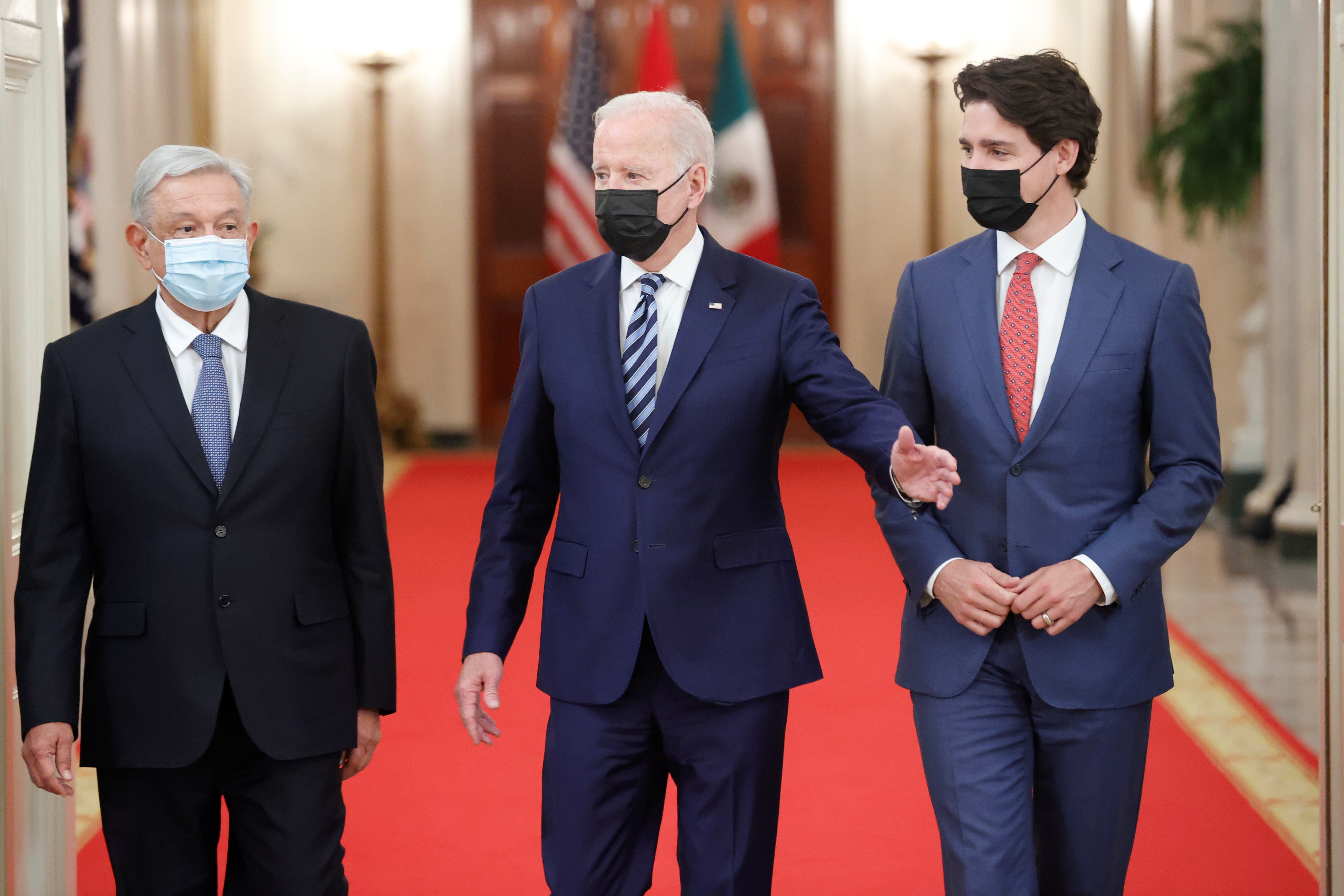 In brief remarks to reporters during bilateral talks, Biden – holding his first in-person meeting with Lopez Obrador since taking office – said migration was among the main issues they were tackling but did not elaborate.

Sitting alongside Biden, Lopez Obrador thanked him for proposals that could improve the lot of many immigrants to the United States. The fate of any Biden immigration initiative remained uncertain in the U.S. Congress.

Ebrard said the United States had agreed to invest in Central America and southern Mexico to help curb migration.

The leaders also committed to banning imports of goods made with forced labor, a policy Biden’s administration has aimed at China. Activists and Western politicians accuse China of using forced labor in its western Xinjiang region, an allegation Beijing denies.

Sounding an alarm about China, Lopez Obrador said during the three-way meeting that greater North American economic integration, including “stopping the rejection of migrants” needed for the U.S. and Canadian labor forces, would be the best way to face “the productive and commercial expansion of China.”

The Mexican president warned North America could be headed for an “unacceptable imbalance” of economic power with China that “would keep alive the temptation of trying to resolve this disparity by use of force.”

The Biden administration has taken a tough rhetorical line with Beijing on a range of issues, though a virtual summit between Biden and Chinese leader Xi Jinping this week sought to lower the temperature.

Canada has also had rocky relations with China.

Both Canada and Mexico are worried about Biden’s “Buy American” provisions and a proposed electric-vehicle tax credit that would favor unionized, U.S.-based manufacturers.

The credit is included in the sweeping $1.75 trillion “Build Back Better” legislation that was also being voted on by the U.S. House of Representatives on Thursday. read more

Canada says the tax credit would violate USMCA rules. The White House insisted on Thursday that it does not. read more

In remarks to reporters following the summit, Trudeau said the American side heard Canada’s concerns about the credit very clearly and Canada would continue to pursue the issue.