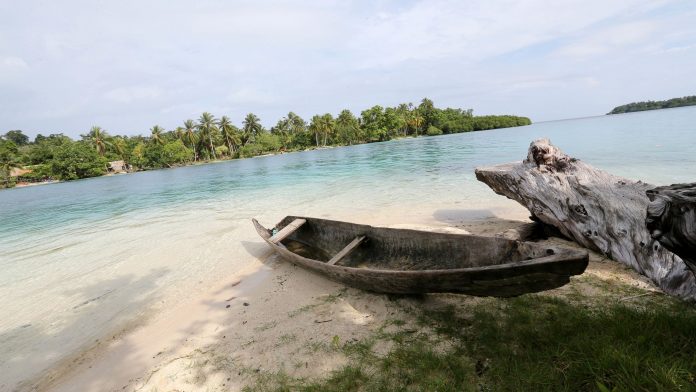 Tavanipupu Island in the Solomon Islands, where no coronavirus cases have been reported

There are still 32 countries and territories across the world which have not yet reported a single case of the novel coronavirus.

Many are small, hard-to-reach island nations in the Pacific such as Nauru, Kiribati and the Solomon Islands.

Others include Comoros, Lesotho, and Turkmenistan. Several of these nations are some of the least-populated places in the world.

There have been more than three million cases of coronavirus across the world, and 215 countries and territories recognized by the United Nations have seen at least one case of COVID-19.

Some 191 of these have experienced local transmission – when the virus spreads within the community.

There have been deaths in at least 166 of them.?

Just because a nation has not reported any infections, it does not necessarily mean there have been no cases.

North Korea has not reported any coronavirus cases, but it borders China, Russia and South Korea, which have all reported high levels of infection.

The secretive state relies heavily on propaganda and reveals little to the outside world.

Five countries and territories say they have managed to eradicate the virus.

These are Anguilla, Greenland, the Caribbean islands of St Barts and Saint Lucia, and Yemen.

Each says they do not have any currently active infections and have reported no deaths, despite previously recording cases.

Other countries say they have managed to dramatically reduce the number of new cases.

On Wednesday, China’s National Health Commission reported 22 new cases on the mainland, 21 of which came from abroad.

This is a sharp decline from the hundreds and even thousands of daily new cases being tallied until early March.

New Zealand, which has recorded 1,474 cases, has celebrated a victory over the virus and said it is well on its way to “elimination”.

On Monday, it reported just one new case of the virus and has begun relaxing its strict lockdown.

Other countries which have started to ease some lockdown restrictions include Spain, Germany, Hungary, Cyprus and Norway.

In Spain, which had imposed some of the strictest lockdown measures in Europe, children have been allowed one hour of daily outdoor exercise, while the rest of the country will be allowed to leave the home for short walks or exercise from 2 May.

Germany, which began easing restrictions on 20 April, is facing the prospect of having to restore stricter measures as its number and rate of infections grew again.

The country had allowed some retailers to reopen after seeing a decrease in cases.