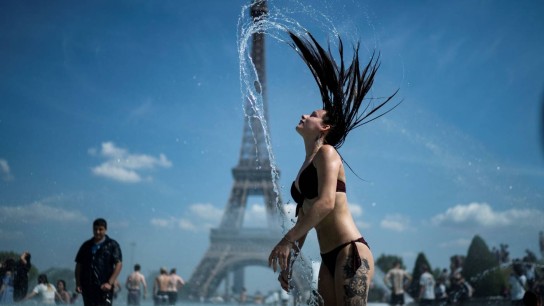 A record high of 45C is expected in France as a potentially lethal heatwave hits the continent.“The latest forecasts leave little room for doubt: we are heading for a new national record,” said a French forecaster, as peaks of 45C (113F) are forecast in southern towns on Friday.

If realised, this would breach France’s record of 44.1C, which was reached in two separate locations in southern France during a notorious 2003 heatwave. The French psyche is still scarred by that weather event, in which almost 15,000 people died.

The Mirror says an “inferno” is on its way, adding that “frantic officials” are ordering the elderly and young to remain indoors, while the BBC says warnings over weather have “already caused a rush on fans and the cancellation of exams for some teenagers in France”.

A meteorologist in Spain has been more dramatic, warning on Twitter that “hell is coming”.

National highest-ever temperature records, typically set later in the summer, are likely to be broken across Europe in the coming days as the early summer heatwave, which experts say has been caused by a plume of hot air from the Sahara, sweeps across the continent.

Meteorologists say record highs for June could be beaten in Austria, Belgium, the Czech Republic, Denmark, France, Germany, Luxembourg, the Netherlands and Switzerland. In several of those countries the overall record high could also be overtaken.

In France, the authorities have designated “cool places” for the vulnerable population, consisting of air-conditioned public places and parks. In Paris, charities have been handing water to homeless people on the streets.

French President Emmanuel Macron has called for extra vigilance in protecting the country’s most vulnerable population.

He said: “As you know, at times like these, sick people, pregnant women, infants and elderly people are the most vulnerable. So we must be vigilant with them and have prevention measures in place in order to intervene as quickly as possible.”

French health minister Agnes Buzyn added that there is “always a higher mortality rate” in vulnerable people, despite preparations.

Heatwaves early in the summer can be particularly lethal, as the public have not yet had time to acclimatise to the higher temperatures of the season. “Heatwaves are silent killers,” tweeted Stefan Rahmstorf, a climate scientist at Potsdam University.