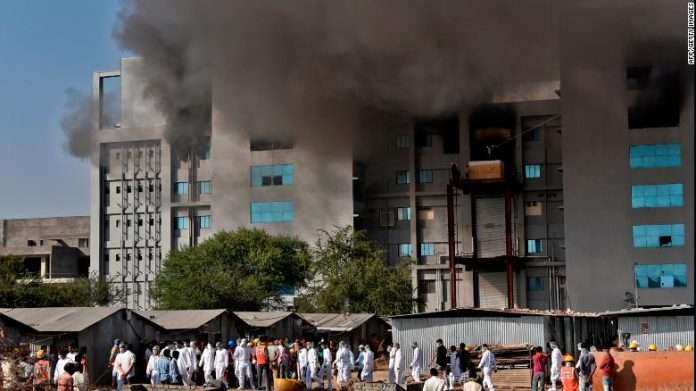 New Delhi, India (CNN) A fire that broke out at a facility of the world’s biggest vaccine maker that killed five people would not affect vaccine production, the head of the company said Thursday.

The blaze at the Serum Institute of India (SII) in the western city of Pune was brought under control on Thursday though the cause is still under investigation, according to Murlidhar Mohol, the city’s mayor.

Four people were rescued from the six-floor building but five others died, Mohol said. They are believed to have been construction workers as the building was still under construction at the time of the fire.

Videos and images showed black smoke billowing out of the building at the company’s complex. Fifteen units of the municipal corporation and fire department worked to douse the fire, Mohol said.

Preliminary investigations suggest that “during the building’s construction, some welding work could have led to the fire,” he added.

Pune’s fire brigade chief Prashant Ranpise said Friday that the fire started on the second floor. As firefighters worked to put out the flames, the blaze reigned in another spot. The second fire was extinguished at 4:15 p.m. local time by 50 firefighters and personnel. Ranpise said they are still investigating the cause of the fire.

“We have learnt that there has unfortunately been some loss of life at the incident. We are deeply saddened and offer our deepest condolences to the family members of the departed,” SII CEO Adar Poonawalla tweeted Thursday.

SII, the world’s biggest vaccine maker, is in partnership with Oxford University and AstraZeneca to produce the Covishield vaccine. In December, the company said it was producing 50 to 60 million doses of Covishield per month, with production to be scaled up to 100 million doses in January or February.

A family business started by Poonawalla’s father 50 years ago to bring cheaper vaccines to the masses, the Serum Institute of India is aiming to produce hundreds of millions of coronavirus vaccines for not only India, but also other developing countries.

In a tweet, Poonawalla said that despite a “few floors being destroyed,” production of the Covishield vaccine would not be affected.

“I would like to reassure all governments and the public that there would be no loss of COVISHIELD production due to multiple production buildings that I had kept in reserve to deal with such contingencies,” he said.

Cyrus S. Poonawalla, SII’s chairman and managing director, said in a statement that the fire broke out at a facility that was under constriction in the Special Economic Zone at Manjri. He said it was an “extremely sorrowful day” and the company would offer INR 2.5 million ($34,000) to each of the victims’ families.

Indian Prime Minister Narendra Modi tweeted his condolences Thursday: “Anguished by the loss of lives due to an unfortunate fire … In this sad hour, my thoughts are with the families of those who lost their lives. I pray that those injured recover at the earliest.”