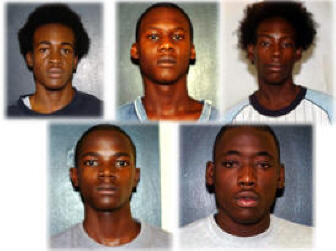 (Basseterre, St. Kitts) –  Police have charged another young man with the murder of Gregory Zakers.  On May 2, Moses Gardner, 22, of St. Pauls Village was arrested and charged with murder.

Gardner’s arrest brings to six the total number of arrests in the Zakers murder case.  On April 30, Jomi Rawlins,19, Clyde Norford, 25, two 18 year olds Nelson Challengers, 18, Shenroy Francis 18 and an unnamed juvenile, 17, were all arrested and charged with Mr. Zakers’ murder.  The six young men are from St. Paul’s Village.

Mr. Zakers was reported missing on April 11 after he left home on April 10 en route to St. Paul’s Village.

Less than two months before his disappearance, Gregory Zakers was found not guilty for the murder of Josh Smithen of St. Paul’s Village. On Feb. 18, the jury acquitted Zakers of murder but was indecisive on the guilt of his co-defendants, Fitzroy Challengers and Jamal Bradshaw. The two men are awaiting a new trial.

Zakers’ murder was the eighth murder in the Federation for the year.  So far police have made arrests in four of the eight murders to date.

On Monday, April 7, Lionel Warner, alias “Shaggy” of Dieppe Bay was arrested and charged for the murder of Alphonso Richards, 25, alias “Bobo Hortical” of St. Pauls Village. The murder was committed on Saturday, April 5. During an altercation, Mr. Warner allegedly stabbed Mr. Richards in the abdomen. Warner subsequently surrendered himself at the Basseterre Police Station .

Wycliffe “Wicked” Liburd was charged in the gun murder of Charles Matthew. Mr. Matthew was gunned down on Apr. 18 shortly after 11 a.m.

Bishu Issac surrendered to police on April 19 and on April 22 was charged in the murder of Tau Gowan, 26. At about 8 p.m. on April 18, 2008, police responded to a report of stabbing at the junction on Market and Central Streets, where they found Mr. Gowan dead at the scene.

Police have yet to make arrests in the murders of Leon ‘Gravo’ Westerman, Derrick ‘Jake’ Gumbs Jr., Leon Willock and Orlando ‘Snoop’ Williams.