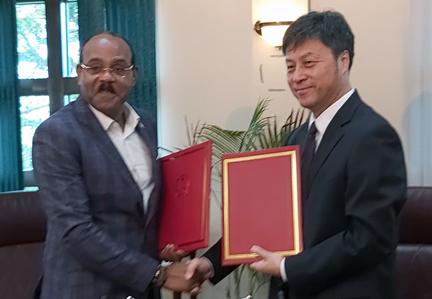 Prime Minister Gaston Browne took the opportunity at a housing grant signing ceremony between the Government of Antigua and Barbuda (GOAB) and the People’s Republic of China to inform China’s Ambassador Sun Ang that he will be making a formal request for US $20 million to expand the University of West Indies Five Island Campus.

The signing ceremony was for a housing grant, geared primarily toward the Government’s Affordable Housing project worth approximately US $11 million, and a US $250,000 education grant toward a multimedia center at UWI Five Islands.

Speaking directly to Ambassador Sun, Browne said, “I know that you’ve programmed this $11 million for housing, but I believe we need about $20 million to expand the university.

“I don’t want to place any additional burdens on the People’s Republic of China,” Browne continued, “but I’ll be inviting you to dinner very shortly at my home and we have to have a discussion about how we can get some resources to advance the expansion of the University.”

The Prime Minister listed a number of expansion projects to the Five Islands campus to include: an additional room stock of 100 dormitories for students; additional administration facilities as well as an improved programme offering in the coming years.