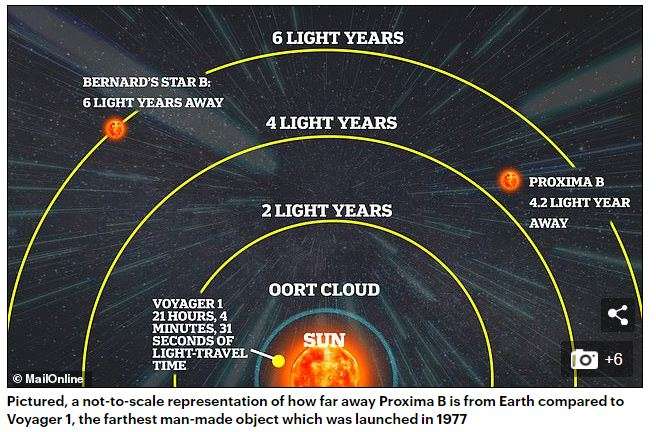 A mysterious radio signal from our nearest stellar neighbor, Proxima Centauri, is being ‘carefully investigated’ by a team of alien hunting astronomers.

Researchers from the Breakthrough Listen Project – a £70m initiative to find alien life through radio telescopes – have been studying the radio waves since April 2019. Proxima Centauri is 4.2 light years from Earth and has two confirmed planets, a Jupiter-like gas giant and a rocky world called Proxima b in the habitable zone.

The signal was spotted by the Parkes radio telescope in Australia in April or May 2020, according to a report in the Guardian, and, unlike previous radio bursts hasn’t been attributed to any Earth-based or near-Earth human created source.

It is likely that this signal has a natural explanation, but that hasn’t stopped alien hunting astronomers from listening more closely than they normally would.

The team say this is one of the most exciting radio signals since the ‘WOW!’ signal in 1977 that led many to speculate it originated from a distant alien civilization.

Pete Worden, director of Breakthrough Initiatives, said the signals are likely interference from Earth-based sources we can’t yet explain. However, he told the Guardian that it was important to wait and see what the project scientists conclude from their close examination of the signal.

The beam being investigated hasn’t been spotted since the first observation in April or May 2019, causing astronomers to speculate it is similar to the ‘Wow! signal’.

This was a short-lived radio signal detected from a distant star system by the Big Ear Radio Observatory in the US in 1977 and labelled with the word ‘WOW!’.

Until now that has been the best possible candidate astronomers have had to work with for signs of extraterrestrial intelligence – although like this new signal, very little is known about it or what unleashed the signal in the first place.

The team from Breakthrough Listen are currently preparing a research paper on the findings, although no date for publication has been set.

The initiative was launched by Silicon Valley tech investor Yuri Milner in 2015 to look for stray or intentional alien signals and designed to last a decade.

Breakthrough Listen involves listening out for ‘techno signatures’ within the range of signals coming from the universe and signatures from human-made objects.

Speaking to the Guardian, Lewis Dartnell, an astrobiologist from the University of Westminster, said it was incredibly unlikely this signal is from an alien civilization.

‘We’ve been looking for alien life for so long now and the idea that it could turn out to be on our front doorstep, in the very next star system, is piling improbabilities upon improbabilities,’ he told the Guardian.

The professor of science communication said if there is intelligent life as close as Proxima Centauri then it is likely the galaxy is teeming with life.

‘The chances of the only two civilizations in the entire galaxy happening to be neighbors, among 400bn stars, absolutely stretches the bounds of rationality.’

The star is also likely to be constantly bathed in stellar radiation, making it unlikely liquid water and life ‘as we know’ could have formed on its sole rocky world.

Based on a radio signal thought to be from a large expulsion from the star, they believe it regularly belches out large amounts of ionizing radiation. These solar flares and radio bursts would kill all life on a planet too close – and Proxima b is within this danger zone and showered with sterilizing particles.

It is also likely tidally locked – just like the Moon is with the Earth – due to its close proximity to the star, meaning one side is always day, the other night.

‘It’s hard to imagine how you can have a stable climatic system and all the things you need to get from bacteria, which are hardy, up to intelligent animal life forms, which certainly are not,’ Dartnell told the Guardian.

‘But I’d love to be proved wrong,’ he added.

It is possible there are other planets, slightly further from the star, that have yet to be discovered by astronomers, but they are likely too far away for liquid water to form.