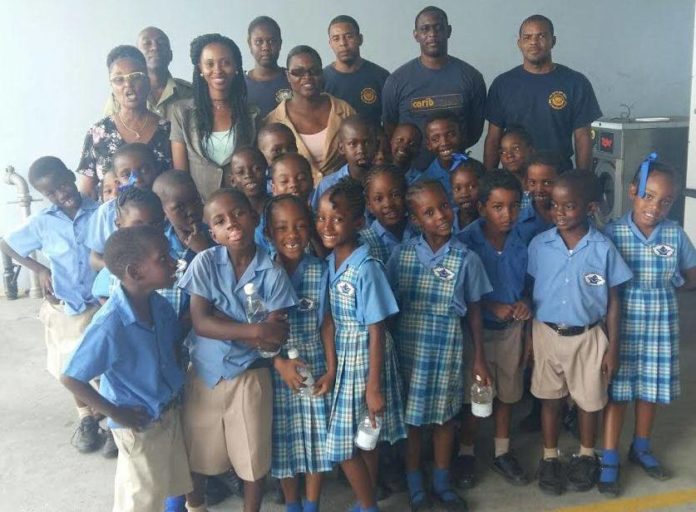 Photo:  Students from the Edgar T. Morris stand with Inspector Bergan (back row, left) of the RSCNPF and officers of SKNFRS during a visit to combined Police and Fire Rescue Station Tabernacle (RSCNPF photo)

Basseterre, St. Kitts – Government’s budget for the 2018 fiscal year will include funding to construct a modern building in Sandy Point that will house a police station. The new workspace will be conducive to greater efficiency by the officers when they are on duty, and will also provide a more comfortable environment during their downtime.

“It will have a lot more space for the officers,” Assistant Commissioner of Police (ACP) Merclyn Hughes said.

To this end, the building will have a recreation room where the officers can engage in activities such as playing table tennis and dominoes. A space will be dedicated for gym equipment, while a basketball court will be featured at the back. “It is a lot of stress being a police officer … so having an area that will have facilities for sporting events is very welcoming,” the assistant commissioner stated.

She added that this design is expected to be the model for police stations going forward, while noting that residents from the surrounding communities would be encouraged to stop by the police station and engage the officers in friendly competition in games such as cards, dominoes, draughts/checkers and basketball. Hughes said that this is in keeping with the public outreach that the Royal St. Christopher and Nevis Police Force (RSCNPF) promotes through its community policing programme.

This public outreach has extended into the planning and design stages, which have employed a consultative approach. “We have had our input,” Hughes said, referring to the building design. She added, “It is a holistic thing … it’s the Public Works engineers, the police, the fire, the court and [several people] from the community who gave us ideas as to how to make it attractive for all concerned.”

While the new building is expected to serve as a headquarters for Police Division “B” – which spans from West Farm westwards going on to Lodge – it will also accommodate officers from the St. Kitts and Nevis Fire and Rescue Services (SKNFRS) and host the District’s Magistrate Court, which is currently housed in Dieppe Bay.

Hughes said the police first moved into the current building in Sandy Point 20 years ago –  March 19, 1997. She noted that the facility was an improvement over the station they had moved from, and the time has now come for a more modern workspace.

At his press conference on Wednesday (October 25), Prime Minister the Honourable Dr. Timothy Harris, who is the Minister of National Security, outlined the intention to construct the new facility, which is in keeping with his government’s commitment to improve the working conditions of the men and women serving in the security forces.