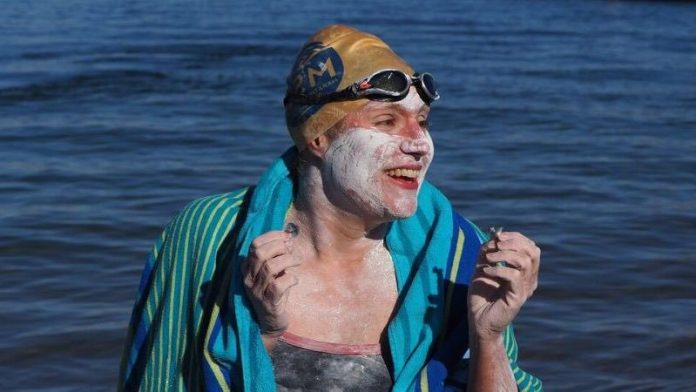 A cancer survivor has become the first person to swim across the English Channel four times in a row non stop, close to 130 miles.

Sarah Thomas, 37, began the epic challenge in the early hours of Sunday and finished after more than 54 hours.

The open water ultra marathon swimmer – who completed treatment for breast cancer a year ago – dedicated her swim to “all the survivors out there”.

The swim was due to be about 80 miles but because of strong tides Ms Thomas ended up swimming closer to 130 miles.

Ms Thomas completed the final leg on Tuesday at about 06:30 BST. Speaking to the BBC after she came ashore, she said: “I just can’t believe we did it.

“I’m really just pretty numb. There was a lot of people on the beach to meet me and wish me well and it was really nice of them, but I feel just mostly stunned.”

She said she planned to sleep for the day, adding: “I’m pretty tired right now”.

Swimmer Lewis Pugh said in a tweet: “Just when we think we’ve reached the limit of human endurance, someone shatters the records.”h

Ms Thomas, from Colorado in the United States, said the hardest part of the swim was dealing with the salt water, which left her throat and mouth sore.

But she added: “My crew was really great about helping me out and keeping me strong.”

“Every length had something that was really hard about it. Coming back from France the last time was definitely hard. It took forever and the current pushed me all over. 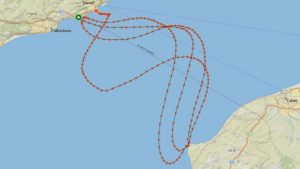 “I got stung in the face by a jellyfish and it wasn’t as cold as I thought it might be but it was still chilly.”

Only four swimmers had previously crossed the Channel three times without stopping. Before Ms Thomas no-one had ever completed a fourth leg.

Her mother, Becky Baxter, told BBC Radio 4: “I’ve been on a lot of her trips. This was by far the scariest.”

She said her daughter was a “freak of nature” but did have “a lot of trouble with stomach ache” on this trip.

“We were a little worried at the end of the first day as she was not able to hold anything down,” she said.

For nutrition, she relied on a protein recovery drink mixed with electrolytes and a little bit of caffeine to help offset sleepiness.

“It is tied to a rope and we get her attention every 30 minutes and throw it to her,” Ms Baxter said.

Last year Ms Thomas had treatment for breast cancer and her support team said she “used the swimming as her means of coping with the treatment”.

Official observer Kevin Murphy said: “It is a triumph, she has tested the limits of endurance. “It is amazing, absolutely inspirational. At the end we were very emotional.”

She completed her first open-water event in 2007 and first swam across the Channel in 2012 and then again in 2016.

Sarah Thomas said it was worth the physical exertion: “I almost didn’t go back when I got back to England.

“I thought I should just finish and quit, but my team said, ‘Guess what? You can do better. You can keep going’.”