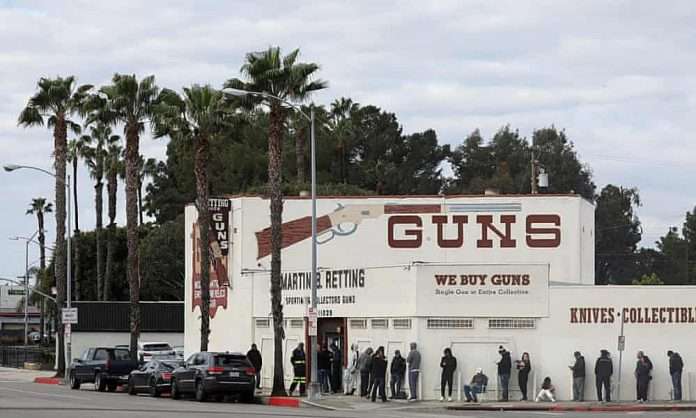 Estimated number of US gun owners has grown by 20 million in recent years, which experts say may lead to more firearm deaths

Americans bought an estimated 150m guns in the past decade, as a drumbeat of mass shootings and other violence has convinced more people that owning a gun for self-defense will make them safer.

In a country where the leading cause of gun death is gun suicide, public health experts say a growth in gun ownership is likely to lead to more deaths.

In the 10 years since the mass shooting at Sandy Hook elementary school, the US gun safety movement has gained some political power, while the National Rifle Association has been weakened by internal disputes and legal battles. At the same time, overall gun ownership in the US appears to have grown.

People who choose to own guns are still a minority of the US population, with about a third of Americans saying they personally own a gun, and fewer than half saying they live in a house with a gun, according to survey estimates.

The number of Americans who choose to carry guns in public also appears to be rising, with 16 million people saying in 2019 that they carried a handgun at least once a month, and 6 million saying they did so daily, according to a new research study. That’s roughly double the number who said they regularly carried handguns in public in 2015.

Surveys over the past few decades show that an increasing proportion of Americans say they own a gun for self-defense, not hunting or recreation, said Deborah Azrael, a Harvard firearms researcher. In 2021, Gallup found, 88% percent of gun owners cited “crime protection” as their reason for owning a firearm.

Americans’ perception of the risk of crime and violence has often not lined up with reality: Gallup also found that, for nearly three decades, large majorities of Americans said almost every year that crime had risen nationally since the year before, even in the years when it was falling sharply. In 2013, Pew found that the majority of the public was simply unaware that the country’s gun homicide rate had fallen nearly 50% since 1993.

In the past three years, the coronavirus pandemic, nationwide protests against police violence and the insurrection at the US capitol supercharged US gun sales, with an estimated 5 million Americans becoming gun owners in 2020 and 2021, researchers found.

The top reasons for buying a gun early in the pandemic, according to a survey of California residents, were concerns about lawlessness, concerns about people being released from prison, the “government going too far”, and “government collapse”.

“When social problems happen, guns are one of the tools at the disposal of Americans”, and for many Americans, they are “a familiar tool”, Jennifer Carlson, a sociologist who studies US firearms culture, told the Guardian in an early 2020 interview, as gun sales surged. “If there’s a run on toilet paper, what’s going to be next? It’s just the prudent thing to get a gun.”

The majority of US gun owners are still white men, and the largest proportion live in the South, according to survey data. But research studies and gun industry sources agree that the demographics of gun ownership is shifting, with women estimated to make up half of new gun purchasers since 2019, and people of color making up nearly half, according to one major survey. Between 2019 and 2021, an estimated 5% of Black adults in the United States bought a gun for the first time.

Because of the political influence of gun rights advocates, there is no official government data on how many Americans own guns, or even exactly how many guns there are in civilian hands. Estimates range from 345m to 393m to more than 420m, according to the firearm industry trade group’s most recent data.

While there’s lots of interest in the eye-popping total number of guns in the US, “what matters is how these guns are distributed across people and households”, said Matthew Miller, a Northeastern University professor who specializes in firearm research, and what that distribution means for their increased risk of gun suicide, homicide or accidental injury.

His 2021 study found that a surge of gun buying before and during the pandemic meant that an additional 5 million US children now live in households with guns.

The best proxy for US gun sales over time is examining the number of federal criminal background checks conducted on gun sales by licensed firearms dealers. (In many states, individuals can sell guns to each other without any background check.)

Two widely cited estimates, both based on the Bureau of Alcohol, Tobacco and Firearms’ background check statistics, put the number of gun sales in the US since January 2013 at around 150m, though that figure is likely an undercount.

Because Americans can buy multiple firearms at one time with a single background check, and because some states also allow people with a concealed weapons license to buy guns without background checks, the actual number of gun sales in the past decade is almost certainly higher than 150m, said Mark Oliva of the National Shooting Sports Foundation, a gun industry trade group that estimates there were at least 152m guns sales since January 2013.

At the same time, the number of background checks over the past decade will also include some double-counting of the same guns re-sold between people, said Jurgen Brauer, the co-founder of Small Arms Analytics, a firearms data company. Brauer estimates that, by the end of December, the total number of US gun sales in the past decade will reach nearly 164m.

Gun deaths have been rising in recent years, with a stark 35% increase in the nation’s firearm homicide rate in 2020, but a study that examined the pandemic surge in gun sales and increase in gun murders at the state level found no evidence of a clear association.

There were nearly 21,000 firearm homicides and more than 26,000 firearm suicides across the US in 2021, according to preliminary data from the Centers for Disease Control and Prevention (CDC).