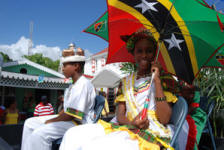 (Charlestown, Nevis) – Saturday brought controversy to Culturama in the double crowning of De Inspirer in both Junior and Senior Kaiso Monarch positions in the calypso competitions.

Opinions vary greatly in the public at large about why the 14-year-old won both competitions.

Husani Parris, aka De Inspirer was allowed to compete because he showed skill beyond his years, according to Culturama Chairman Halstead “Sooty” Byron.

“We saw real potential in De Inspirer and for the sake of the art form decided to let him compete,” Mr. Byron said. “This young man is a real talent and I cannot see him waiting until he is 18. We need to look beyond the little stuff because I believe he has the fortitude and the commitment to compete with seniors.”

In the past, contestants had to be 18 to compete in the Senior Kaiso competition.

But after De Inspirer took both crowns, it fired controversy in the public. Plenty of people on Nevis were talking about this issue, but none of them wanted their names used. 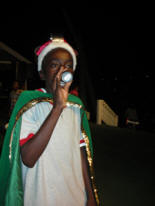 “If they were going to let him compete in the Senior, then he should have been excluded from the Junior competition,” said one woman.

“Some say he won because he is only 14, but I was there. I heard him perform and I don’t know him so I give no favoritism when I say, that boy was on the mark. His performance was the best at the show and he deserved to win. I don’t know if it was fair that he won two crowns, but in my opinion, no one should complain about him taking the Senior crown,” said another woman.

“I think they gave it to him because of politics. He was supported by the committee and the government and that was why he won,” said one man.