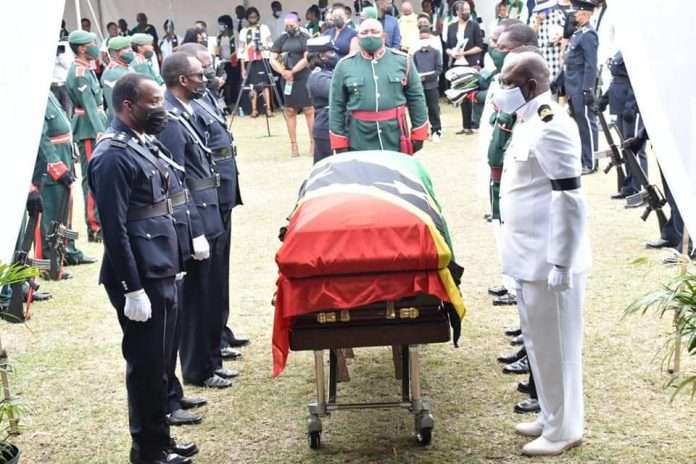 The Federation and the wider region said their final goodbyes to the former Premier of Nevis Saturday at his funeral service and subsequent burial in his home of Gingerland.

Amory’s state funeral service was held at the ET Willet Park in Charlestown and attended by dignitaries locally and regionally including the Governor-General, Prime Minister, Premier of Nevis, Palimentrians Federally and Locally as well as  Ministers of Governments from around the region. 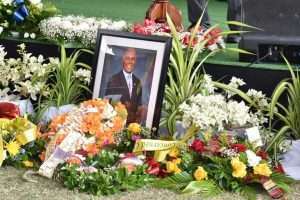 Giving a tribute at the service prime minister Dr Timothy Harris said that Amory’s service has vastly benefited the nation’s advancement and his leadership.
“We are better today as a nation and as a people because of the profound lessons received from a prominent stalwart who resolutely refused to accept and perform service that was stained by mediocrity and self-aggrandisement. 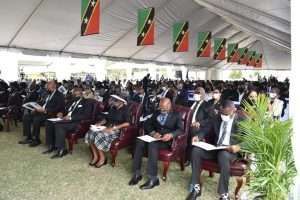 ‘I am a better person today because his excellency taught us the value of knowledge and excellence. He carefully knitted in the hearts of every educator scholar and student of our nation that knowledge and excellence must be diligently pursued.”
Murray Amory brother of the late premier delivering the eulogy highlighted some of Vance’s achievements throughout his public life.
“He was our beloved national cricketer, our beloved headmaster, our beloved politician, bank manager…he was our beloved premier and government minister. 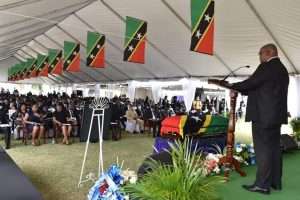 “Many of us dream to become even one of those in our lifetime but Vance achieved them all. How is it possible for one man to achieve such positions in one lifetime and still carry them with the charm, poise, humility and distinction that he did.”
Amory’s casket following the service was then placed on a wagon pulled by a truck and headed towards Gingerland where he would be buried.
Many Nevisians lined the streets to get a final glimpse of their longest-serving premier before he was buried at St George’s Anglican Cemetery next to his mother.
- Advertisement -