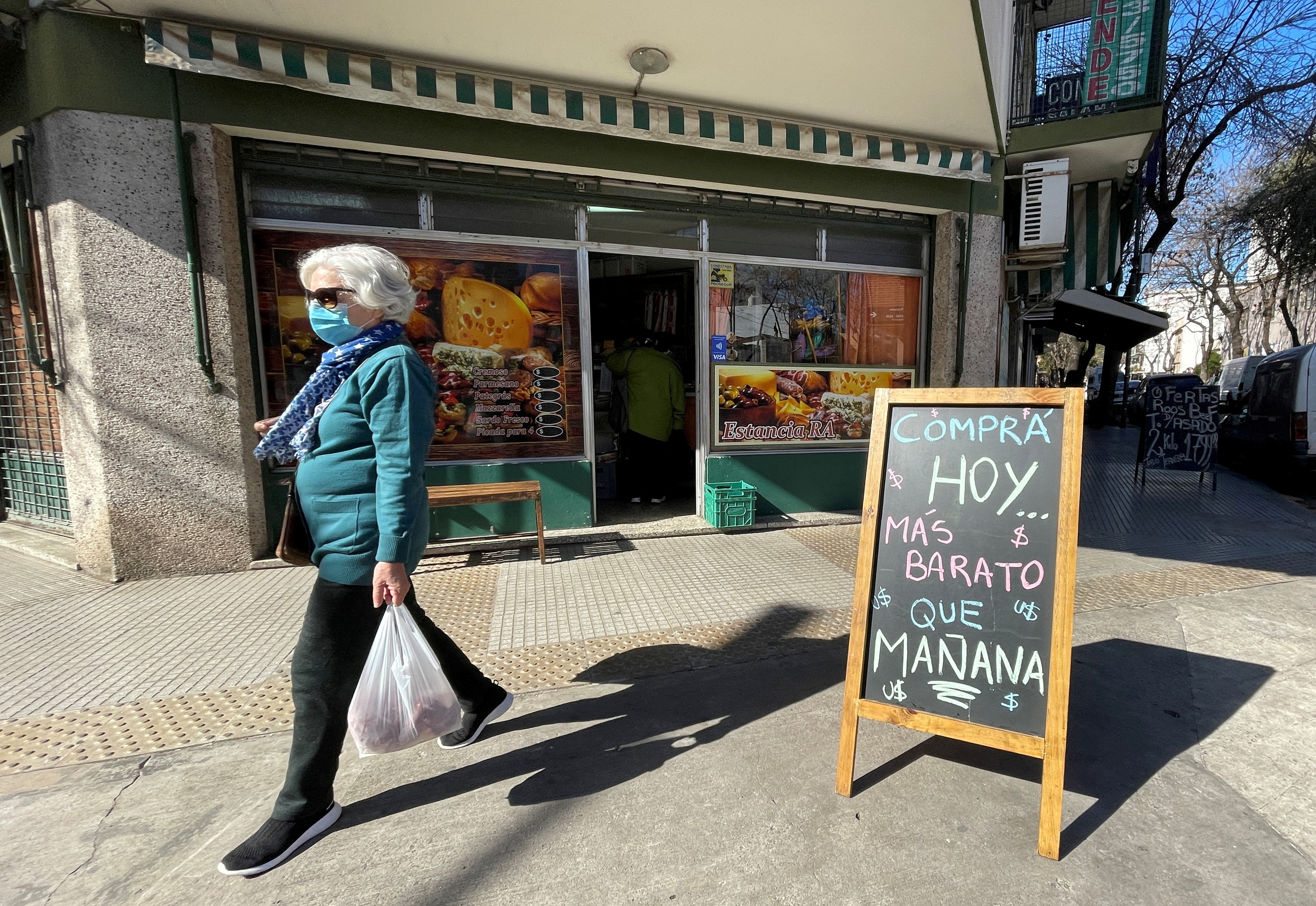 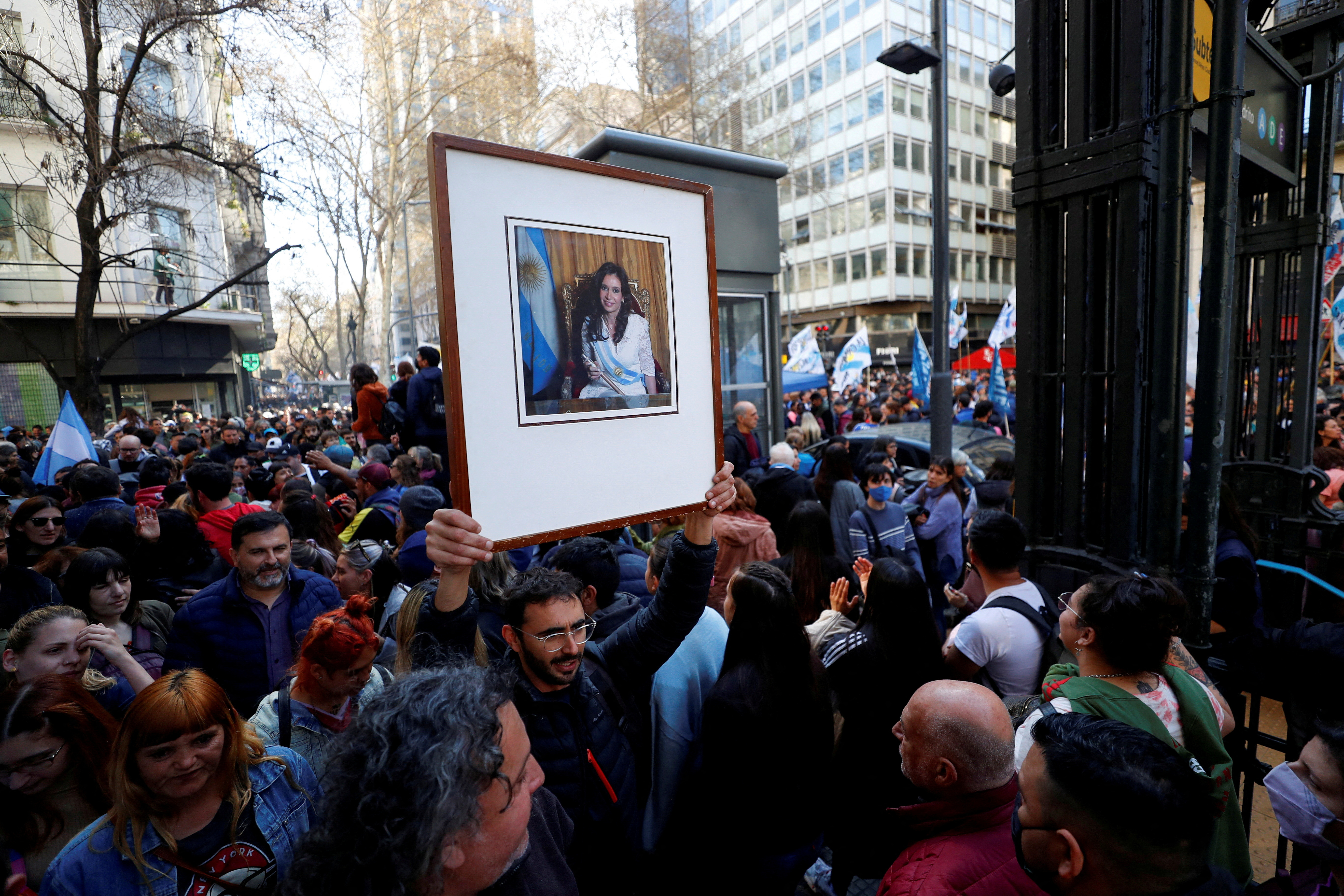 A man holds a picture of Argentine Vice President Cristina Fernandez during a march to protest against an incident in which a man pointed a gun at her outside her home, in Buenos Aires, Argentina September 2, 2022. REUTERS/Agustin Marcarian/File Photo

BUENOS AIRES, Sept 20 (Reuters) – An assassination attempt in Argentina and spurts of election-linked violence in Brazil have emerged as the latest signs of growing political discontent in Latin America, creating a treacherous environment for incumbents of all stripes.

Latin America’s political arena has intensified with fallout from the pandemic, war in Ukraine, spiraling inflation plus fears of global recession.

Those hardships have all hit voters’ wallets in one of the world’s most unequal regions, driving deeper political wedges ahead of key elections and in some countries threatening democracy itself.

“There’s a lot more extremism,” said independent Argentine pollster Mariel Fornoni, referring to the current state of politics across Latin American. “And I think that reflects the inability of many governments to address citizen demands.”

Carlos Alvarado, Costa Rica’s center-left former president, said in an interview that polarization is trending all over the Spanish and Portuguese speaking region.

“The most simplistic messages, including populist ones, grab our attention and really call up people’s emotions in a context where there’s a high level of frustration, uncertainty, inequality and inflation,” he said. “Right now, a call to conciliation or negotiation doesn’t usually gain as much support.”

Recriminations over the apparent attempted assassination earlier this month of Cristina Fernandez de Kirchner, a leftist firebrand former president who currently serves as vice president, have only sharpened the divisions. read more

Buenos Aires Mayor Horacio Rodriguez Larreta, a potential presidential candidate next year, in a recent speech bemoaned the country’s “hellish pendulum” that swings from one extreme to another. The center-right politician pitched “building a broad consensus” as the only real solution, but without detailing a plan to do so.

The would-be conciliator is surrounded, however, by harder-line opposition figures who reject any overtures to factions within the ruling Peronist coalition, Fornoni, the pollster, said.

Voters in sharply divided Brazil face a choice during the first-round Oct. 2 election between Bolsonaro and Lula, though several minor candidates are also in the mix.

Lula has made some overtures to the center, including tapping a center-right former rival as his running mate who aides say could run economic policy if he wins. read more

The campaign homestretch has been marred by political violence including two killings. read more Bolsonoro, like former U.S. President Donald Trump two years ago, has suggested he can only lose if there is massive voter fraud.

In long-dysfunctional Peru, leftist President Pedro Castillo, who took office just over a year ago, is battling a corruption probe amid plummeting approval ratings. read more

And in Colombia, although the outcome of June’s presidential run-off was ultimately peaceful, both major candidates, including victorious leftist President Gustavo Petro reported having been targeted by violent threats during the campaign.

The authoritarian governments of Cuba, Venezuela and Nicaragua are beset by more basic divides, with critics assailing repression and the absence of basic democratic rights.

Salvadoran President Nayib Bukele has gone to great lengths to consolidate power while ordering more than 52,000 arrests in an anti-gang push since April but without due process. Last week, Bukele announced he would run for reelection in 2024 despite an explicit constitutional ban on consecutive terms. read more

Yet Bukele remains very popular, with an approval rating of 85% according to an August CID Gallup poll.

In Guatemala, the government of President Alejandro Giammattei has taken to jailing at least a couple dozen anti-corruption prosecutors and judges or pushing them into self-imposed exile. With presidential elections there set for next June, Giammattei’s approval rating stands at just 19%, a July CID Gallup poll showed. read more

Goldman argues that the United States, Central America’s overriding foreign influence over more than a century, must take much stronger action to reign in Giammattei and his enablers, including freezing bank accounts and imposing other sanctions.

But U.S. officials in Central America have mostly focused on containing spiking migration, another sign of the region’s discontent, while stressing it would take time to root out rampant corruption, promote development and buck up weak institutions.

“To sit there with your hands folded and do absolutely nothing as Guatemala slides down the same, horrible, slimy slope into dictatorship itself, it’s baffling,” he said.