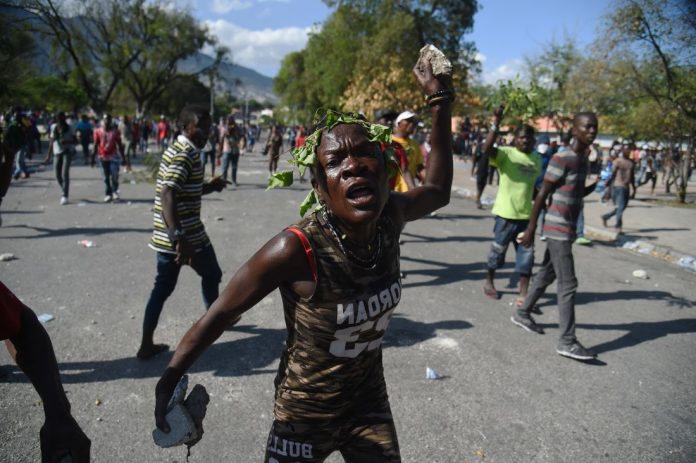 PORT AU PRINCE, Haiti (CMC) — The speaker of the senate, Carl Murat Cantave says he has been attacked by Opposition-linked supporters and several of his properties, including his medical clinic in Gonaïves in northern Haiti, had been burnt following the unsuccessful attempt to ratify Prime Minister Fritz William Michel on Monday.

He said the attackers were in the company of a senator and that “they grabbed me by the collar”.

Cantave said he was also deploring and denouncing the attacks on several of his properties by individuals who opposed the holding of the ratification session and who, according to him, were “paid to burn my clinic”.

While he did not name those involved in the act, he insisted that the perpetrators would “pay dearly”.

In addition to the arson attack, Cantave also reported that the premises of the building housing the political office of the president of the Senate were ransacked, and furniture and equipment thrown to the street before being burned.

The demonstrators also vandalised the premises of the Louise Gabrielle Foundation, which is owned by Cantave’s wife, and the Office of the Departmental Delegation of Artibonite was also ransacked.

Since then, the National Police of Haiti have deployed a protection force near his residence.

The newly appointed Minister of Youth and Sports Manouchka Néré was among those assaulted as demonstrators, unable to enter the facility, ransacked several companies, broke windshields, set two vehicles on fire, erected barricades of burning tyres and paralysed traffic while repeatedly confronting members of the National Police of Haiti, who responded with tear gas in a bid to restore order.

The protestors also set fire to a branch of Haitian Union Bank and looted and burnt the Propharma Pharmaceutical Agency, located on the upper floors of the building.

Last month, President Jovenel Moise had called on parliament to approve the nomination and Government of Prime Minister Michel, describing him as “a brilliant civil servant who has devoted his entire career to serving the people of Haiti”.

Michel, a former executive in the Ministry of Economy and Finance, became the fourth prime minister of this French-speaking Caribbean Community country, since President Moise became the head of State in 2017.

Monday’s sitting of the senate was adjourned without a new date being set for its resumption, after a legislator fired gunshots to defend himself against demonstrators who had entered the legislative compound.

“I defended myself. Self-defence is a sacred right,” said Senator Jean-Marie Ralph Fethière.

A photojournalist with The Associated Press was among two people wounded when the legislator fired his gun in the yard of the Haitian Senate.