Nearly 10,000 migrants, mainly Haitian, remain in worsening conditions in the impromptu camp that sprang up under a bridge spanning the Rio Grande from the Texas town Del Rio to Mexico’s Ciudad Acuna.

In recent days, U.S. authorities have removed at least 4,000 people from the site for processing in detention centers. Some 523 Haitians have been deported to their homeland on four flights, with repatriations set to continue on a regular basis, the U.S. Department of Homeland Security said.

Returnees reacted angrily as they stepped off flights at Port-au-Prince airport after spending thousands of dollars on arduous voyages from the troubled Caribbean nation via South America hoping for a better life in the United States.

On Tuesday, they found themselves back where they started.

A group of men in white T-shirts rushed back toward the plane after they disembarked in Port-au-Prince, with one man attempting to get back on board, Reuters witnesses said.

The migrants broke into a restricted area of the airport as they attempted to recover passports and personal belongings, and ground staff closed the door of the plane before the man could scale the steps back into the cabin.

Tempers ran high, exacerbated by news the Haitian government had accepted the deportations.

“I am angry at the government. We were told in prison that the Haitian government had signed to send us back to Haiti. They are all bad people, these authorities,” said Yranese Melidor, 45, who arrived on an earlier flight.

The disturbances underscored the instability in the Caribbean nation, the poorest in the Western Hemisphere, where a presidential assassination, rising gang violence and a major earthquake have spread chaos in recent weeks.

Filippo Grandi, the head of the U.N refugee agency, said U.S. expulsions to such a volatile situation might violate international law and could constitute refoulement, or exposing people seeking shelter to life-threatening situations.

U.S. Senate Majority Leader Chuck Schumer also called out Biden, a fellow Democrat, on Tuesday, saying it “defies common sense” to expel the migrants to Haiti and expressing anger over tactics used by border guards to control the crowds at the camp.

Vice President Kamala Harris said the situation was complex and that the United States needed “to do a lot more” to support the basic needs of people in Haiti.

“People want to stay home, they don’t want to leave home, but they leave when they cannot satisfy their basic needs,” she told reporters.

Republican politicians with an eye on the 2022 midterm elections, when they hope to retake control of Congress, have been quick to portray the sprawling camp in Texas as the result of Democrats’ push to end some migration restrictions.

The camp’s population peaked at up to 14,000 at the weekend, according to the U.N’s refugee agency.

On Tuesday, the camp on the U.S. side of the river had expanded into a nearby forest area as migrants sought shade and cover. Some families built makeshift tents with branches and leaves, while parents washed their children using jugs of river water. One toddler had an untreated hernia on his stomach. 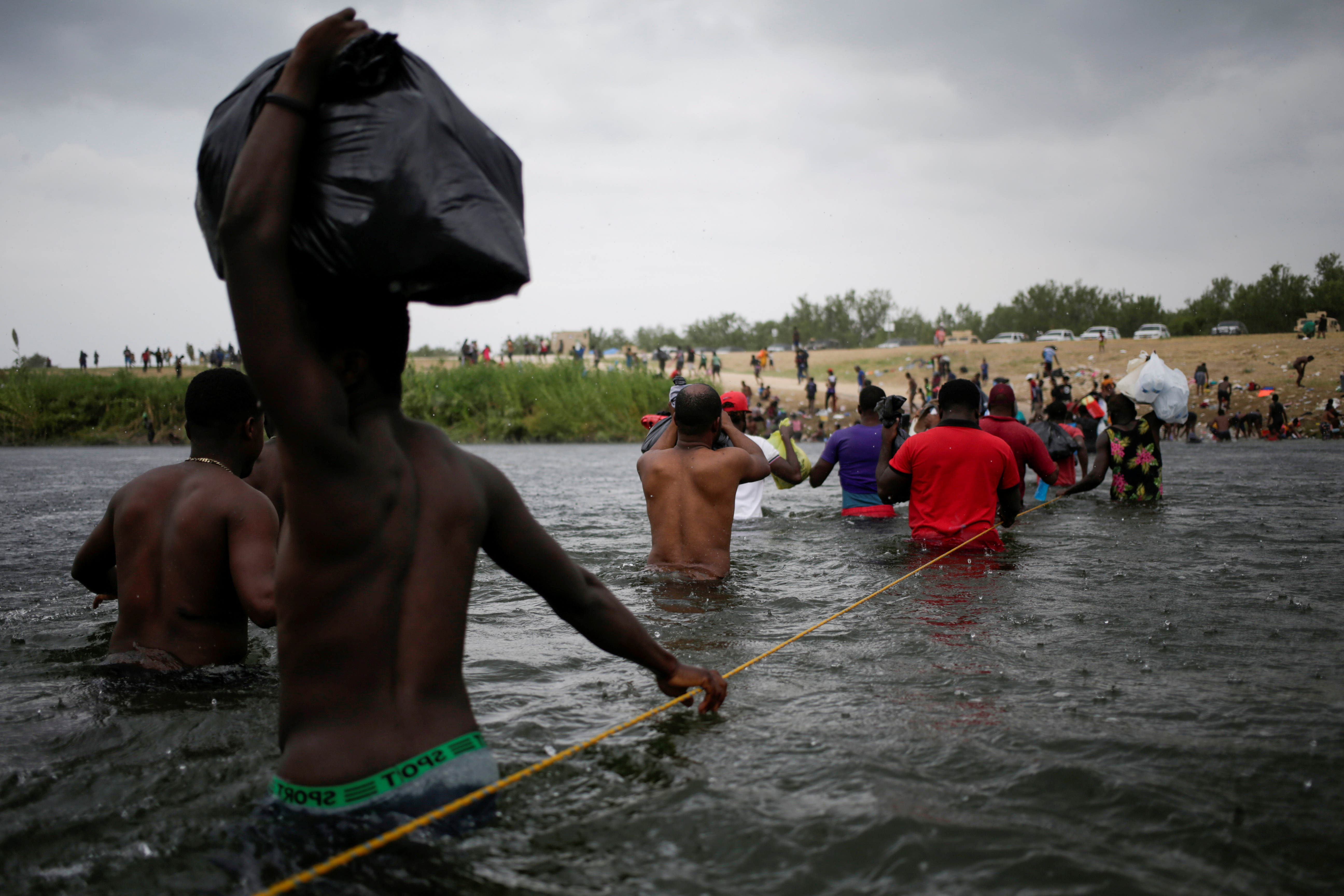 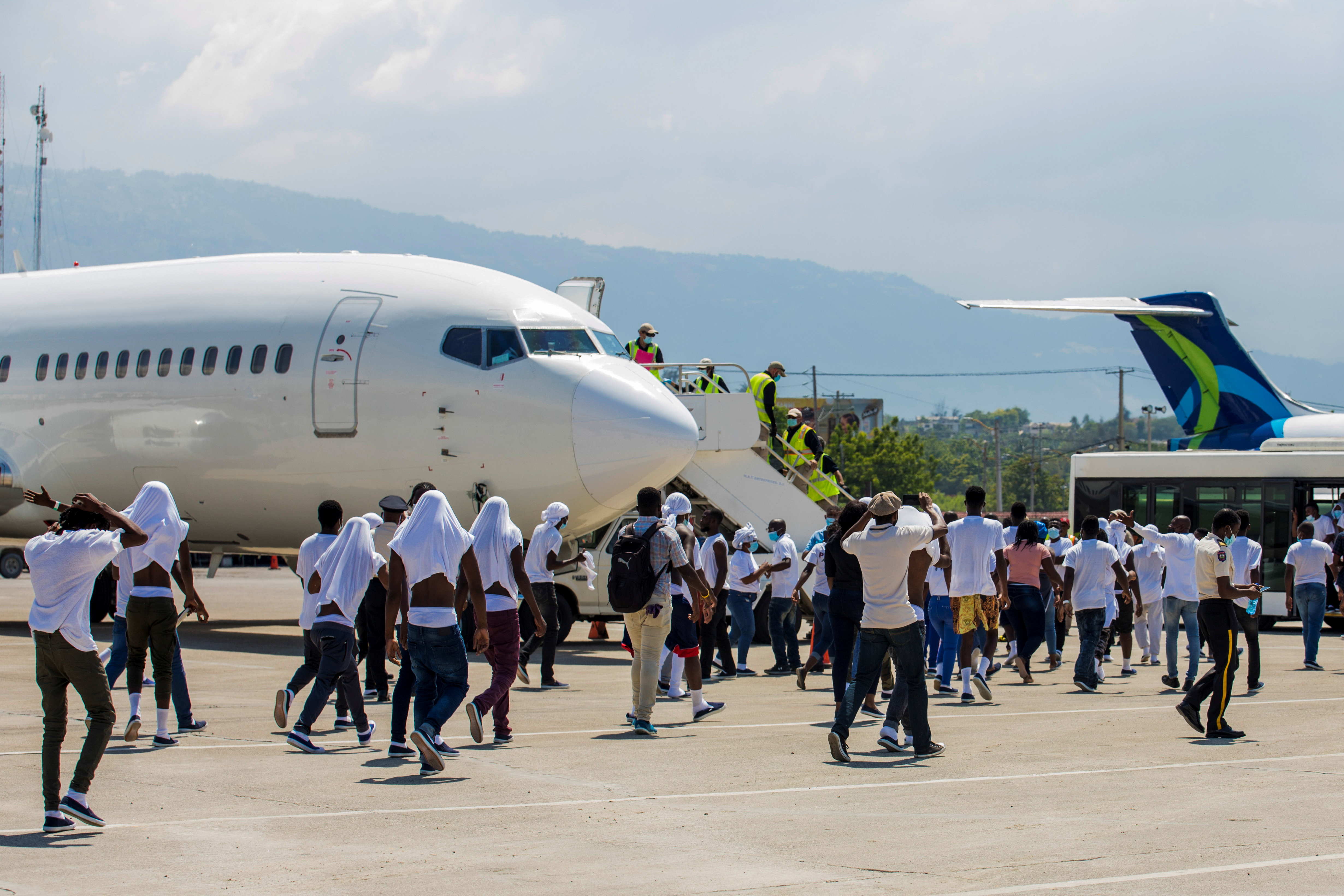 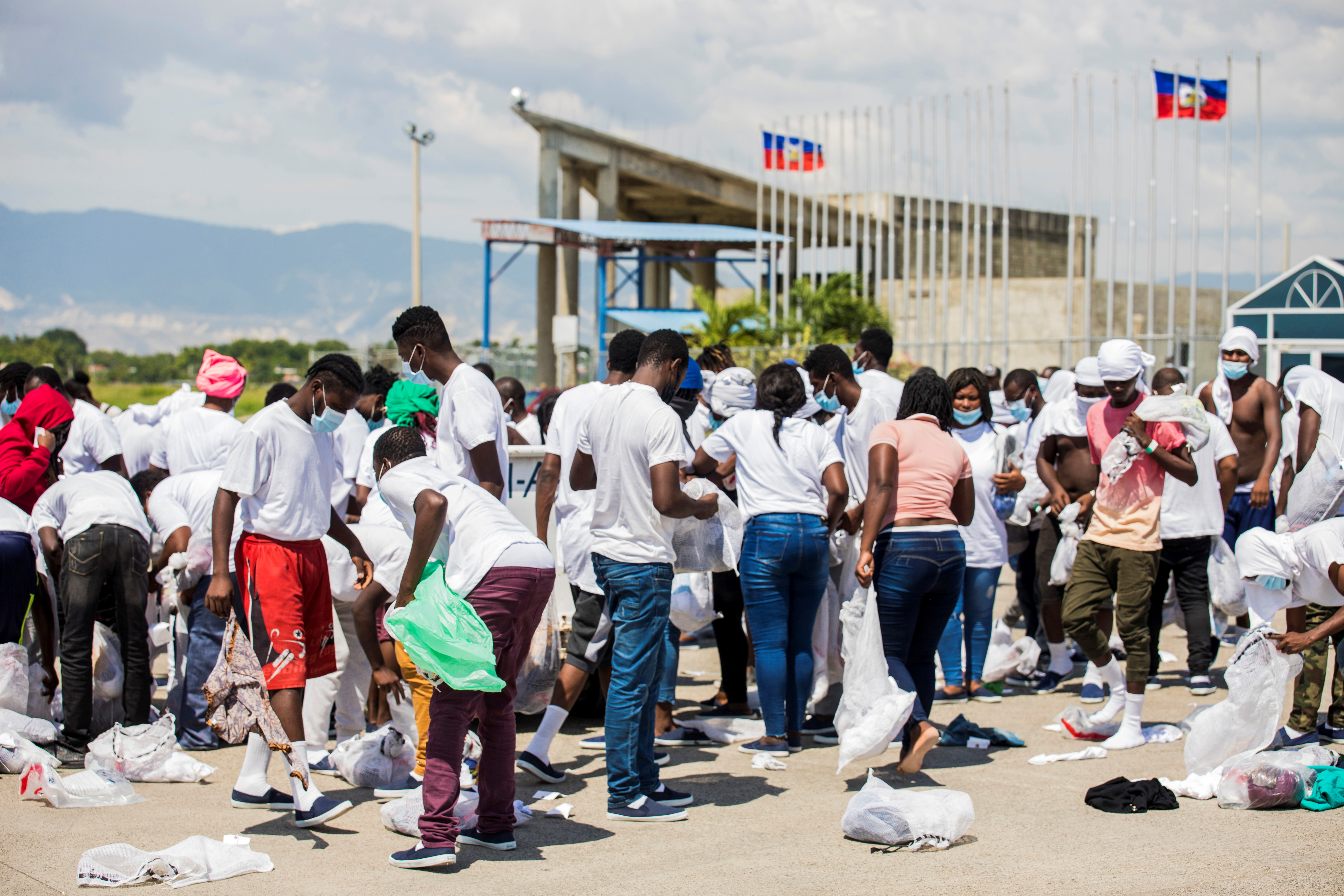 Migrants said food remained scarce and there were not enough portable toilets. In a small tent she had pitched under trees, a Haitian mother cradled her 15-day-old baby.

Fearful of the expulsions, some of the migrants have set up a new camp on the Mexican side of the river.

Mexican authorities also prepared flights and buses to Mexico’s southern states after it began detaining Haitians in Ciudad Acuna, just across the border from Del Rio. The removal transport appeared aimed at reducing the concentration around the camps.

Mexican and Haitian authorities held talks on Tuesday about how to deal with the migrant influx, with Mexico set to offer space for Haiti’s government to open consular offices in the southern cities of Tenosique and Talisman, close to the Guatemalan border.

They also agreed to schedule repatriation flights to Haiti for “for all those people of Haitian origin who wish to return to their country”, Mexican authorities said.

The new camp on the Mexican side has been growing, with migrants aided by groups, including the Red Cross and Doctors Without Borders, as well as the U.N’s migration agency.

Surreane Petit, who clutched her 3-year-old son at her side, said staying in Mexico was a huge improvement over the U.S. camp. “Here the Mexican people are helping greatly.”

“Over there we were hungry,” Petit said. “Under the bridge there was no help, no help.”

She said she had lived the last five years in Chile, where her son was born, but decided to leave after pandemic lockdowns made it hard to leave her house to find work.

Following an outpouring of anger over an incident in which mounted U.S. border agents in cowboy hats used horse reins like whips to intimidate the migrants, U.S. Department of Homeland Security Secretary Alejandro Mayorkas emphasized that U.S. border agents were delivering medical attention and working with the Red Cross.

Mayorkas said he was horrified by the images, echoing increasingly strident criticism from the White House, which said the footage “does not represent who we are as a country.”

The agents under investigation have been assigned administrative duties and are no longer dealing with migrants, Mayorkas said. He also ordered that the conduct of personnel in Del Rio be consistent with the policies, training and “the values of this department.”

Despite the risk of being returned to Haiti, many migrants remained in the Del Rio camp.

Carly Pierre, 40, said he was staying there because he saw a chance to make it into the United States with his wife and two children, ages 3 and 5, after several years living in Brazil.

“There are deportees and there are people who will make it in,” he said, his shorts still wet from having crossed the river to buy ice and soda at a convenience store on the Mexican side.