During his budget wrap-up, which came after four days of heated presentations and debates, Prime Minister Harris, who is also the Minister of Finance, said all indicators point to strong and robust economy in St. Kitts and Nevis.

“S L Horsford boasted, in 142 years since it began operating in St. Kitts and Nevis, it has had its best year under a Team Unity administration; something good is happening,” Harris said. “RAM’S Supermarket boasted its best financial performance ever in its history [and] that happened under a Team Unity administration, and it could never have happened if the economy was in slums, it could never have happened if the country was contracting in terms of the level of economic growth because where there is contraction it will be reflected in the sale and performance of all of these entities. Three consecutive years of tax free budgets, three consecutive years of surplus budgets, three consecutive years of positive growth in the economy [and] two years in a row of [paying] a double salary.”

Some of the capital projects earmarked to commence in 2018 are the second cruise pier, the rehabilitation of the Old Road Fisheries Complex, the continued roll out of the Unity Housing Solution Programme and upgrade of the Island Main Road. 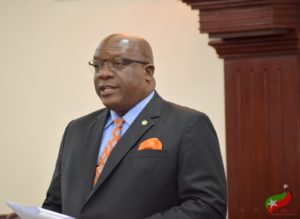