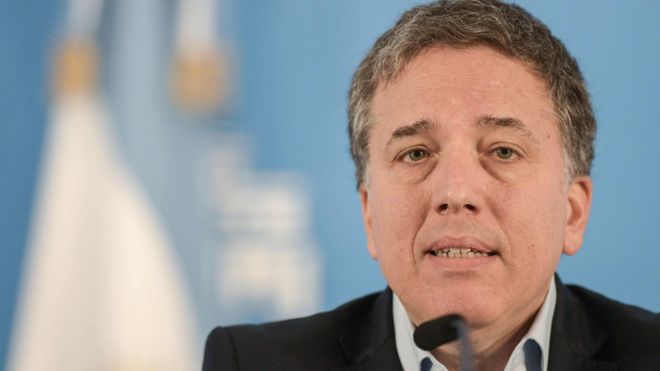 Argentina’s economy minister Nicolas Dujovne has resigned amid a financial crisis exacerbated by the president’s defeat in a primary poll.

The country’s peso shed 20 perecnt  of its value against the US dollar after President Mauricio Macri suffered the resounding loss last Sunday. In a letter to the president, Mr Dujovne said he had given his all.

Mr Macri was beaten in the primary elections by his left-wing rival Alberto Fernández. Mr Fernández’s running mate is former president Cristina Fernández de Kirchner who presided over an administration remembered for a high degree of protectionism and heavy-handed state intervention in the economy.

Fernandez won the primary with 47.7 percent of the votes with Mr Macri receiving 32.1 percent.

Days after the defeat, Mr Macri announced a series of measures including income tax cuts and increases in welfare subsidies. Petrol prices will also be frozen for 90 days.

“I believe my resignation is in keeping with my place in a government that listens to the people and acts accordingly,” he wrote.

He will be replaced by Hernan Lacunza, the current economy minister for Buenos Aires province.

A cabinet shuffle has been rumoured for several days.

Mr Macri was elected in 2015 on promises to boost Argentina’s economy with a sweep of liberal economic reforms.

After taking power, he sought to restore international trust in the economy with budget cuts and the elimination of subsidies.

In May 2018, he announced the country would be asking for a “preventative credit line” of $50bn (£41bn) from the International Monetary Fund. The deal was negotiated by Mr Dujovne.

Argentina is currently in recession and posted 22 percent inflation for the first half of the year, one of the highest rates globally. More than a third of the country’s population is currently living in poverty, according to official figures.