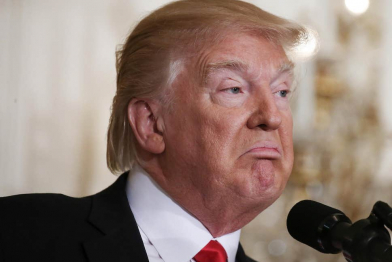 As America’s death toll from coronavirus topped 24,000 yesterday, Donald Trump continued his attacks on state governors and the media who have challenged his authority to end the lockdowns which have devastated the US economy.

He also announced at a Rose Garden press conference that he had instructed his administration to halt funding to the World Health Organisation, claiming that it had mismanaged the coronavirus outbreak in China.

It’s been a combative week, even by the President’s standards. On Monday, he rejected the idea that the decision to end lockdown was up to state governors, claiming he had “total authority” and that “the President of the United States calls the shots”

Trump believes he has not received nearly enough credit for the federal response to the pandemic. He said: “We’re very close to completing a plan to open our country, hopefully even ahead of schedule.” But he offered few detail

Trump is under intense pressure from some quarters to reopen the country, even as his medical advisors are urging caution. If he were to lift the social-distancing guidelines prematurely, he could be risking another surge in cases.

But with unemployment rising to levels last seen during the Great Depression of the Thirties, and the economy falling into recession, the financial costs of keeping America closed are rocketing.

Profits at America’s banks are collapsing as they set aside money to cover customer defaults caused by the pandemic.

A Wall Street Journal survey of economists this month predicts 14.4 million jobs will be lost in the coming months, bringing the unemployment level to 13 per cent in June, from a 50 year low of 3.5 per cent in February. Around 17 million Americans have sought unemployment benefits in the past three weeks

Today some 80 million Americans will start receiving government support cheques for $1,200. This is the most visible piece of the government’s multi-trillion-dollar effort to keep the country going. Even the most optimistic projections suggest that a long period of economic stagnation will follow the lifting of the lockdowns.

Trump is now planning to create an advisory council to help him make the decision about reopening the economy. All that is known so far is that he will not be including his daughter, Ivanka, or his son-in-law, Jared Kushner, both of whom have been closely involved in the White House’s response to the pandemic.

With the presidential election in November, Trump has little time to waste if he wants voters to feel any positive effects that might be generated by his response to the crisis before they go to the polls.

Traditionally, times of national emergency have been very good for presidents’ approval ratings, which can soar up into the 70-80 per cent range as Americans rally around their leader. Trump’s ratings, however, are stuck at 50 per cent.

The President’s campaign manager, Brad Parscale, yesterday laid out what will likely be the key themes of Trump’s re-election campaign: “President Trump has now assumed the role of a war-time chief executive against an invisible enemy while supporting millions of Americans who are facing health threats and economic hardship as a result of this pandemic. That’s good; the nation needs his steady, confident leadership… The President’s first duty is to protect the health of all Americans and preserve our economy’s ability to bounce back after this unforeseen, foreign-born crisis is over.”

The Democratic National Committee said the President “commandeered the briefing to run campaign propaganda to soothe his small ego and pathetically try to cover up for his own failed response.”

Trump has even picked a fight with Anthony Fauci, the esteemed epidemiologist leading America’s medical battle against the virus. Fauci often talks in the hypothetical and academic terms of a scientist, which frustrates the President. At the weekend, Fauci said that had Americans started social distancing earlier, then there might have been fewer deaths.

An angry Trump then retweeted a tweet calling for Fauci to be fired. They appear to have since made up. Losing Fauci, who is widely respected, would be disastrous for the President at this point.

Trump has also been frustrated to see his own popularity languish while individual governors have been lavished with praise for their handling of the crisis.

Governor Andrew Cuomo has been particularly visible, as New York City and the state have been especially hard hit. Yesterday Cuomo said the death toll in New York was “basically flat at a devastating level” with 778 more deaths over the previous 24 hours, and nearly 11,000 so far.

Cuomo has formed a working group with the governors of neighbouring states to come up with a plan, as have a group of governors on the west coast. He said yesterday that Trump was “clearly spoiling for a fight” over whether it was up to him or governors to reopen their states.

Trump tweeted in response: “Cuomo’s been calling daily, even hourly, begging for everything, most of which should have been the state’s responsibility, such as new hospitals, beds, ventilators, etc. I got it all done for him, and everyone else, and now he seems to want Independence! That won’t happen!

The pandemic has pushed the presidential election to one side. But the Democratic Party has been busy in the meantime rallying around their candidate, former vice-president Joe Biden, who this week received the endorsements of his former rival, senator Bernie Sanders, and his former boss Barack Obama.

Obama has been lurking below the surface for most this election season. His one message to his party has been that they would be better off choosing a candidate early and getting behind them than letting a vicious internal primary seasons drag into the summer.

However, yesterday he released a video in support of Biden. While he didn’t mention Trump by name, he laced his message with criticism of his successor.

Biden, he said, would surround himself with experts “who actually know how to run the government”. Republicans, he warned, have “a massive war chest. The other side has a propaganda network with little regard for the truth”. The coronavirus had shown that “good government matters — that facts and science matter.”

Biden wrote in a tweet. “Barack — this endorsement means the world to Jill and me. We’re going to build on the progress we made together, and there’s no one I’d rather have standing by my side.’’

Most polls currently have Biden comfortably beating Trump in November. But Obama’s support came at a critical moment, just as many Democrats were beginning to wonder if they had settled on the right candidate. Biden

’s interventions since the pandemic started have been blithering and out of touch. He has seemed irrelevant as Democratic governors like Cuomo and Gavin Newsom in California have become admired national figures.

Trump’s campaign manager Parscale, however, welcomed Biden’s selection and Obama’s endorsement as terrific news for the President. He said: “Biden is a bad candidate who will embarrass himself and his party. President Trump will destroy him.”