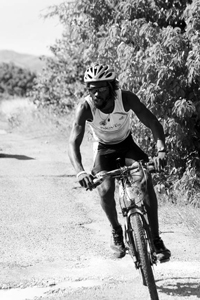 (Newcastle, Nevis) – February 3 was a beautiful day for a mountain bike race.

The course had a total of 20 bikers and the race started below the Vance W. Amory International Airport at the start of the 10k mark.

Both elite male, female and youth did seven laps of the 1.66 mile loop.

Males: The race started real fast. As the top guys turned at the Mount Nevis sign, Reggie, who was there just to see where his fitness level was, was out front pushing the pace and paying James back for his loss at the recent St Kitts Criterium. Really putting down the hammer as he dropped a hard charging Matt Brown (USA) on the second lap and went on to win the race.

Reggie completed the course in 44:42.

Females: Kristina Stoney was out front and looked like she was not going to give up the lead as she were pushing hard for first place, Matt’s wife Stephanie Brown was chasing hard, with first time mountain bike racer Sarah Petre-Mears having a go, but Kristina was more comfortable on the course and came in first with time to spare.

Kristina completed the course in-55:54

In her first outing, Sarah managed to complete two laps.

Youths: the Newcastle Development Squad, the new racing team on the block, which already had been competing in a few races before and indeed they love the off road. One member from the Cotton Ground crew took part in the event and did really well.

Dion Clarke finished the course in 59:57

The club out of Cotton Ground:-

On Sunday, Feb. 3, I competed in my first mountain bike race, and it was awesome! Reggie had made a fine track in the hills in front the airport, Nevis.

There was a great turn out, the regular Nevis Cycle and Triathlon Club crew, some international players, youth club representatives, medical school students, and a large number of youths from different communities. It was a clear windy day; the course was a seven loop circuit up a gravel road, and down a single track. I loved riding down, jumping rocks, dodging tree stumps and boulders, and nearly fearlessly flying downwards. The grass was tall and golden, hiding all the potential dangers within. Luckily for me, maybe skillfully for others, I made it to the bottom each time and then wound around for the ascent. My battle was with Don during this race and he won …. Not again, though; next weekend we will meet to contest again, the same course, but 10 loops. Reggie finished first and did an extra lap, as did his friend from Kansas, Matt, who came in behind him. James and Keith followed not long after, and Stephanie, also from Kansas, finished the course directly after me. Winston was busy having a pizza, but is looking forward to getting in the mix this weekend coming. And so could you! Be a part of the fun and sport, there were individuals between the ages of 10 to 77, of all disciplines and on all manner of bikes.