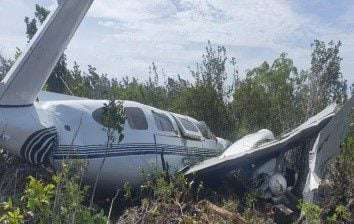 - Advertisement -
By Santana Salmon
CNW- Bahamian authorities have confirmed that a woman was killed and others injured when a twin-engine aircraft with seven people on board crashed in bushes near Deadman’s Cay Airport in Long Island on Sunday.

“Seven souls were on board a twin-engine aircraft that went down in bushes approximately two miles from Deadman’s Cay Airport,” Police Commissioner Paul Rolle said, adding “one adult female has succumbed to her injuries”. The identity of the woman has not been given.

“Police have located the site using coordinates given and are assisting victims with evacuation for medical assistance with the assistance of US Coast Guard helicopters,” he added.

Deputy Prime Minister and Minister of Tourism, Aviation and Investment Chester Cooper said all agencies of the government are engaged in what he described as “a rescue operation”.  The authorities have not said whether those in the crash were all from the Bahamas.

Information is limited but the Aircraft Accident Investigation Authority (AAIA) said the plane is reported to be a Piper Navajo, which crashed on take-off from Deadman’s Cay

Investigators from both the AAIA and the Civil Aviation Authority of the Bahamas are expected to continue their investigations into the fatal crash on Monday.