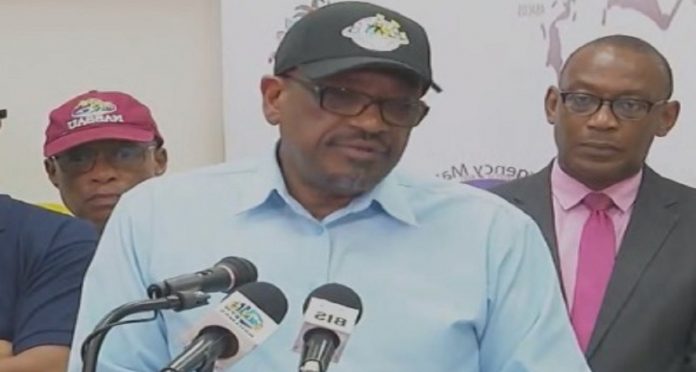 Prime Minister Dr, Hubert Minnis Wednesday said 20 people had now died as a result of the passage of Hurricane Dorian and warned persons who were engaged in looting and other criminal activities that the authorities would prosecute them to the full extent of the law.

‘There are many on Grand Bahama who are suffering and as the Minister of National Security (Marvin H. Dames) may have said earlier…there have been 20 confirmed deaths on Abaco. We expect that this number will increase and we will update the public as soon as we receive more accurate information,” Minnis said.

He said “just about every Bahamian throughout the country has been worried about loved ones on Grand Bahama and Abaco. They have all heard the stories and accounts of looting and other disturbances. Bahamians are distressed that anyone would loot and further the suffering of those affected by this tragedy.

“This is a terrible disregard for the safety and security of others. Be warned we will prosecute looters and other law breakers to the full extent of the law. We are a country of law,” he said, adding that he has mobilised the full resources of the government for rescue missions in both Abaco and Grand Bahama.

Minnis also announced that 200 members of the Defence Force in Jamaica will be assisting in law and order actives in the two affected countries.

In an emotional address, Minnis, who confirmed that his brother had died in the United States, not as a result of the hurricane, said that he had also been in discussions with a number of regional and international leaders, including President Donald Trump, Canadian Prime Minister Justin Trudeau and a senior official of the United Nations, all of whom have all pledged assistance in helping the country re-build.

Minnis said he had been able to visit Grand Bahama, one of the two islands in the archipelago that bore the full brunt of the Category 5 hurricane when it hit the country on Sunday with winds in excess of 180 miles per hour.

“There are a significant number of people in shelters,” he said, noting that many homes had been destroyed.

“But what was most significant those homes that were built on stilts were not damaged,” he said, noting that in Freeport, the flooding had receded “and most homes in Grand Bahama appeared to have received minor damage.

“Freeport infrastructurally had done well. However from the humanitarian perspective we must consider the psychological impact that we will experience at a later date.”

But he promised that the response from the authorities “will be day and night, day after day, week after week, month after month until the lives of our people return to some degree of normalcy.

“The people of the Bahamas are already showing their compassion and love of their brothers and sisters of Abaco and Grand Bahama. Robust charitable efforts are underway across the islands not affected and I want to encourage again Bahamians to keep giving and volunteering with reputable charities with proven track records”.

But he again warned that “in this time of national crisis I advise Bahamians and residents to get their information from reputable and trusted sources” noting that in the social media age “there’s so much news that’s fake, inaccurate and misleading.

“Do not allow yourselves to be misled by fake news designed to confuse you. As a people we must stay united in a single focus during this most difficult time,” he said, noting that Bahamians and the international media must also spread the news that the rest of the archipelago is open for business.

“New providence must be the bedrock and command centre to rebuild both Grand Bahama and Abacos. We will rebuild better and stronger” he added.