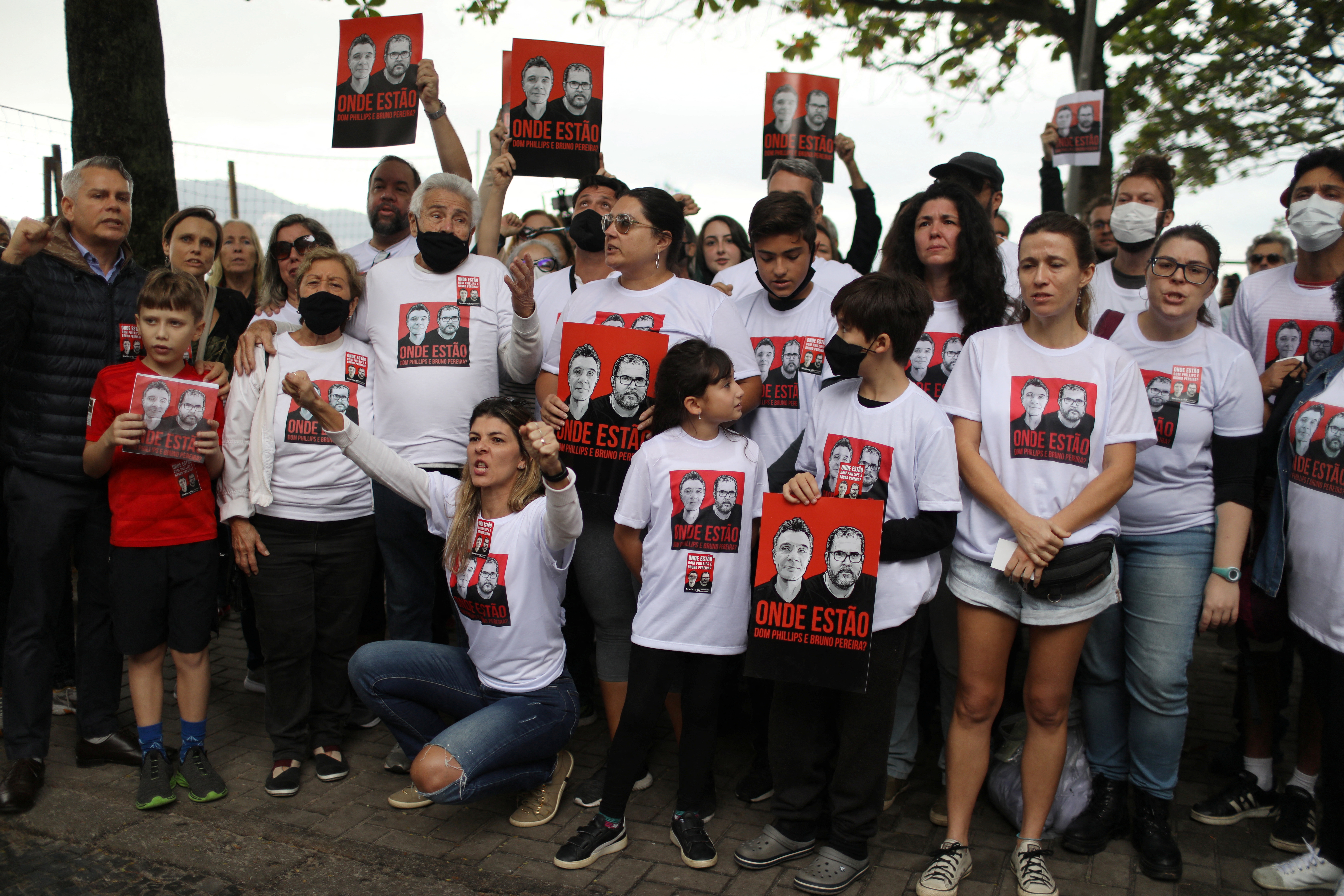 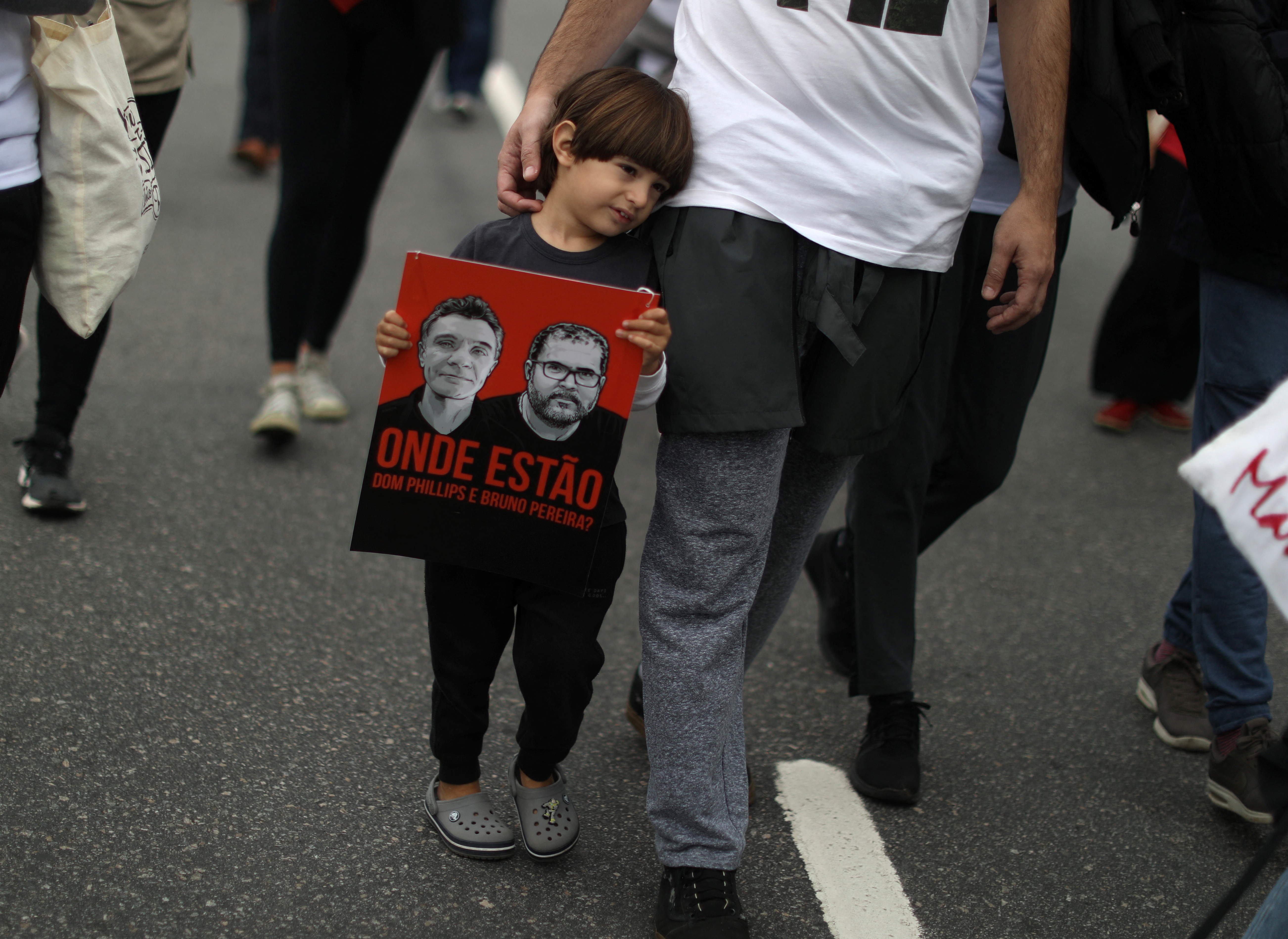 A police statement said clothing belonging to Pereira had been found, including a health identification card in his name, and a backpack with clothes belonging to Phillips, along with the boots of both men.

A fireman leading a search team told reporters that the Equinox backpack, containing clothes and a laptop, was found tied to a half-sunken tree trunk in the area that the two men were last seen on Sunday.

Earlier, Elizeu Mayaruna, who works for indigenous agency Funai, told Reuters that, while searching the forest along the Itacoai river on Saturday, he found clothes, a tarp and a bottle of motor oil.

Mayaruna and two other members of an indigenous search team acquainted with Pereira, a former Funai official, said they recognized a shirt and pants that belonged to him.

Witnesses said they saw Pereira and Phillips, a freelance reporter who has written for the Guardian and the Washington Post, traveling down that river last Sunday.

The two men were on a reporting trip in the remote jungle area near the border with Peru and Colombia that is home to the world’s largest number of uncontacted indigenous people. The wild and lawless region has lured cocaine-smuggling gangs, along with illegal loggers, miners and hunters.

News of the pair’s disappearance has resonated globally, with Brazilian icons from soccer great Pele to singer Caetano Veloso joining politicians, environmentalists and human rights activists in urging President Jair Bolsonaro to step up the search.

Reuters witnesses saw the stretch of riverbank were Mayaruna discovered the clothing cordoned off by police on Sunday morning as investigators scoured the area, with a half dozen boats ferrying police, soldiers and firefighters back and forth.

Divers also discovered on Sunday afternoon a large, black Equinox-branded backpack with books, a laptop and clothing inside, according to a report by newspaper O Estado de S.Paulo, which cited an Amazonas state firefighter spokesperson.

There was no immediate comment from the Brazilian government on the search findings.

President Jair Bolsonaro, who last year faced tough questioning from Phillips at news conferences about weakening environmental law enforcement in Brazil, said last week that the two men “were on an adventure that is not recommended” and suggested that they could have been executed. read more

State police detectives involved in the investigation have told Reuters they are focusing on poachers and illegal fisherman in the area, who clashed often with Pereira as he organized indigenous patrols of the local reservation. read more

Police have arrested one fisherman, Amarildo da Costa, known as “Pelado,” on a weapons charge and are keeping him in custody as they investigate whether he is involved in the men’s disappearance.

Costa’s lawyers and family have said he fished legally on the river and denied he had any role in the men’s disappearance.

Some 150 soldiers had been deployed via riverboats to hunt for the missing men and interview locals, joining indigenous search teams who have been looking for the pair for a week.