The latest challenge to Joe Biden’s presidency: the Omicron variant

Analysis: after he promised to crush the coronavirus, the rise of a new strain could be a blow to perceptions of his competency

David Smith in Washington
The Hill

Joe Biden looked out at an audience of government scientists last week and recognized a mask-wearing Anthony Fauci, his top adviser on the coronavirus. “I’ve seen more of Dr Fauci than my wife,” he joked. “Who’s president? Fauci!”

The US president was visiting the frontline of the Covid-19 struggle, the National Institutes of Health in Bethesda, Maryland, where he unveiled a winter plan that includes a drive for vaccine boosters, free at-home testing and fresh requirements for international travelers.

But even as Biden preached to the converted on Thursday, he faced a new political threat. The Omicron variant was spreading rapidly from state to state, trailing uncertainty in its wake. “We’re going to fight this variant with science and speed, not chaos and confusion,” he promised, “just like we beat back Covid-19 in the spring and more powerful Delta variant in the summer and fall.”

Yet the Delta variant itself is far from beaten, underlining the perils of what may prove the defining issue of Biden’s presidency and the measure of its success or failure. He came into office promising to crush the coronavirus but, after at least one false dawn, that goal remains frustratingly elusive – and now Omicron could deliver another hammer blow.

Indeed, Biden’s aura of competence took a hit over the summer, partly because of the chaotic withdrawal from Afghanistan, partly because the Delta variant appeared to catch him by surprise. Its persistence has made a mockery of his July declaration that Americans could soon declare independence from the virus.

Laurie Garrett, an award-winning science writer, said: “I don’t think that anybody in the spring in the United States was operating with the correct level of alarm about the Delta variant.

“I would forgive many leaders for having an inability to read the situation adequately and recognise how dangerous it was but, once it was clear that the Delta variant was far more contagious, everybody should have gone into high gear and I do think there was a slowness in response.”

Biden’s swift travel bans on southern African countries in response to Omicron suggested a resolve to learn lessons from Delta; to some it looked like overcorrection. But the challenge this time is compounded by new extremes in the Republican party and rightwing media’s politicization of the pandemic.

On Thursday, the president acknowledged: “It’s become a political issue, which is a sad, sad commentary. It shouldn’t be, but it has been.”

His stated hope that the nation could now come together around his new plan will have struck some as optimistic to the point of naivety. Democrats accuse Biden’s opponents of weaponizing the virus and its variants against him with the long-term objective of denying him a second term.

Eric Schultz, a communications strategist who worked in the Obama administration, told the Associated Press: “It’s clear that Republicans have decided that the fate of the Biden presidency is tied to Covid. And Republicans have chosen to be on the side of the virus.”

Some Republicans have all but entrenched an anti-vaccination culture. Senators this week briefly threatened a government shutdown over mandates. Florida, Iowa, Kansas and Tennessee have extended benefits to workers who are fired or resigned over their employers’ vaccine requirements.

Leslie Dach, chair of Protect Our Care, a healthcare pressure group, said: “They’re literally sacrificing the lives of their own voters on the altar of their personal politics. That’s just incontrovertibly true when you know that the death rate is 15 times higher and you see who is choosing not to be vaccinated in America. They’re basically meting out a death sentence for people.”

It seems to be getting worse. A day after news broke about the Omicron variant, Ronny Jackson, a Republican congressman from Texas and former doctor to Donald Trump, floated a groundless conspiracy theory. He tweeted: “Here comes the MEV – the Midterm Election Variant. They NEED a reason to push unsolicited nationwide mail-in ballots. Democrats will do anything to CHEAT during an election – but we’re not going to let them!”

Meanwhile, Lara Logan, a Fox News personality , compared Fauci to the Nazi doctor Josef Mengele, known as the Angel of Death for the experiments he carried out on prisoners at the Auschwitz death camp. Michael Bornstein, a survivor of Auschwitz, described the comments as “disgusting”.

But Logan was not sanctioned by Fox News and, with Holocaust comparisons proliferating on rightwing social media, including even in merchandise, there are fears that America’s hyperpartisan atmosphere may have passed a point of no return, paralysing its Omicron response.

Garrett, author of The Coming Plague: Newly Emerging Diseases in a World Out of Balance, warned: “There is no possibility of working together. If you were going to write a scenario that was perfect for a virus to spread rampantly, having the humans at the edge of civil war every five minutes would be a perfect scenario.”

Despite these forces, the White House points to dramatic progress over the past year. Last Christmas less than 1% of adults were fully vaccinated; this Christmas that share will be 72%, including more than 86% of elderly people. More than 20 million children have been vaccinated – though under-fives still await approval – and 99% of schools are open.

But the pandemic has proved a tenacious foe with renewed surges in Michigan and other midwestern states threatening to overwhelm hospitals. About 40 million adults refuse to get vaccinated. Take-up of boosters – more essential than ever due to Omicron – has been sluggish: more than 100 million eligible people have not yet received the shot. Masks, empty offices and unpredictability persist.

The conflicting picture has left the president to juggle duelling messages, one encouraging a return to life as normal, the other urging continued precautions. There seems little prospect of a definitive ending or declaration of victory. Roughly 47% of Americans approve of Biden’s handling of the pandemic while 49% disapprove, according to a recent Washington Post/ABC News poll.

Michael Steele, former chairman of the RNC, said he would award the president about five marks out of 10 so far. “Given the success they had early on in getting the vaccine programme put in place, shots in arms and all that, when the [Delta] variant hit it caught them flat-footed and took them by surprise.

“The administration lost a lot of the gains it had made coming in the door because it shattered people’s confidence in their ability to not only handle what was going on but to actually know what was going on.”

Steele, a longtime critic of Trump, noted that calculated attacks and obstruction from the right present a further obstacle to the nation’s recovery from the pandemic. “Biden doesn’t want to further politicize Covid and yet you have Republicans and that’s all they know how to do.”

The situation, he added, is reminiscent of Barack Obama’s signature healthcare law, the Affordable Care Act, which Republicans spent years trying to repeal without offering a replacement.

Bill Galston, a senior fellow at former policy adviser to Bill Clinton, awards Biden a more generous eight of out of 10 for his coronavirus approach to date. “The reason that’s two clicks short of 10 is that I think the White House really went astray in early July when it did everything but hang a mission accomplished banner over the subject.

“As I recall, the president announced a summer of freedom. One of the things they have surely learned is that they’re at the mercy of events that they can neither foresee nor control in advance and so creating hopes that are then extinguished by events is really counterproductive.”

More than 780,000 Americans have now died from Covid-19. This week, at a White House press briefing, the Fox News reporter Peter Doocy asked: “Whatever happened to President Biden’s promise to shut down the virus?”

The press secretary, Jen Psaki, replied: “We’re working on it.” 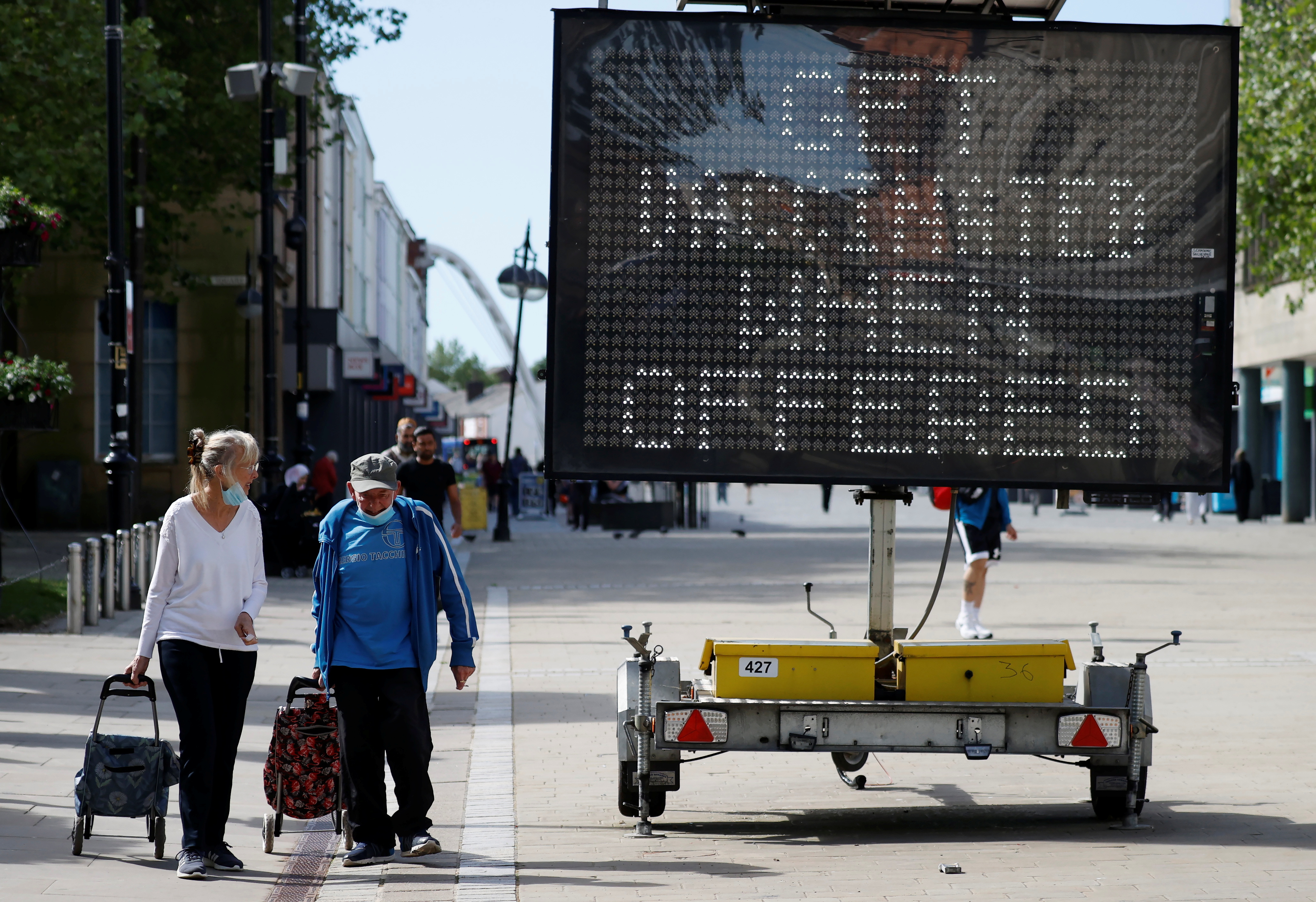 People pull shopping carts as they walk past an information board, amid the outbreak of the coronavirus disease (COVID-19), in Bolton, Britain, June 16, 2021. REUTERS/Phil Noble

Dec 6 (Reuters) – Here’s what you need to know about the coronavirus right now:

Voter support for Japanese Prime Minister Fumio Kishida ticked up after his government enforced tighter border controls against the Omicron variant of coronavirus, the Yomiuri Shimbun daily said on Monday. Japan took some of the world’s strictest steps on Nov. 29 by closing its borders to new foreign entrants for about a month. A day later, it discovered its first Omicron infection in a Namibian diplomat who had arrived on Nov. 28.

Support for Kishida’s government was 62%, up from 56% a month ago, the Yomiuri poll showed, with 89% of respondents taking a positive view of the measures. read more

The Omicron variant of the coronavirus has spread to about one-third of U.S. states, but the Delta version remains the majority of COVID-19 infections as cases rise nationwide, U.S. health officials said on Sunday. Dr Anthony Fauci, the top U.S. infectious disease official and U.S. President Joe Biden’s chief medical adviser, said he hoped the United States would lift its ban on travelers from southern African countries in a “reasonable period of time.”

Many of the cases were among fully vaccinated individuals with mild symptoms, although the booster shot status of some patients was not reported. Governors of two states with reported Omicron cases – Connecticut and Colorado – said they hoped their higher-than-average vaccination rates would blunt the impact. “We want to see how well the vaccinations hold up,” Colorado’s Jared Polis told ABC. read more

Canada’s tight labor market is forcing many companies to offer regular COVID-19 testing over vaccine mandates, while others are reversing previously announced inoculation requirements even as Omicron variant cases rise.

There are pitfalls to employing the unvaccinated. Companies run a higher risk of COVID-19 outbreaks and many vaccinated employees are uncomfortable working with those who have not had the shot, said industry groups and marketing experts. In the hard-hit manufacturing sector, where 77% of firms say their top concern is attracting and retaining workers, vaccine mandates are more rare. read more

Non-severe COVID-19 during pregnancy has no visible effect on the baby’s brain, according to a small study presented on Tuesday at the annual meeting of the Radiological Society of North America. Researchers led by Dr Sophia Stoecklein of Ludwig Maximilian University in Munich used fetal MRI to study 33 pregnant women with mild or moderate COVID-19. The MRI scans showed “normal age-appropriate brain development” in all cases, Stoecklein said in a statement. “There were no findings indicative of infection of the fetal brain.”

Only mothers who did not require hospital admission were included in the study. “Since the impact of severe infection on brain development in the fetus has not been conclusively determined, active protection against SARS-CoV-2 infection during pregnancy remains important,” Stoecklein said. read more

The court found the former director of the state hospital in Salt, a city west of the capital, and four of his senior aides responsible for the deaths, media said. The patients, who were being treated in the hospital, died in March when staff failed to act after oxygen ran out in a COVID-19 ward for nearly an hour. read more