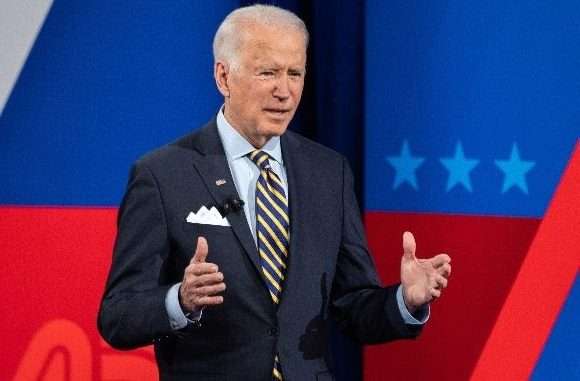 President Biden on Tuesday said Americans might return by early next year to the routines and lives they remember before COVID-19, but he conceded less than a month into his presidency that “we don’t know.”

Speaking for the first time as president during a town hall event hosted by CNN in Milwaukee, Wis., Biden said he would like to see schools reopen for in-person instruction by summer, urged Americans to do everything possible to get vaccinated against COVID-19 and said he empathizes with public confusion and fear about everything from byzantine online vaccine appointment systems to shifting scientific predictions about the impact of coronavirus mutations (The Hill).

“If you’re eligible and it’s available, get the vaccine,” he said, adding “thus far there is no evidence” that the Pfizer and Moderna vaccines don’t offer protection against new strains of COVID-19 first identified in the United Kingdom, South Africa and Brazil.

Apologizing that his answers were lengthy and at times meandering, Biden digressed with quotes he attributed to his parents, Abraham Lincoln, Franklin Roosevelt and Martin Luther King Jr. while reviving his campaign themes of honest talk, decency in governance and fact-based solutions to intractable problems.

COVID-19 is at the top of his list. “Look what we inherited,” he said about the Trump administration’s approach to the pandemic response. “We wasted so much time.”

Biden told CNN’s Anderson Cooper and audience members who asked questions that he has not retreated from his plan to enact $1.9 trillion in coronavirus relief legislation and he voiced unwavering support for a $15 per hour federal minimum wage, a benchmark goal among progressives. Biden also said he “guaranteed” mom and pop small businesses that federal loan money included in his plan would benefit them rather than the large companies that qualified for Paycheck Protection Program funds last year.

During the 75-minute discussion, Biden tried without complete success to avoid mentioning former President Trump, calling him at one point “the former guy.” The president said it was time to talk about the American people and not his predecessor.

“For four years, all that’s been in the news is Trump. The next four years, I want to make sure all the news is the American people. I’m tired of talking about Trump,” Biden said when asked about Trump’s weekend impeachment acquittal (The Hill).

Asked about other pending legislation, Biden dove into the tricky waters of immigration, hinting that he would embrace a piecemeal approach to reform. He told Cooper that he would sign a bill even if a pathway to citizenship for undocumented workers is not included, but added that the provision remains a priority for his administration.

On the world stage, Biden said the United States “must speak up on human rights” and declared that there will “be repercussions for China” regarding human rights abuses. The president said he raised human rights during his recent two-hour phone conversation with Chinese President Xi Jinping. However, Biden also noted the complexity of the issue, saying that, “I shouldn’t try to talk China policy in 10 minutes on television.”

Tuesday’s Wisconsin event took place in a community concerned about the Jacob Blake police shooting last year, prompting questions about how police departments — especially within minority communities — can be reformed. Biden said the answer is not to defund the police, but rather to improve police departments and to improve judicial sentencing.

Biden also waded into the issue of student debt, reiterating his support to forgive up to $10,000 in repayments. When pressed by one woman who insisted that the forgiveness level needs to rise to $50,000, Biden flatly told her, “I will not make that happen,” pointing to his inability to do that via executive action. The $50,000 figure is one frequently floated by Sens. Bernie Sanders (I-Vt.) and Elizabeth Warren (D-Mass.) (The Hill).

Biden was candid before flying back to the White House from a city that helped him defeat Trump in November that living his life as president is a lot different than he expected. He described the White House as “like a gilded cage” staffed by attentive residence professionals who are present at every turn, which he said takes some getting used to. He surprised Cooper by saying he’d never been in the private quarters of the White House during his career as a senator and vice president.

Biden added that he’s been president for just weeks, “but sometimes it feels like four years because there’s so much happening.”

“It’s the greatest honor an American can be given, from my perspective,” the president continued. “I literally pray that I have the capacity to do for the country what you all deserve should be done.”