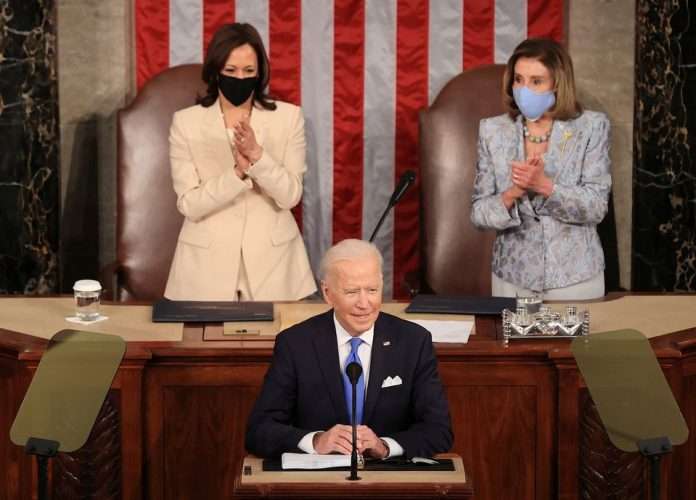 US President Joe Biden has made the case for sweeping government action in an address to a sparsely populated joint session of Congress like no other in U.S. history thanks to the pandemic .

Speaking on the 99th day of his presidency in a chamber overrun by insurrectionists just more than three months ago, Biden laid out an ambitious legislative agenda before an audience of lawmakers severely limited by the coronavirus pandemic.

Biden used his address to tout his efforts to get the nation back to normal after the pandemic and the divisive presidency of Donald Trump. He made no direct mention of his predecessor, but argued those present had a responsibility to “prove democracy still works and our government still works and we can deliver for our people.

“We have stared into an abyss of insurrection and autocracy — of pandemic and pain — and ‘We the People’ did not flinch,” Biden said. “At the very moment our adversaries were certain we would pull apart and fail. We came together.”

In a historic first, two women were seated directly behind Biden on the dais: Speaker Nancy Pelosi (D-Calif.) and Vice President Harris.

The president fist-bumped masked lawmakers as he entered the chamber, including Rep. Liz Cheney (Wyo.), the third-ranking House Republican, who voted to impeach former President Trump for inciting the Jan. 6 mob.

He outlined what he said were the successes of a nationwide vaccination effort and a $1.9 trillion economic relief package signed into law in March.

And he touted new legislative proposals to invest a total of $4 trillion to build climate-friendly infrastructure such as roadways and broadband as well as child care and family leave programs.

Biden said it was time to acknowledge that the trickle-down economics of the Reagan era had failed, proposing major tax hikes on corporations, investment income and wealthy households.

“We have to do more than just build back. We have to build back better,” Biden said. “We have to compete more strenuously than we have.”

“Throughout our history, public investments and infrastructure have literally transformed America. These are investments we made together, as one country, and investments that only the government was in a position to make. Time again, they propel us into the future,” he added.

The president, who campaigned as a moderate who could win over Republicans and ease partisan tensions, extended an olive branch multiple times in his remarks by welcoming GOP proposals and negotiation on his ideas. But he made clear inaction was unacceptable, framing it as a matter of restoring confidence in government.

He also described his proposals as those that have historically had bipartisan support, reflecting the White House’s efforts to redefine the notion of bipartisanship.

There were a few moments of bipartisan applause during the speech, such as when Biden vowed to confront China and promoted his “Buy American” initiative. The president chatted with lawmakers on his way out of the chamber, including Sen. Rob Portman (R-Ohio), who is among the Republican senators who offered a counterproposal to Biden’s infrastructure plan.

In contrast, Sen. Ted Cruz (R-Texas) was seen on camera appearing to doze off during the address.

Biden sought to frame the gridlock that has come to define Washington, D.C., as a looming threat to the country’s democracy. He boasted that the early actions of his administration have shown how the government can work for the public but cautioned that lingering apathy from lawmakers would have lasting consequences.

“In another era when our democracy was tested, Franklin Roosevelt reminded us — in America, we do our part. That’s all I’m asking, that we all do our part,” Biden said.

He urged Congress to pass immigration reform, even if by piecemeal, to protect Dreamers and secure the border, and renewed a push for a ban on assault weapons and expanded background checks. He called on lawmakers from both parties to “find consensus” and pass policing reform by the anniversary of George Floyd’s death next month. And he urged the Senate to pass the Equality Act, which would expand protections for members of the LGBTQ community.

Biden called on Congress to pass a $15 minimum wage, a progressive priority that has run into opposition among even some Democrats in the Senate. And he pushed for action on lowering drug prices and expanding Medicare benefits, two elements for which Democrats advocated that were left out of his families plan when it was unveiled by the White House in advance of the speech.

The laundry list of priorities won applause from moderate and progressive Democrats alike. But with slim Democratic majorities in the House and Senate, each of those legislative efforts face an uphill battle and will require the support of at least some Republican senators.

“I was not overly inspired,” said Sen. Lisa Murkowski (R-Alaska), a moderate Republican who has backed some Biden nominees. “I think he wanted to make sure we knew all of the ins and outs of his various plans. I was looking for more of an uplifting and outreach on the bipartisan note that we heard from the inauguration speech.”

Another one of those senators, Tim Scott (R-S.C.), delivered the GOP rebuttal to Biden’s speech. He panned Biden’s agenda and argued that the government spending and tax hikes would weaken the economy, accusing Democrats of divisive action by passing a “partisan” coronavirus relief bill.

“The actions of the president and his party are pulling us further and further apart,” Scott said.

The Hill- President Biden outlined his American Families Plan, an ambitious package that would call for $1 trillion in new spending and $800 billion in new tax credits and aim to significantly expand access to preschool and community college, as well as child care and health care benefits.

Biden will detail the proposal during a speech before a joint session of Congress in which he is expected to lay out his agenda for the coming months. The centerpiece of the speech will be the families plan, which is being rolled out less than a month after Biden unveiled a $2.3 trillion infrastructure proposal.

The American Families Plan calls for a $200 billion program offering universal pre-kindergarten for all three- and four-year-olds; $109 billion for tuition-free community college for any American who wants it; $85 billion to increase Pell Grants to benefit low-income and minority students; and more than $4 billion in funding for larger scholarships, certification and support programs for teachers.

The plan would build upon provisions of the American Rescue Plan by extending the Affordable Care Act premiums tax credits indefinitely and make the earned income tax credit expansion for childless workers permanent. It would permanently make the child tax credit fully available to the lowest-income families, while extending other aspects of the expansion of the credit, such as the increase in the credit amount, through 2025.

The proposal also calls for the creation of a national paid family and medical leave program. The $225 billion investment would provide workers up to $4,000 a month if they require leave to care for a new child, care for a seriously ill loved one, deal with an illness or another serious reason.

Other measures Biden will call on Congress to pass include a $45 billion investment in meal programs for children and low-income families; unemployment insurance reform; $225 billion for investments in child care that would include a $15 minimum wage for early childhood staff and expanded child care center accessibility.

Officials said the plan would be paid for through tax reforms targeted at wealthy Americans, such as an increased capital gains tax rate, a higher top income tax rate and increased IRS auditing enforcement on high-income individuals and businesses.

“We view the American Families Plan as a core element of President Biden’s strategy to build back better and generate a strong and inclusive economy for the future,” a senior administration official said.

The plan, which faces an uncertain future in Congress, does not go as far as some Democrats hoped. Some have pressed for a permanent expansion of the child tax credit, and it’s not clear that lawmakers will be satisfied by the proposal to make part of the expansion permanent while extending other parts through 2025. Key Democrats signaled on Tuesday that the House bill would include such a provision despite Biden not putting it in his initial proposal.

Biden has also faced pressure from members of his party, including House Speaker Nancy Pelosi (D-Calif.), to include health-related provisions expanding health coverage and lowering drug prices. The ideas had initially been expected to be part of the plan, but Biden did not include them in the final version.

Asked why such provisions were not included, a senior administration official said that the permanent ObamaCare premium tax credit represents a “critical investment” and insisted that Biden remains “fully committed to negotiations to reduce the cost of prescription drugs.

The White House views the proposal as a companion to Biden’s $2.3 trillion infrastructure and climate plan he announced last month, and officials said that the investments would be made over a 10-year period.

The two plans combined total more than $4 trillion in government spending, on top of the $1.9 trillion coronavirus relief bill that Biden signed into law about 50 days into his term. The administration’s two most recent proposals include tax increases that would pay for both plans in full over a 15-year period.

Biden’s proposed jobs plan would be paid for through an increase in the corporate tax rate, while Wednesday’s proposal would roll back the 2017 Trump tax cuts by increasing the top individual tax rate from 37 percent to 39.6 percent for taxpayers in the top 1 percent of income. Biden is also proposing an increase in the capital gains tax rate for households making more than $1 million to 39.6 percent, which officials have said would only impact 0.3 percent of taxpayers.

Senior administration officials made clear the proposal is meant at a starting point and that Biden is open to hearing suggestions on what should be included and how to pay for the package. But Republicans are likely to oppose Biden’s family plan and the tax hikes proposed to pay for it, and some moderate Democrats could also oppose the plan because of its large price tag and tax provisions.

“What you’ll hear the president explain tomorrow night is if people have other ideas about how to finance these critical investments, he is open to hearing them,” said one official. “But he believes that these issues of tax fairness, of making sure people pay the taxes they already owe, are fundamental and necessary.”

Biden and other top administration officials are set to embark on a publicity blitz after Wednesday’s speech to educate the public about both the infrastructure proposal and the families plan and win over support for both measures.

The White House will face a complicated road to getting both proposals passed, even as officials have said publicly they hope to see some kind of progress on an infrastructure bill by Memorial Day and passage by summer. The White House has not ruled out using budget reconciliation to pass Biden’s proposals without GOP support, which Democrats resorted to in order to pass his coronavirus relief bill.

Some White House allies, such as Sen. Chris Coons (D-Del.), have suggested working with Republicans to pass a bipartisan bill that addresses traditional infrastructure like roads, bridges, railways and broadband, while using the budget reconciliation process to pass other priorities in a way that would not require GOP support.

Biden will maintain an “openness to others’ ideas,” a senior official told reporters, but is committed that “these are investments we can’t afford not to make as a country.” 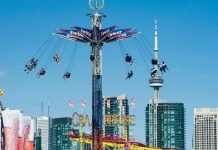