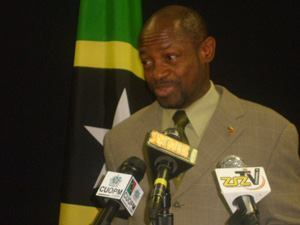 Red flags are being raised regarding the government’s latest privatisation deal and land initiative which when combined, could gross close to 300 million dollars.

Government also launched a new land initiative in August which stipulated that persons successful in being allotted land had six months to pay for the land in its entirety.

Based on these figures, the government stands to make at minimum, EC$100 million and if all 5000 lots are sold at maximum size, a whopping $262.5 million.

Douglas has also announced plans to liquidate government assets including equity interest in The Cable, the quarry operations, CEMACO, Development Bank and the electricity service.

“…it was made clear that the government intended to move forward with the privatisation process as an important element of its development strategy. In this regard, the government with the assistance of the Caribbean Development Bank has already engaged Consultants in respect of the commercialisation of the Electricity Service. In respect of CEMACO, we have invited competitive bids for the purchase of this enterprise and we expect that shortly we will be in a position to make an appropriate announcement in respect of the privatization of CEMACO,” Douglas stated.

With respect to the privatisation of The Cable, Douglas said that they were already in negotiations with the largest minority shareholder to privatise the government’s interest in the enterprise.

Political watchdogs are commenting on the seemingly mad rush to liquidate federal assets and have raised more than an eyebrow as to what the funds are earmarked for. There is also concern about the economic fallout from privatisation that will no occur as privatisation of utility companies is always coupled with a rise in the cost of said utilities.