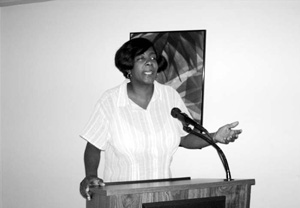 The Government of Saint Kitts and Nevis became party to the Cartagena Protocol on Biosafety on July 15, 2005. The protocol, an international environmental agreement regulating the trade of Genetically Modified Organisms (GMOs) also known as  Living Modified Organisms (LMOs) was reviewed on Monday April 30, 2007 at the Mount Nevis Hotel where local and foreign bodies were represented.

The Protocol seeks to protect biological diversity from the potential risks posed by LMOs resulting from modern biotechnology.

It aslso addresses the transfer of LMOs from one country to another through an Advance Informed Agreement (AIA) procedure for ensuring that countries are provided with the information necessary so as to make informed decisions before agreeing to the import of such organisms into their territories and establishes an alternative procedure for LMO commodities intended for direct use as food or feed, or for processing.

He stated that in an order to maintain a standard mechanism for public participation and education, the public must be educated about products of modern biotechnology on an ongoing basis as well as the requirement for the involvement of the public in the decision making process.

He mentioned that a proper administrative system should be put in place- where day to day operation of the regime and international reporting obligations is implemented. The regulatory and decision making system is also to be put under consideration

He said only 10 countries have completed the final of the National Biosafety Framework so far and that the remaining will be due by September 2007 while the NBF development project ends in December 2007.

He also disclosed the reasons for the establishment of the National Biosafety Framework and they include the ability to set trade of modern biotechnological products in legal and policy framework that promotes sustainable development.

He continued: “ The ability to comply with the biosafety protocol, to produce an enabling environment for the development of biotechnology to enhance economic development, to integrate biotechnology related to modern technology with areas such as food safety, health, environment, invasive species and consumer rights and protection are parts of the reasons for the establishment of NBF.”

He said in all countries, NBFs are seen at the higlest level by a body often referred to as a National Biosafety Committee, Biosafety Authority or Biosafety Council comprising mainly of representatives from government agencies.

He later mentioned the challenges being faced by the NBFs which include the overall low capacity and financial incapability.

However, he suggested some solutions to these problems. He mentioned that in addressing overall low capacity, regional project should be established to assist countries with the implementation and operation of their NBFs and disclosed that UNEP/GEF Biosafety unit has mandate to promote capacity building assistance to countries to enable them to give effect to the biosafety protocol  through implementation  of their National Biosafety Frameworks.

He furthered with the suggestion that establishement of the GEF as a funding mechanism for the implementation of the biosafety protocol could be effective in overcoming the financial constraints.

He added that under the current funding procedures of the GEF, countries can receive money for national activities for biodiversity including biosafety. He later mentioned that additional funding from outside of the GEF becomes available for a regional biosafety project.

In his conclusion, he explained the implications of a weak biosafety regime. “The potential threats posed by genetically modified organisms to biodiversity, sustainable livelihoods and human health are not significantly lowered if at all” he said.

The Deputy Director of Legislative Drafting in the Legislative Drafting Department in the Attorney General’s Chambers in St. Lucia, Mrs. Vidal-Jules who drafted the National Biosafety Framework Act reviewed the draft while she welcomed suggestions and comments by host of attendees.

She mentioned that the third part of the Act has its section dealing with the Staff of the board,  functions and powers. Here, its is discussed how to deal with appointment of inspectors, analyst, engagement of consultants, duties and powers of inspectors and functions of analyst.

She concluded that the sixth part attends to the restriction, application, inspection, consideration, , cancellation, publication and grant of licensing of premises to be used for contained use while the seventh part  makes general provision for socio-economic considerations, modification of articles, offences by corporations, time limit on prosecution, evidence, disposal of seized articles, risk management, and review of decision and regulations. After suggestions and comments, in few weeks time, the reviewed draft is expected to be forwarded to members for the purpose of approval.