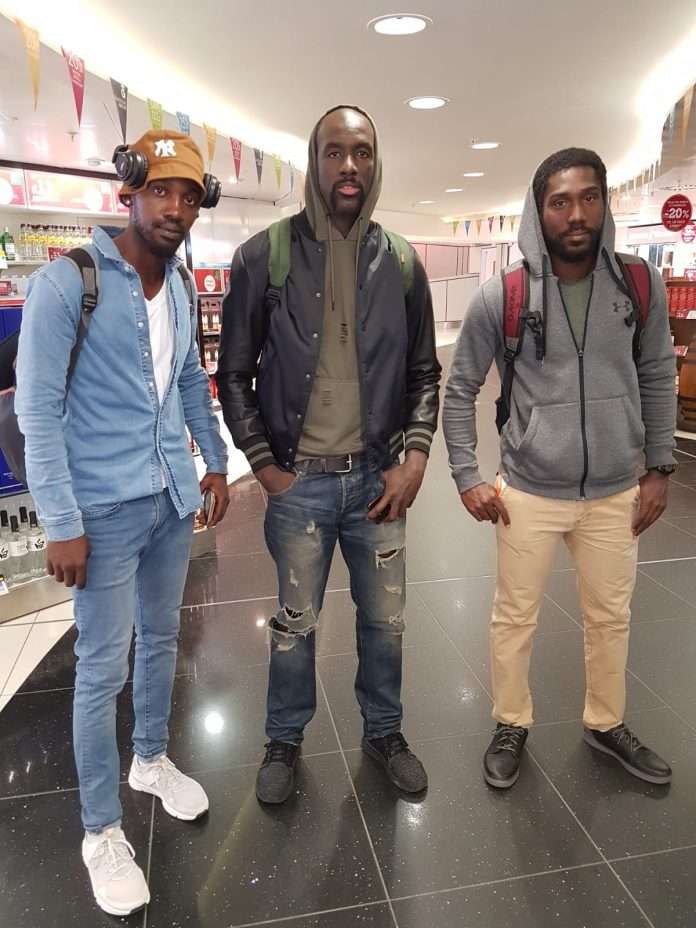 Three cricketers from St Kitts are featured in a Bollywood movie dubbed ‘83’ that was released on December 24, and have recounted their experience working on the film.

‘83’ is a 2021 Indian sports drama film directed by Kabir Khan and produced by Deepika Padukone, based on the India national cricket team led by Kapil Dev, which won the 1983 Cricket World Cup.

Speaking exclusively with The Observer, they all explained their thoughts on the final outcome.

Taylor said he was still “blown away by it” and “lost for words”.

“To be honest, I can’t explain the feeling, it has not hit me yet.”

Nurse said he has already seen it three times now.

Berridge said it was “an amazing feeling”, but can’t even explain how he feels, because “it is a shock seeing yourself on such a big screen. The production of it is really nice”.

They also disclosed how they received the opportunity, with Berridge and Taylor meeting with a casting agent who came to St Kitts in 2018, and they auditioned for roles. Nurse, who resides in England, said he got in Nottinghamshire, and had to go through “vigorous testing, some interviews and some net sessions”.

Of the three, Nurse was the only one who said he had any acting experience, having had parts in short films as well as doing modelling.

“Living out there, I model, so the transition was probably the right transition. I have done some short films and stuff like that before, but this is my first movie premiere and first big production.”

Addressing the intricacies of acting out cricket, they all admitted having challenges playing their individual roles.

Taylor said the most difficult part was “copying someone’s batting style, and actually getting it down packed; the shots I needed to play for the scenes”.

“The hardest shot I had to play was hitting across the line. It took some time to get adjusted to it… I did not have to focus on mannerisms as much, because I am somewhat similar to Viv in demeanour, so that was very natural.”

Berridge said the cricket section was easy, but copying Roberts’ style and attitude was difficult.

“I had to do some research, that was the difficult part… playing the role the way he used to do.”

Nurse indicated that his natural demeanour was the opposite of Lloyd, so there was an adjustment that was needed.

“For me, I am a very loud character…whereas Clive Lloyd was more subdued. He was more that leader who stands and looks and works out everything. We both bat left-handed and our stances were different. He had a much straighter stance, and my stance was bent at the knees, so I had to change my whole batting stance. Certain shots that I play, he played differently, so I had to train to make sure the shot that he played was exactly like it. Everything was done to the finer details, there was no stone left unturned.”

The trio also revealed they were lucky to meet the legends they portrayed during the movies.

Nurse said he met Lloyd when he came on set one day.

“We sat down, had lunch together, and I was able to get into his soul per se. I have watched and have heard, and then got the opportunity to absorb, and it gave me the confidence that what he had seen so far looked like him.”

Taylor noted that he met Viv Richards at an event “and I spent 30 minutes talking with him and taking a few pictures”.

“Being around him, he is a very intense character.”

Berridge said he met Andy Roberts in Antigua after filming the movie, and had a little discussion about the movie.

“He was happy when I told him I am the guy that acted as him, and he started laughing, because he said I did not look like him. I actually showed him the picture, and he said he could now see it.”

Speaking to resemblance to the cricketers, the trio at first saw none of it in their characters, but saw it during the filming.

Nurse said his cricketing style was similar, but in terms of looks he could not see it.

“When I was playing cricket my friends would call me ‘Lloydie’ for certain things I used to do. When the production was put together, in terms of putting on a wig and glasses, I was like ‘is this guy my father?’”

Berridge added that he did not think he looked like Roberts, but the make-up team “did a hell of a task to get me to look like him; they did a brilliant job”.

Taylor, on the other hand, said he found it hard to see himself as Sir Viv, but when he got the opportunity to look at his younger pictures, he started to see the resemblance. He said people in England even asked if they were related.

Working with the Indian movie stars, they said they were “very chill, down to earth characters”.

Berridge said, “They enjoyed being around us more than we expected. They left their huts and built a vibe with us. They liked our culture and the way we dance and so on. They enjoyed the dominoes; they never knew how to play but we showed them and they enjoyed it.”

Nurse said working with them gave him “friends for life”.

“I could pick up my phone and call these stars, that is how close we are.”

They also recounted what a normal filming day was like for them, noting that they would leave the hotel at 5:30 in the morning and get back at 11 at night, and do it all over again for two weeks when they were trying to film the World Cup scenes together.

“Hot sun, sweaters, wigs, that was the toughest part to the film,” Nurse said.

They noted their entire filming was about three months, while the film took about one year to complete.

Last Sunday there was a local showing of the movie that was quickly sold out, with members of the Indian community taking the opportunity to see it.

“A lot of locals did not get to see it, because they did not get the opportunity to… the Indians here bought all the tickets. They were never going to miss that. We are trying to see what we can do to get the public to get to see it,” Nurse said.

Berridge said the public response to them being featured in the film has gone down well.

Taylor said, “I have been getting good feedback. A lot of people have been saying they are proud of me, especially coming from my community it is pleasing.

Berridge said he feels people do not understand how big it is, “but there are those who can’t wait to see this movie. I hope locals can get an opportunity”.

Speaking to more acting gigs, the trio said they were open to take advantage of any opportunity.