Bank of Nevis International Ltd. (BONI) was among the major sponsors of the prestigious Powerlist Black Excellence Awards 2023 that was held on 28th October at the Savoy Hotel in London.

Powerlist is the annual ranking of the UK’s most powerful people of African, African Caribbean and African American heritage.

The Powerlist was launched in 2007 to showcase black role models to young people. It is now regarded as the leading authority on issues of black influence. Now in its 15th year, The Powerlist honours incredible men and women across a wide range of industries including business, science, technology and the arts.

“Powerlist has set out to inspire future generations by celebrating the most talented people of African, African Caribbean, and African American heritage in the UK. Showcasing role models is essential to ensuring diversity at all levels of organisations not matter the field,” said Sonia Bowen-Tuckett, BONI’s Senior VP Banking.

“BONI is proud of our diverse and inclusive team supporting global clients from all parts of the world. By empowering young people from all backgrounds, businesses can ensure they reflect the world we live in, and only by doing so can they deliver the best product and most creative solutions.”

At the Awards ceremony, Dame Sharon White, chair of the retail giant John Lewis, was named the UK’s most influential black person. Other well-known names on the list include Stormzy and Idris Elba.

BONI’s sponsorship of the Powerlist follows a series of other recent sponsorships in St. Kitts & Nevis and around the world, including, but not limited to:

• The UK’s AMOS Bursary, which works to ensure talented young people of African and Caribbean descent in the UK have the opportunity to excel in the highest levels of education.

• 2022 Nevis Mango Festival, a three-day event that attracted culinary stars from Nevis and beyond to showcase the 44 varieties of mango found on the island.

• The Aquatic Recreation Centre’s summer camp by funding a visit to the Mount Travers Hike. The five-day camp trip is designed to help young Nevisians aged 3-11 “embrace some of our culture” while raising awareness of the value of our natural world.

• The national inter-school cricket tournament hosted by the Nevis Sixth Form College to inspire pupils to lead healthy lifestyles and create change for themselves and their community through sport and physical activity.

• Music & A Message event hosted by the Ministry of Health and Gender Affairs to inspire the young people of Nevis to broaden their horizons and develop wider skills through enriching creative activities. 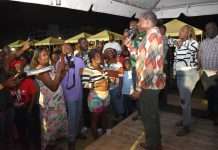 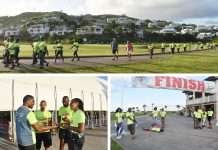