Protests have taken place across Brazil over the management of the Covid-19 crisis by the government of President Jair Bolsonaro.

In the capital, Brasilia, thousands gathered in front of Congress calling for the president’s impeachment, and demanding more vaccines.

Mr Bolsonaro’s popularity has plummeted over his response to the pandemic.

Brazil has registered nearly 460,000 deaths – the second-highest toll in the world after the US. It also has the third-highest number of coronavirus cases at more than 16 million.

Saturday’s protests piled further pressure on Mr Bolsonaro as Brazil’s Senate holds an inquiry into his government’s handling of the pandemic and the slow roll-out of the vaccine programme.

The high number of cases has brought the country’s health system to the verge of collapse.

The far-right leader has consistently opposed lockdown measures, arguing that the damage to the economy would be worse than the effects of the coronavirus itself. He has also told Brazilians to “stop whining” about the situation.

In Brasilia, protesters marched alongside a giant plastic doll of the president. Placards demanded his impeachment and called for more vaccines and emergency financial aid. There were also calls to better protect indigenous people and to stop deforestation of the Amazon.

In Recife, police fired rubber bullets and tear gas at protesters who tried to march down a closed road, local media reported.

In some cities, demonstrators laid thousands of symbolic crosses in tribute to those who died in the pandemic.

On Thursday, the head of Brazil’s prestigious Butantan Institute told a Senate committee that President Bolsonaro’s actions delayed the start of the vaccination programme, the Spanish news agency Efe reports.

Dr Dimas Covas said that in August last year, Butantan offered to supply the government with 100 million doses of the CoronaVac vaccine, which the institute manufactures under licence from China’s Sinovac. He said the proposal included a pledge to deliver the first five million doses by the beginning of December.

But a day after Butantan’s offer, Mr Bolsonaro vowed that his government would “never” buy a Chinese vaccine, Dr Covas said.

“We could have been the first country in the world to vaccinate,” he told the committee.

Had the offer been accepted, Butantan would have been able to deliver 100 million doses by 30 March this year, Dr Covas added.

Instead, Brazil has so far received a total of 46 million doses, due in part to shortages of raw materials amid the global scramble to obtain vaccines. Only 10% of the adult population has received the two required doses.

Earlier in the inquiry, Pfizer’s top executive for Latin America, Carlos Murillo, told the Senate committee that Mr Bolsonaro’s government never responded to an offer that would have seen 1.5 million doses of the US pharmaceutical giant’s vaccine reach Brazil last  December. 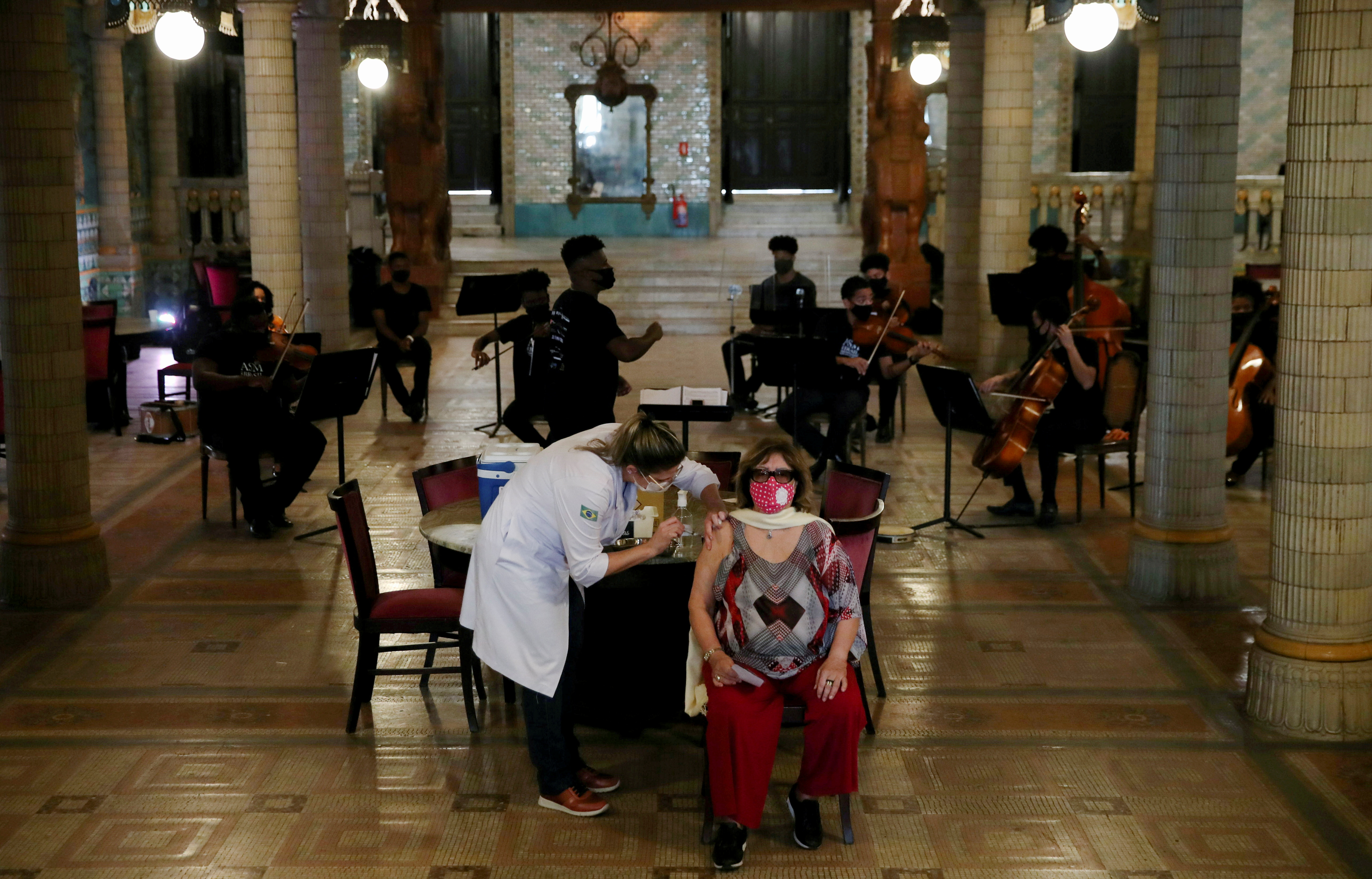 A health worker applies an AstraZeneca coronavirus disease (COVID-19) vaccine to a citizen during a vaccination day at the Municipal Theater in Rio de Janeiro, Brazil, May 27, 2021. REUTERS/Ricardo Moraes

Serrana, a city in southeastern Brazilian state of Sao Paulo, has seen a 95% drop in COVID-19 deaths after it concluded vaccination of almost all adults, TV Globo reported on Sunday.

With 45,000 inhabitants Serrana is a healthy oasis in Brazil, which has the world’s second deadliest outbreak with more than 461,000 deaths so far and a very slow immunization pace due to the lack of vaccines.

Serrana was the subject of a study by Instituto Butantan, which produces the Coronavac vaccine developed by China’s Sinovac Biotech (SVA.O) in Brazil.

When vaccination was starting, the city had an increase in COVID cases, but the spread of the virus was contained once 75% of the population was immunized, scientists found.

Scientists divided the city in four areas to try to understand which was the threshold to contain the spread of the virus and found that it was controlled after three areas received the second dose.

The number of symptomatic cases fell 80%, and hospitalizations 86%. COVID deaths fell 95%, according to data given by Butantan to TV Globo.

Serrana is surrounded by cities that are still dealing with a spike in COVID cases. Ribeirao Preto, 15 miles away from Serrana, is going through a lockdown to try to contain the spread of COVID-19.

A similar experiment is underway in another city in Sao Paulo, Brazil’s richest state. The city of Botucatu expects to immunize most of its 148,000 inhabitants with the Astra Zeneca vaccine.