United Nations Headquarters, NY (CNN) With Covid-19 and the environment at the top of the agenda at this year’s United Nations’ General Assembly, observers braced for the first world leader to speak in the UN headquarters’ storied hall: Brazil’s Jair Bolsonaro, notorious for both his off-the-cuff comments and controversial handling of the pandemic and the environment.

The Brazilian President’s speech was calmly given, even monotone at times, opening with a numbing sales pitch of his country to investors that touted developments in sanitation and transportation services. He was presenting “a new Brazil whose credibility has been recovered in the world” — one very different from the country devastated by the coronavirus on his watch and lashed by fires in the Amazon, where Bolsonaro has pushed for development.

The conservative populist leader stuck to established provocations on social and pandemic issues, repeatedly alluding to the importance of “the traditional nuclear family” and criticizing pandemic lockdown measures. Doctors should be free to prescribe the use of “off-label” medications against Covid-19, added the president, who has long championed the unproven malaria medicine hydroxychloroquine as a treatment.

Brazil traditionally goes first in the General Assembly’s weeklong roster of speeches by member states, and Bolsonaro, who is up for reelection next year, had already set a pugnacious tone for his appearance, publicly flouting the UN’s “honor system” that calls for foreign delegations to be vaccinated before entering the building. Bolsonaro declared last week that he would not get vaccinated, because he already had Covid-19.

“Why do you take a vaccine? To have antibodies, right? My antibodies rate is really high. I can show you the document,” he said in a live social media broadcast. He added that he will only make a decision about getting vaccinated “after everyone in Brazil gets the vaccine” — a dissonant voice as the General Assembly pushes this year to increase vaccination throughout the globe, and cajoling wealthier nations to share more doses with poorer ones.

But while the Brazilian President has tended to use appearances at the UN to reject foreign authority — showing a similar allergy to being told what to do when it comes to another globe-spanning crisis: global warming — he seemed to sidestep any direct confrontation on that front.

In 2020 at the UNGA podium, as flames raged in the Amazon, he told the hand-wringing world to back off, claiming foreign agents were overhyping the wildfires in “the most brutal misinformation campaign.” He has long painted the environmental concerns expressed by foreign governments, local indigenous groups, and organizations as prelude to an imagined foreign invasion of the Amazon.

This year, a quieter Bolsonaro acknowledged “environmental challenges” but boasted that the Amazon region had seen a drop of 32% deforestation in August compared to the prior year, citing numbers from the Brazilian National Institute for Space Research indicating 918 square kilometers of deforestation. The number is still nearly double what was registered in August 2018, before the Bolsonaro administration, however.

In contrast, data from the Amazon Institute of Man and Environment (Imazon) — which monitors the deforested areas by satellite — suggest 1,606 square kilometers of deforestation in August, a 7% rise in comparison to the same month last year. It is also the highest rate for August in a decade, according to Imazon´s satellites imagery.

The president also called on other countries to do their part by fulfilling commitments to climate funding “at substantial amounts.” His own government has previously received significant foreign aid from other countries to help halt deforestation — a tactic that some environmental advocates in Brazil criticize, pointing out that not all the money allocated for environmental work in Brazil is spent in the first place.

Bolsonaro, never a fan of pandemic restrictions, acknowledged as much in Tuesday’s speech before world leaders, saying that while he regrets “all of the deaths that took place in Brazil and worldwide,” the toll of unemployment must be balanced against that of the coronavirus. Over the past year, he had frequently raged against municipal and state-level lockdown orders in Brazil, even during the grimmest moments of the pandemic, when hospitals filled to capacity and whole cities ran out of oxygen. Over half a million Brazilians have died in the pandemic — the highest death toll in the world after the United States.

A more moderate tone had been expected from Bolsonaro this year, said Brian Winter, editor-in-chief of Americas Quarterly and vice president for policy at Americas Society/Council of the Americas. For one thing, the assembly’s mood was simply different, with fewer fellow right-wing populist leaders to join Bolsonaro in giving international busybodies the middle finger.

“Bolsonaro is more isolated than ever,” Winter told CNN. “Trump left, Netanyahu is gone. The main country that really aligns with his brand of right-wing conservatism is Victor Orban’s Hungary,” he says. (Bolsonaro did have a sit-down scheduled with Poland’s conservative, anti-LGBTQ president Andrzej Duda before he took the stage Tuesday, though.)

This year, too, the stakes of climate change have never been clearer, with catastrophic fires and floods seen around the world. Brazil’s vast forest works as an “air conditioner” for the globe, influencing global temperature and rainfall patterns, and absorbing carbon dioxide, and Winters says Bolsonaro had already previewed a new “constructive” tone on coordinating climate protection during a summit convened by US President Joe Biden this spring, when Bolsonaro presented a plan to eliminate illegal deforestation by 2030 and neutralize greenhouse gas emissions by 2050.

In a meeting Monday with UK Prime Minister Boris Johnson, Bolsonaro showed the same mild-mannered stubbornness that he later displayed at the podium. The two leaders discussed climate and Covid-19, and Bolsonaro “affirmed Brazil’s commitment to sustainable development,” a Brazilian Foreign Ministry statement read after the meeting.

But when it came to getting vaccinated per the United Nations’ request, he was as unmoving as ever.

During footage of the meeting at the UN headquarters, Johnson could be heard telling Bolsonaro, “AstraZeneca, it’s a great vaccine. Get the AstraZeneca vaccine. I had it twice.” Bolsonaro laughed the tip off. “No, not yet,” he said. 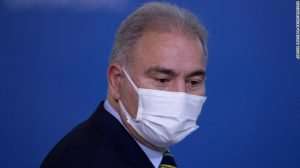 Queiroga was part of Jair Bolsonaro’s Presidential Committee, according to the statement, which added he was “doing well.” So far, other members of the Brazilian delegation have tested negative for the virus.

Queiroga told CNN affiliate CNN Brasil on Tuesday that he would quarantine in New York for 14 days, and wouldn’t leave the United States with other members of his delegation. Some delegation members have canceled their participation due to the risk of infecting members from other countries, Queiroga said.

‘Isolated’ but defiant, Brazil’s Bolsonaro defends handling of Covid and climate at UN

Queiroga, a cardiologist, is Brazil’s fourth health minister since the coronavirus pandemic began. He was appointed earlier this year.

He had been vaccinated with the Chinese-made CoronaVac vaccine, the minister said last week. He did not say when he received the shot.

CNN Brasil was first to report on the minister’s condition ahead of the release of the presidential statement.

A spokesman for the UN secretary-general declined to comment, saying they had “a contact tracing protocol in place in case of cases arising” at the UN headquarters.

Earlier this week, Queiroga came under fire for responding to protesters in New York with an obscene gesture, according to CNN Brasil. Videos went viral on social media, showing the moment he appeared in the window of a minibus and gestured to protesters in front of the residence of the Brazilian Mission at the UN, CNN Brasil reported.

Even before UNGA began on Tuesday, there were concerns the international gathering might pose a health risk — especially with much of the US still battling severe Covid-19 outbreaks. The US government issued a letter in August encouraging world leaders to consider joining virtually, and not in person, to help avoid “a super spreader event.”

Still, more than 100 heads of state and government arrived in person for the event — with some of them unvaccinated.

Most vocal among them has been President Bolsonaro, who has long downplayed the severity of the pandemic and advocated for the use of unproven drugs. Last week, he declared point-blank on social media that he would not get vaccinated because he had once contracted the virus.

On Tuesday, Bolsonaro fulfilled the tradition of delivering the first speech at the meeting, with the rest of the Brazilian delegation in attendance. The President has so far had meetings with several leaders, including UK Prime Minister Boris Johnson and UN Secretary General Antonio Guterres.