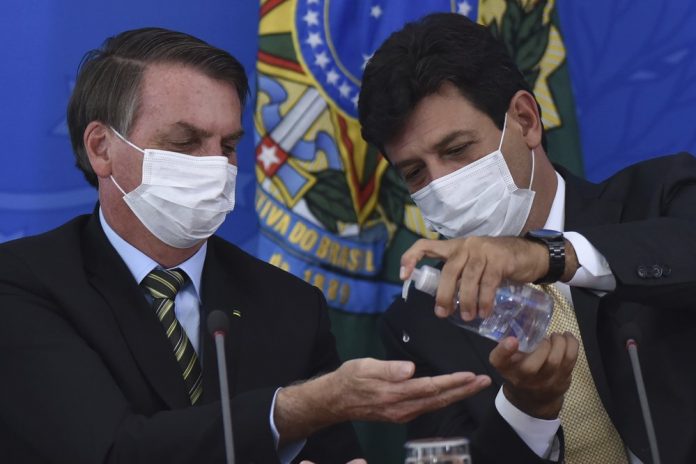 Wearing masks, Brazil’s Health Minister Luiz Henrique Mandetta, right, applies alcohol gel on hands of President Jair Bolsonaro’s hands during a press conference on the new coronavirus, at the Planalto Presidential Palace in Brasilia, Brazil, Wednesday, March 18, 2019. For most people COVID-19 causes mild or moderate symptoms. For others, especially the elderly and people with existing health problems, it can cause many other serious illnesses, including pneumonia. (AP Photo/Andre Borges)

RIO DE JANEIRO (AP) — After questioning the seriousness of COVID-19, defying his own health ministry’s recommendations and denouncing a “certain hysteria,” Brazil’s president is now projecting himself as leading the nation’s response to the coronavirus crisis in what has become one of the biggest challenges to his presidency.

President Jair Bolsonaro provoked the ire of many Brazilians and even former political allies with his blasé attitude to the global pandemic and insistence on shaking supporters’ hands at a protest. One of Brazil’s most popular news sites, UOL, reported Bolsonaro had suggested the Chinese government caused the coronavirus outbreak — a claim later voiced publicly by his son, a lawmaker. China’s embassy rebuffed the allegations, saying on Twitter they were “extremely irresponsible.”

While many countries around Latin America and the world have quarantined millions, canceled international flights and shut down schools, Brazil has done none of these things. Only on Thursday did Bolsonaro order the closing of the country’s borders with its neighbors, except for Uruguay, when almost all South American countries had already taken that measure.

No lockdowns have been ordered and state governments and municipalities have taken the lead in telling people to stay home.

Late Thursday, Brazil announced its first restrictions on international travelers, banning entry for the next 30 days by foreigners from a number of places, including China, Japan and the European Union. Nearly all of its neighbors had already taken similar actions.

“Coronavirus in Brazil is acting as a kind of catalyst, channeling all this discontent and accelerating the process” against Bolsonaro, said Carlos Melo, a political science professor at the Insper University in Sao Paulo. “When he came out to the streets for the protests, he made a very big, very serious mistake. Now he is trying to regain control.”

Faced with a growing backlash, a concerned-looking Bolsonaro, flanked by many of his ministers, on Wednesday gave his first press conference on the coronavirus at Brazil’s presidential palace. During the two-hour event, Bolsonaro said he would redouble efforts to fight COVID-19, but did not announce any new measures. 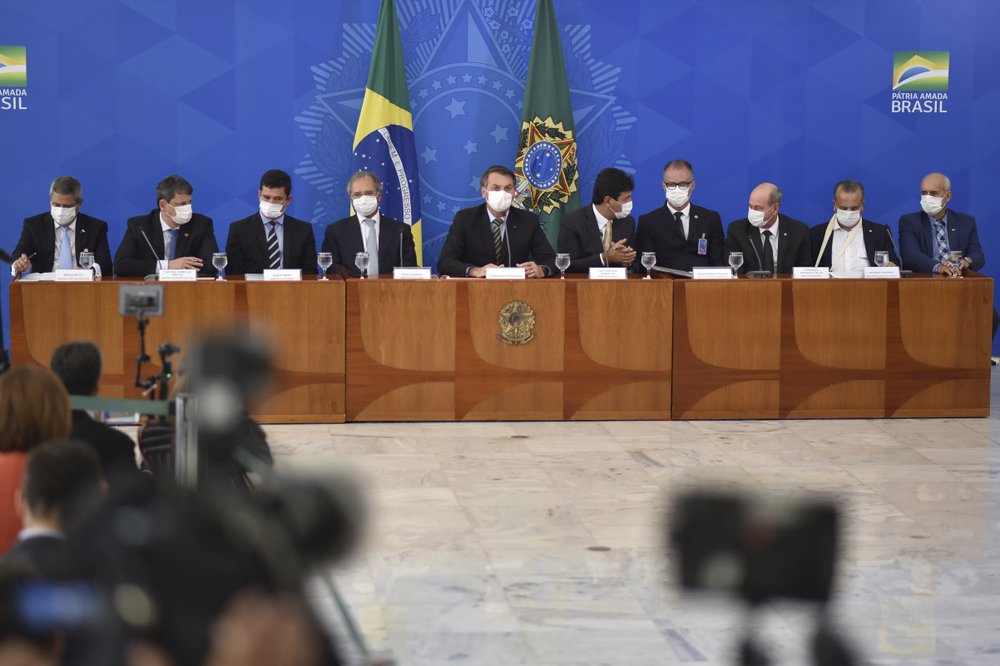 For the first time since the outbreak, he thanked lawmakers for their efforts and called on them to approve a “state of calamity,” which would allow the government to spend more than the annual budget allows, with funds going toward health and job preservation.

But the press conference conveyed mixed messages about how to deal with the pandemic. While vowing to fight the outbreak, he sat shoulder-to-shoulder with his ministers in a violation of the social distancing prescribed by international authorities. Government officials wore white masks, but several of them, including Bolsonaro, removed them repeatedly when speaking.

“As the head of the executive I have to be in the front lines with my people,” Brazil’s president said. “Don’t be surprised if you see me entering a crowded bar in Sao Paulo, a ferry from Niteroi to Rio or in a bus in Belo Horizonte.”

Critics say Bolsonaro’s about-face on the virus follows U.S. President Donald Trump’s example. But for many, it is too little, too late.

Brazil’s president had until recently remained largely absent from press conferences, leaving them to ministers or top health officials. Over the weekend, he was seen meeting and shaking hands with a group of supporters. His decision to come into physical contact with the crowd while awaiting final results of his second COVID-19 test contradicted the recommendations his health minister previously issued about avoiding large gatherings.

“How does a man who is possibly infected go into the middle of a crowd?” Janaina Paschoal told fellow lawmakers in Sao Paulo’s legislature. “This man has to leave the Presidency of the Republic, let (vice-president Hamilton) Mourão, who understands matters of defense, lead the nation.”

Paschoal, a conservative who was once in the running to be Bolsonaro’s vice-president, had criticized the president but never before demanded he step down.

Multiple members of Bolsonaro’s administration have contracted the coronavirus. His top national security adviser, Gen. Augusto Heleno, confirmed Tuesday he tested positive after attending a recent trip to the U.S. along with Bolsonaro. According to online news site G1, more than a dozen members of a delegation who met with President Donald Trump in Mar-a-Lago have also received positive test results.

At least 621 people have been infected in Brazil as of Thursday, and six have died. Officials say they expect the infection number to rise significantly in the coming days.

For most people, the new coronavirus causes only mild or moderate symptoms, such as fever and cough. For some, especially older adults and people with existing health problems, it can cause more severe illness, including pneumonia. The vast majority recover.

Lawmaker Alexandre Frota, another close ally turned critic, filed an impeachment request to congress Thursday. Bolsonaro maintains a strained relationship with the speaker of the lower house, Rodrigo Maia, but it is unlikely congress would consider impeachment amid the crisis.

Even his intellectual guru, Olavo de Carvalho, a conservative Brazilian writer who lives in the U.S., posted a Facebook message suggesting Bolsonaro was on the wrong course and poorly advised.

“From the beginning of his term I told the president he should disarm his enemies before trying to solve any ‘national problem.’ He did the opposite,” Carvalho wrote. “I am sorry. Now it may be too late to react.”

On Tuesday, Wednesday and Thursday night, Brazilians in cities including Sao Paulo, Rio and Brasilia protested against Bolsonaro in one of the few ways possible at a time of social distancing: leaning from their windows and banging pots and pans. Some shouted “Bolsonaro out!” More such protests were promised for as long as Brazilians are in quarantine.

On his official Twitter account, Bolsonaro complained the media had failed to communicate a counter pots-and-pans protest in favor of his administration, which took place a half hour later. That demonstration wasn’t nearly as loud or as long, and participants were shouted at by those in neighboring buildings.