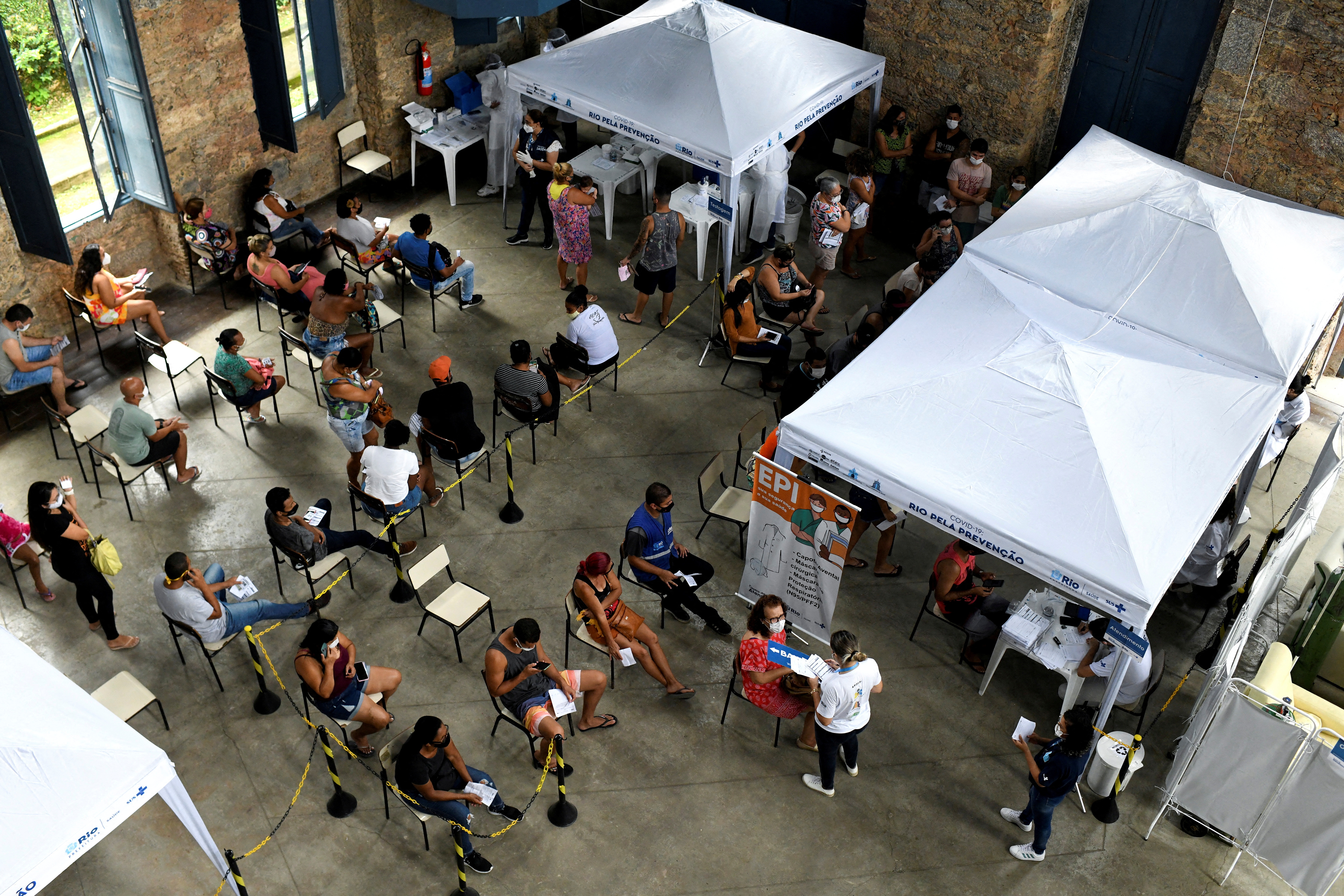 People wait to receive medical attention and to be tested for the coronavirus disease (COVID-19) at Princess Isabel Palace, where a healthcare unit specialising in COVID-19 and flu symptoms has been set up, in Rio de Janeiro, Brazil January 12, 2022. REUTERS/Lucas Landau

RIO DE JANEIRO/SAO PAULO, Jan 14 (Reuters) – Brazil is suffering a sharp rise in COVID-19 cases as the Omicron variant spreads through the country, putting pressure on health services and weighing on an already sputtering economy.

Insufficient testing and a data blackout caused by hackers have made it harder for experts to track the spread of the highly contagious variant in Brazil, but there are increasingly clear signs it is hitting Latin America’s largest nation hard.

Confirmed cases have almost doubled since last week, with the rolling average for the past seven days surging to 52,500, from 27,267 last Wednesday.

Experts believe the actual number is much higher, due to a shortage of tests and patchy systems for reporting and public disclosure of data.

So far deaths – at around 120 a day – remain far lower than last year, when Brazil was briefly the global epicenter of the pandemic with more than 3,000 deaths per day.

With more than 620,000 dead, Brazil has the third-highest death toll from COVID-19, behind the United States and Russia, according to Reuters calculations.

President Jair Bolsonaro has been widely criticized for his handling of the pandemic, rallying against lockdowns, refusing to wear a mask in public and opting not to get vaccinated.

Epidemiologists hope a strong vaccination campaign, which has seen 67% of the population fully inoculated, will dent the impact of the current wave of infections.

But as demand rises for health services, hospitals are also suffering staff shortages as doctors and nurses self-isolate after testing positive for the virus.

“If you don’t know a friend who’s got the virus at the moment, it means you don’t have any friends,” said César Eduardo Fernandes, head of the Brazilian Medical Association (AMB).

“The situation is worrying and it is possible some services will collapse,” he said, adding that staff absences at hospitals had tripled in four weeks since the Omicron wave hit.

A São Paulo physicians union on Friday threatened a strike next Wednesday by doctors staffing public clinics in the country’s biggest city to demand reinforcements. The union said front-line doctors were suffering from exhaustion and understaffing as infected colleagues are forced to isolate.

The variant is also slamming the wider economy. Brazil’s National Association of Restaurants said 85% of its members are dealing with staff absences, with some 20% of the workforce out.

Airlines Azul SA (AZUL.N) and Latam Airlines Group (LTM.SN) were forced to cancel flights due to a shortage of staff, resulting in long queues in some airports.

To try and alleviate the impact, the Health Ministry reduced this week the quarantine period for asymptomatic COVID-19 patients to seven days, from 10.

Several states have canceled Carnival celebrations, hoping to slow the spread. Rio de Janeiro and Sao Paulo have both banned the famous street parties, though for now both cities still plan a samba parade.

Scientists worry the full scale of the outbreak might only become clear in coming weeks.

Some Health Ministry databases have been offline since an apparent ransomware attack on Dec. 10 seriously hampered the government’s ability to gather data from state health authorities. Testing remains well below that of South American peers.