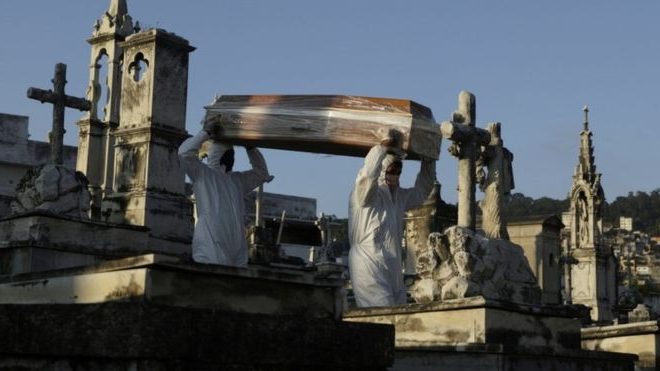 Brazil has become the country with the third-highest number of confirmed coronavirus infections in the world, after registering a total of more than 250,000 cases.

Only the US and Russia have recorded more infections.

Experts say insufficient testing might mean that the real figure in Brazil could be 15 times higher.

The country’s far-right president, Jair Bolsonaro, has dismissed the risks and compared Covid-19 to “a little flu”.

His handling of the outbreak – which has included calls for lockdowns imposed by state governors to be lifted – has led to criticism and the resignation of Health Minister Nelson Teich last week.

But Mr Bolsonaro’s focus on minimising economic disruption has been welcomed by many. Supporters who have organised anti-lockdown rallies, some of which the president attended.

How bad is the situation in Brazil?

Brazil now has more than a quarter of a million confirmed cases. More than 16,000 Covid-19 patients have died, the sixth-highest death toll in the world.

The health system of its largest city, São Paulo, could collapse within two weeks, Mayor Bruno Covas has warned.

The city has a population of about 12 million, and official say show most residents are ignoring social distancing rules. More than 3,000 people have died with the virus in São Paulo.

But it is not only urban centres that have been badly hit. Amazonas state had almost 21,000 confirmed cases as of Monday.