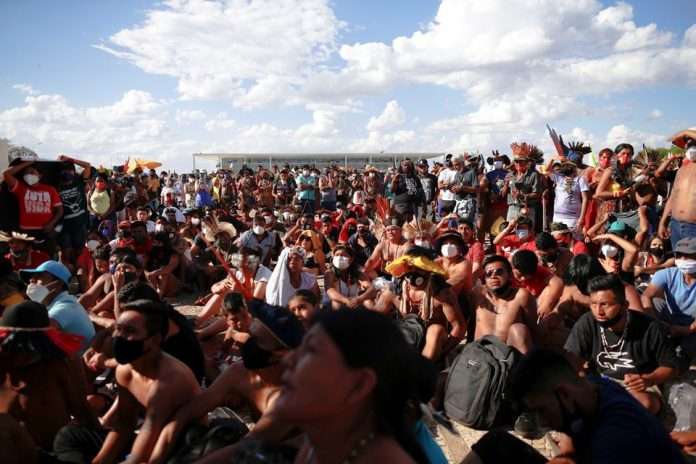 BRASILIA, Sept 1 (Reuters) – Brazil’s Supreme Court on Wednesday heard arguments for and against a cut-off date for land claims that indigenous people say are vital for their survival, while the government advocated for legal certainty for farmers in the agricultural powerhouse.

The top court weighed whether a state government applied an overly narrow interpretation of indigenous rights by only recognizing tribal lands occupied by native communities at the time Brazil’s constitution was ratified in 1988.

The case is expected to drag out for days and set a precedent that would affect hundreds of native land claims.

Indigenous people danced and chanted outside the court as they anxiously watched the proceedings on an outdoor screen.

A lawyer for the largest indigenous umbrella organization APIB, Luiz Eloy Amado of the Terena people, said the rule was unconstitutional because there was no timeframe in the 1988 Constitution, which guaranteed the right to ancestral lands.

“The land question is fundamental for Brazil’s indigenous people,” Amado told the court. He added that some 800 claims, a quarter of which are in the final stages of recognition, would be stalled if the 1988 deadline was not rejected by the court.

Protected indigenous lands offer a bulwark against deforestation in the Amazon. A defeat in court for the indigenous people would set a precedent for the rollback of native rights that far-right President Jair Bolsonaro has sought with the backing of powerful farming interests.

The government’s solicitor general, Bruno Bianco, argued that the time framework gave legal security to farmers, many of whom have lived for decades on land once inhabited by natives who were pushed out by the arrival of European settlers.

Bianco said the issue was best decided by Congress, where a bill establishing the 1988 deadline as law has cleared a lower chamber committee. He said the court should put off a decision until after legislators pass the bill, a strategy supported by Brazil’s powerful farm lobby.

The court adjourned until Thursday, when 18 speakers will appear before the justices start discussing the issue.