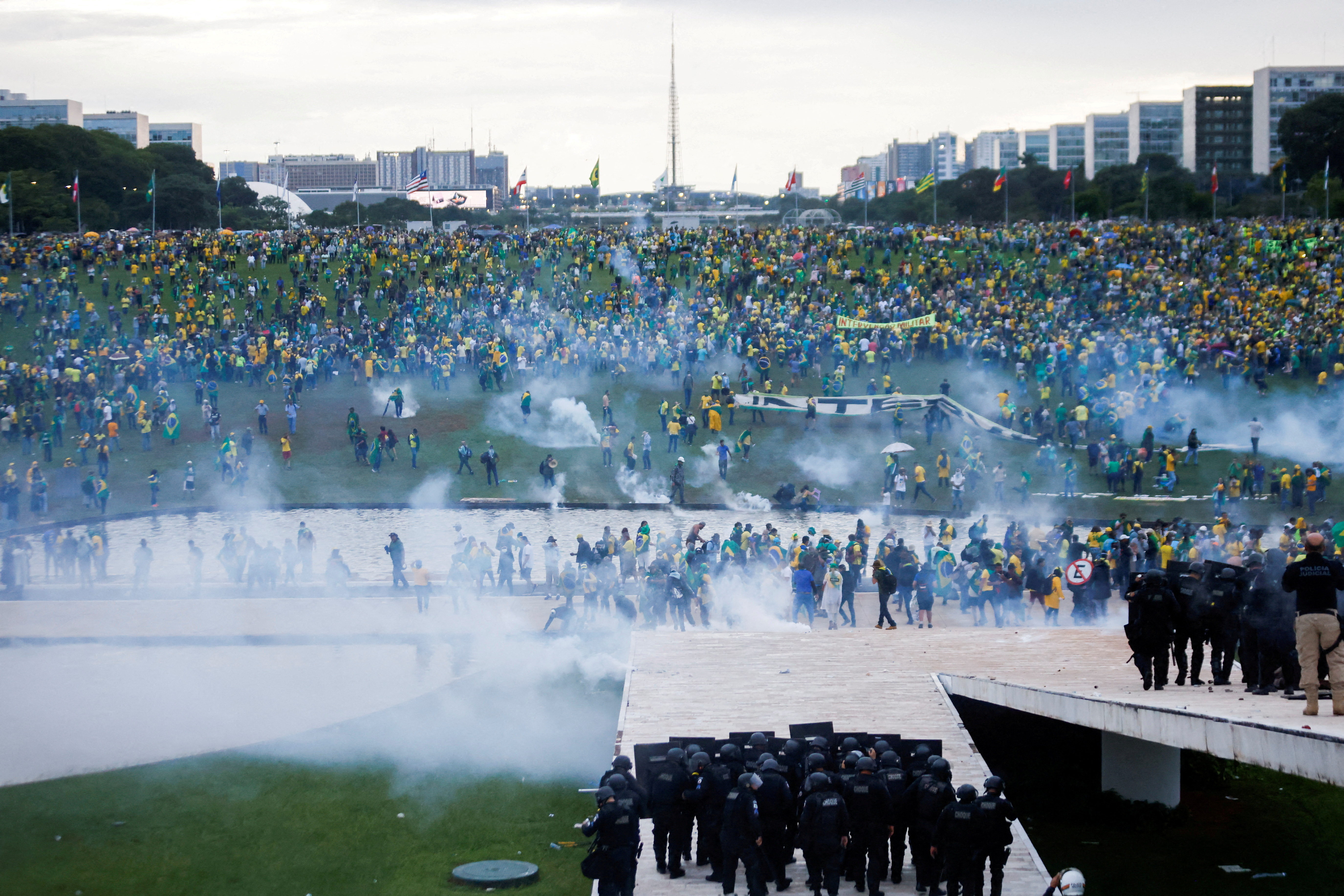 BRASILIA, Jan 16 (Reuters) – With a Brazil flag draped around his neck and his feet propped up on a dark wooden table, Samuel Faria leaned back in the Brazilian Senate president’s ceremonial chair which he had just commandeered and surveyed the chaos on the lawn outside.

“It’s kicking off out there,” he said, watching from his Senate perch as fellow yellow-and-green clad supporters of former Brazilian President Jair Bolsonaro ransacked government buildings in Brasilia on Jan. 8. He then thanked his patrons.

“I’ve got money in the bank,” he said, as he livestreamed Brazil’s worst political crisis in a generation. “Thanks to you dear patriots … who helped us, lots of friends sponsoring us with Pix.”

But now, as authorities seek to identify the funders of the Brasilia riots, the same tool that helped to forge the insurgent movement will be used by investigators to take it down, around a dozen police and anti-money laundering officials told Reuters.

“We have a secure and consistent line of investigation focused on tracking financial movements undertaken via Pix,” said a senior federal police officer involved in the sprawling, nationwide investigation, speaking on condition of anonymity to discuss an ongoing probe. “The financiers’ time is up.”

Supreme Court Justice Alexandre de Moraes, who is leading the criminal probe into the insurrection, and Justice Minister Flavio Dino have said they plan to prioritize uncovering the financiers of the riots, who will likely face similar charges to the 1,398 arrested rioters. They are accused of crimes including terrorism and attempting a coup.

A federal cop working the Supreme Court probe said initial investigations suggested the insurrection was financed by farmers and trucking magnates from Bolsonaro strongholds in the interior of Brazil. However, police had yet to identify a big fish, said the officer, who spoke on condition of anonymity: “Nobody of relevance yet.”

The federal police press office declined to comment about an active investigation.

Faria, the Senate invader from the city of Socorro, in Sao Paulo state, did not respond to a request for comment.

Launched in November 2020 and run by Brazil’s central bank, Pix is free of charge for individuals, allowing them to instantly transfer money to others via online banking apps.

It has been a huge success, used by everyone from beggars to billionaires. Since its launch, over 133 million Brazilians and almost 12 million companies have made or received Pix transfers, according to the central bank. Transactions to date have totaled around 16 trillion reais ($3 trillion) and outpaced debit and credit card payments last year.

Pix has entered all facets of Brazilian life, including the vast, unruly universe of blogs and YouTube channels that serve as a hotbed for Bolsonaro’s core supporters.

Enzo Leonardo Suzin, a conservative YouTuber known as Enzuh, said most of his income still came from ads, but Pix contributions now represented up to 20% of revenue.

“I always used crowdfunding to improve the quality of the channel,” said Suzin, who was targeted in 2020 by a Supreme Court probe into alleged fake news but has never been charged.

Pix has become ubiquitous thanks to the fact it is free and instantaneous. Its reach has been a boon to fundraisers, who can easily receive transfers from across Brazil.

Since President Luiz Inacio Lula da Silva won the Oct. 30 election, Suzin had noticed Pix becoming widely used by the hardcore Bolsonaro supporters agitating for a coup in encampments outside military bases across Brazil, including the army headquarters in Brasilia.

Many of them had paused their lives and were using social media to solicit contributions from like-minded “patriots”.

“Many influencers and some everyday folks there financed themselves exclusively via Pix,” Suzin said.

“It’s an extremely powerful tool within that investigative context, and I have no doubt it will be used,” said Bernardo Mota, a former official at the Council for Financial Activities Control (Coaf), Brazil’s financial intelligence unit.

Pix transfers are covered by bank secrecy laws, and police can only access a suspect’s transaction history with judicial authorization.

Although Pix does not offer more traceability than previous systems, experts said the fact it is administered by the central bank removes a layer of bureaucracy, allowing investigators to sidestep dealing with private banks.

That is particularly useful in an investigation such as this one, Mota said, with a need to quickly trace what could be hundreds or even thousands of different financiers cross Brazil.

One of the most common types of Pix key is a person’s phone number, offering investigators a shortcut to seek wiretaps and subpoena chat records.

The central bank said in a statement that “all Pix operations are traceable,” adding that it “always works closely with the competent authorities in the investigation of any crimes involving the financial system.”

Pix has its investigative drawbacks, experts said. With a growing share of daily transactions now carried out over the system, it may be time-consuming for investigators to separate suspicious transfers from everyday spending.

A current central bank official said a slew of new financial technology companies and digital payment processors had increased access to banking in Brazil, while also making it easier to open an account with little or even false information.

With Pix, protestors could “gather resources for everything we needed,” said Oswaldo Eustaquio, another high-profile Bolsonarista. “Money was never a problem for us.”