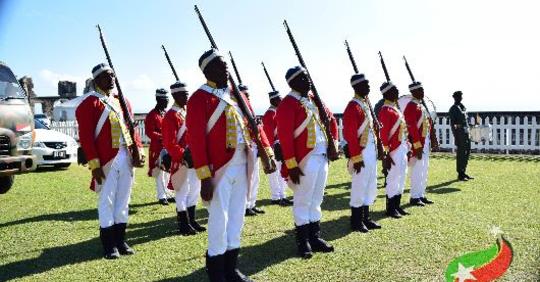 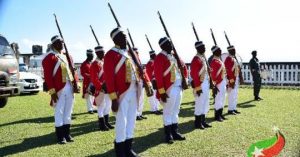 The Brimstone Hill Fortress National Park Society introduced a Changing of the Guard on Sunday. This was done to enhance the visitor experience and be a daily feature where soldiers dressed in the 4th West India Regiment uniform will stand guard at the fortress. The guard will be changed hourly.

“These military men were our forefathers and as a nation of people of predominantly African decent, we must reverence their memory and therefore pay homage to them and to their contribution on these hallowed grounds, which are now one of the premier, iconic tourist attractions,” Minister of Tourism Lindsay Grant said at the ceremony at Brimstone Hill to mark the occasion. “The parade or the changing of the guards… will do just that.”

Grant said the fortress is a symbol “of our forefathers’ ingenuity, creativity, resilience and craftsmanship.” He also said the fortress is the first and only manmade fort in the Eastern Caribbean and was inscribed as a World UNESCO Heritage Site in December of 1999. “At the Ministry of Tourism, we certainly appreciate both its inherent value as a source of pride and prestige and its immense revenue generating potential as a viable heritage tourism product,” he said.