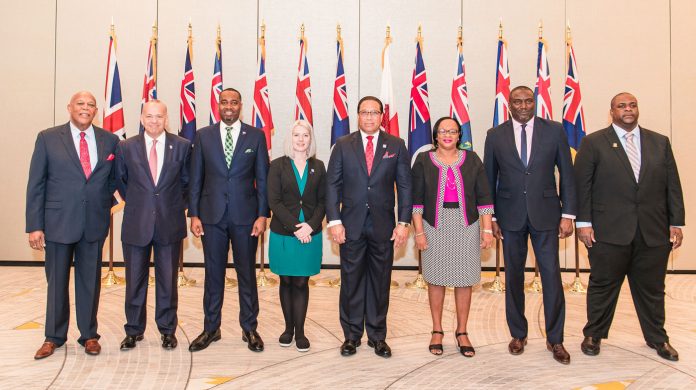 Britain’s Overseas Territories say they will “stand together” to defend their right to self-government amid increasing concerns over “constitutional overreach” from the UK.

Any attempts to enforce legislation from Westminster on issues ranging from same-sex marriage to ‘belongership’ and financial services regulation will be strongly resisted, according to leaders of several territories, following talks in Grand Cayman this week.

Despite the disparate concerns of the various territories, leaders from the Falklands to Bermuda were united in their opposition to the UK dictating policy from thousands of miles away.

A UK law seeking to impose public registers of beneficial ownership on Britain’s territories – seen as a threat to the financial services industry – is a key concern for several islands.

“Modern-day colonialism is what is being attempted by those persons is Westminster, and I am certain that all Overseas Territories will resist it vociferously,” Bermuda Premier David Burt said at a press conference following the summit at the Kimpton Seafire Hotel on Wednesday.

Several other leaders expressed similar concerns, and insisted the pressure from the UK on various issues is helping them to forge closer bonds as they seek to resist what they see as constitutional overreach from the mother country.

“I see a beacon of hope with our team here, because we all realise that divided we fall, united we stand,” said Andrew Fahie, premier of the British Virgin Islands.

A recent report from a Foreign Affairs Select Committee, which included a number of suggestions including recommendations that the UK government force its territories to adopt same-sex marriage legislation and open discussions on allowing resident UK citizens to vote and stand for election, is also stoking controversy.

Though the current British government says it has no plans to follow through on the report’s recommendations, the uncertainty and instability in UK politics amid a Conservative party leadership battle, division over Brexit and the possibility of a general election, is fuelling concern.

Burt said it was possible that the report’s recommendations could gain traction in a new government, and highlighted the possibility that some of its authors could be part of a future government.

“It is sad to see persons who don’t have a familiarity [with the various islands] reverting to a position we thought was long gone, where Westminster feels able to dictate to the Overseas Territories,” he added.

Albert Isola, Gibraltar’s minister for commerce, said the specifics of the issues at stake were largely irrelevant. He said it was “anti-democratic” of the UK to attempt to make laws for its territories on issues that were the responsibility of the elected governments.

“There is no way today we can accept modern colonialism through the back door by allowing these things to happen. On that, as has been demonstrated today, we are all 100 percent on the same page,” he said.

The report caused ripples as far away as the Falklands. Teslyn Barkman, a legislator from the islands, off the coast of Argentina, said it was omitted entirely from the report, but could be faced with the impact of its findings.

She said the recommendation that UK citizens be given the right to vote and run for office in the territories was the most controversial.

Sharlene Cartwright-Robinson, of the Turks and Caicos, said she expected pressure from the UK, particularly over voting rights and same-sex marriage, would continue.

Montserrat Premier Donaldson Romeo said the UK clearly understood the democratic values at stake, because they were fighting for autonomy from the European Union on the basis of the same principles.

“We have just the same right as they have and we need to insist on our right to self determination, and our people need to support us in this regard.”

He urged the leaders around the table to remain united on issues, even when they only affected a handful of islands, and vowed to offer Montserrat’s support to others on issues, like financial services, which do not directly effect the island.

“We have a saying in Montserrat, ‘today for you, tomorrow for me’. I am counting on us to stand together,” he said.