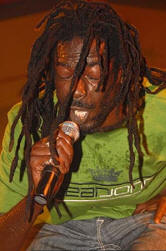 (Charlestown, Nevis)—It was a night to remember when Mark Anthony Myrie -alias Buju Banton – the Jamaican reggae/dancehall artiste, rocked the hundreds of people who came out to see him perform at the Cultural Village in Charlestown on August 4 for the Culturama’s International Night.

The reggae artiste appeared on stage at 12:30 am and performed for an hour and forty five minutes, finishing at 2:30 am. He exuded energy and vibes to the excited chanting and rocking crowd gathered to see him. He performed over twenty of his songs including “It’s Not An Easy Road”, “Murderer”, “Untold Stories”, “Destiny”, “Willy, (Don’t Be Silly)”, “Champion”, “Til I’m Laid To Rest”,  “Wanna Be Loved”,  “Our Father in Zion”, “Hills and Valleys”, “Better Must Come”, “Magic City”, “ Love Me Browning”, and “Give I Strength.”

Drenched and dripping sweat, the artiste admonished Nevisians to love peace and to respect one another. He urged young people to not get caught up in gun and gang culture.

Buju Banton is quite familiar with a culture of violence. He hails from Jamaica, a country that has one of the highest murder rates in the world and one that has seen over 926 murders for this year, most of them as a result of gang warfare and reprisals.

“What nonsense the young people getting into ‘bout Crips and Bloods. St .Kitts and Nevis is too small and too nice for people to be killing each other,” Buju said in reference to the rising crime in the Federation.

He called on parents to spend time in raising their children properly otherwise the repercussions would be catastrophic.

Buju Banton, Bounty Killer, Beenie Man and other Jamaican artistes have come under fire internationally for some of their songs with violence-infested homophobic lyrics, resulting in bans on their shows in Europe. Buju chose to refrain from singing any of his songs with homophobic content.

It was Buju’s first time performing in Nevis, but he performed before in St. Kitts at the Annual St. Kitts Music Festival.

“We really got our money’s worth,” many fans said in speaking of Buju’s super performance.