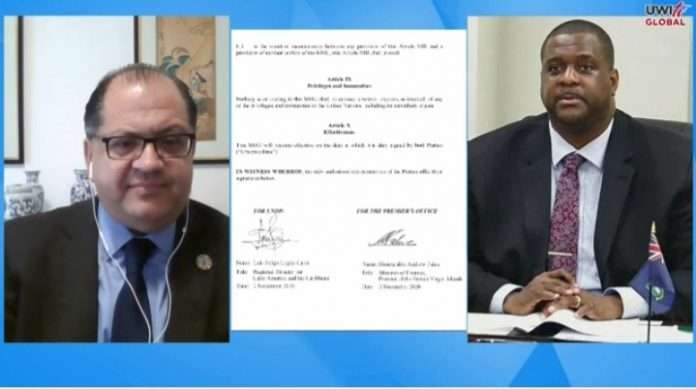 This follows the signing ceremony of the Memorandum of Understanding between Premier and Minister of Finance, Andrew Fahie and UN Assistant Secretary General/UNDP Regional Director for Latin America and the Caribbean Dr. Luis Felipe Lopez-Calva on November 2.

Premier Fahie said the signing of the Memorandum of Understanding between the British Virgin Islands and the UNDP is the culmination of a gradual maturing of a relationship over the course of the last three years.

The Premier said, “Following the devastation of Hurricanes Irma and Maria in September 2017, UNDP was the first UN agency to have representation on the ground and to also deploy an emergency response team to provide early recovery and reconstruction assistance.”

Premier Fahie said the UNDP deployed a highly professional team in the aftermath of the September 2017 hurricanes to assist the Ministry of Finance and the Premier’s Office with recovery and reconstruction and the agency proved to be reliable and trusted partner.

Fahie said at the conclusion of the initial period of technical assistance in the second quarter of 2019, the UNDP recognized that the British Virgin Islands’ recovery was far from complete, and that it needed longer-term assistance to embed climate resilience and pursue sustainable development.

Premier Fahie added, “Targeted additional support was offered in select areas, including blue economy. This particular area of support was embraced, and UNDP provided technical assistance that helped to produce a Blue Economy Roadmap that will be one of the pillars of our National Sustainable Development Plan currently in development.”

The Premier further stated that following his appointment to office, the Government held discussions with the United Nations on furthering the UNDP’s support. He said UNDP senior officials later confirmed that the agency was prepared to move forward with a tangible and structured package of longer-term assistance to support the British Virgin Islands.

Fahie also said that throughout the global pandemic, the UNDP has provided support to the Territory’s COVID-19 response, including policy advice on the reopening of the borders to visitors.

He added, “I would like to take this opportunity to thank the UNDP colleagues in Barbados and Dominica for recently facilitating the provision of policy advice by the world-renowned Barcelona Institute for Global Health, in regard to the planned reopening of the British Virgin Islands’ borders to receive visitors. The policy prescriptions outlined were tremendously helpful in understanding our options and I am appreciative.”

The Premier also expressed the British Virgin Islands’ desire for a stronger relationship with the United Nations.

He stated that the deepening of the British Virgin Islands’ relationship with UNDP is just one pillar of the desired engagement with the United Nations.

“We see a wider partnership with the UN in which other agencies will also play a meaningful role in their respective areas of expertise in supporting our sustainable development,” the Premier stated.

As a British Overseas Territory, the majority of the external relationships of the British Virgin Islands Government are conducted on its behalf by the United Kingdom through the Foreign and Commonwealth Office.

However, the Constitution provides that this power is delegated to Premier and Ministers of Government in relation to certain specific areas which include relations with the United Nations Economic Commission for Latin America and the Caribbean, or any other Caribbean regional organization or institution.

However, there are a number of restrictions imposed by the Constitution upon the exercise by Ministers of that delegated power, including the need for separate authority from the Secretary of State for Foreign or Commonweath Affairs to conclude any treaty or other international agreement, and the requirement to keep the Governor “fully informed” of relevant activities and to provide on request all papers and information relating to such matters.

In turn the British Government has indicated in a letter of entrustment that will consult fully with the British Virgin Islands in relation to matters which are reserved to the United Kingdom Government, including defence, internal security and civil aviation.