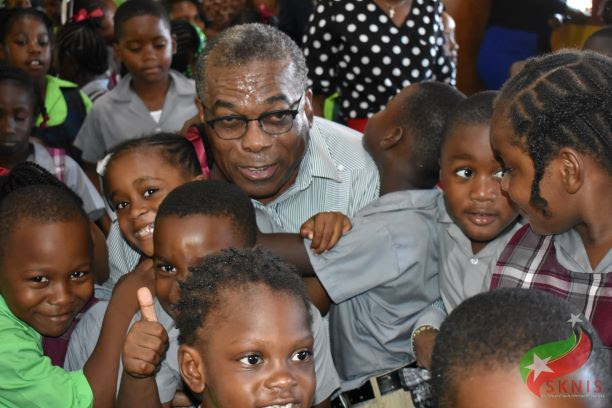 The Team Unity-led Government of St. Kitts and Nevis continued its longstanding tradition of engaging students and teachers through annual visits to schools as part of Independence anniversary celebrations as St. Kitts and Nevis celebrates 36 years as a sovereign nation on Sept. 19.

This year, Cabinet ministers strongly impressed upon the students and teachers the importance of the theme chosen for this year’s Independence celebrations: “Unify, Transform, Enrich: Uplifting Communities for Independence 36”.

While speaking to students of the Joshua Obadiah Williams Primary School and the Violet Petty Primary Schools, Minister of Public Infrastructure et al., the Honouarble Ian Patches Liburd urged the students to take full advantage of the educational opportunities available to them.

“Once you make the best use of that opportunity I want you to also commit that you will try to unify, [you] will try to transform and [you] will enrich St. Kitts and Nevis,” the minister said.

Attorney General, the Honourable Vincent Byron commended the nation’s teachers for the invaluable work they do.

“We want to encourage you [and for you] to know that the Government stands fully behind you as you perhaps do the most important work in our country, which is to help to build our future; to help to unify all of our young people to help them to understand and most importantly transform you as we build our nation to be the best small island state anywhere in the world, and in so doing we know that you will be enriched by your teachers,” he said.

Prime Minister Harris indicated that as part of their mission to transform and enrich the lives of students throughout the country, the Team Unity administration continues to place much emphasis on training of educators.

“That is why very recently the Government invested in 50 teachers to engage in the Master’s programme in education leadership and other areas of engagement. For the first time in the history of education has such expenditure come to the fore where so many are benefiting in post graduate training for the education sector. It is representative of the kind of investment which we are making because we are already small, so we need to make sure that we have quality human resource to take our country to the next stage of its development,” he explained.