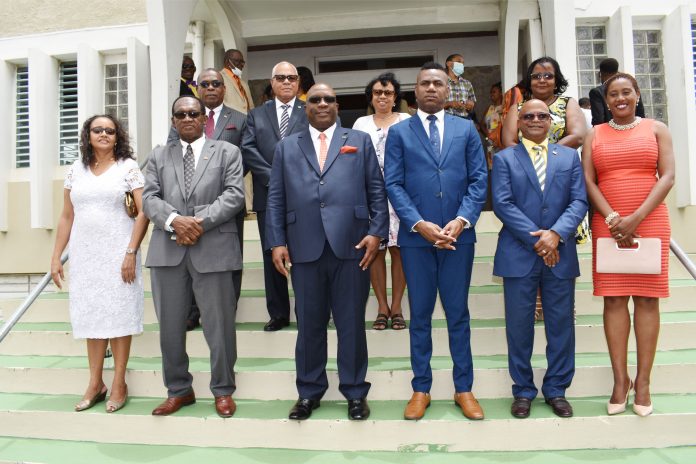 The new Federal Cabinet met the first time since being sworn in for its second term Monday at the Ministry of Finance Conference Room with Prime Minister Dr. Timothy Harris urging his colleagues that it was now time to work for the people.

The sitting was opened with a word of prayer rendered by Senior Pastor of Unique Touch Christian Centre, Pastor Clive Saunders.

The prime minister reminded his ministers that the task of delivering on the various programmes and policies geared toward nation-building begins now, adding that “our plans now have to be implemented through the governmental system, and in large measure, it will be the responsibility of the ministers to be able to get those policies determined and actioned.”

He said the work to deliver on their campaign promises now begins. “Work on the Stronger Safer Future starts now as we convene the first Cabinet meeting for the second term of the Team Unity Administration – onward and upward.”

Prime Minister Harris welcomed  Akilah Byron-Nisbett, Jonel Powell, Eric Evelyn and Alexis Jeffers and commenced Monday’s session by outlining some of the guidelines associated with the meeting of the Federal Cabinet as the Government moves forward in pursuing the agenda of the stronger, safer future which it promised to deliver for all the people of St. Kitts and Nevis.