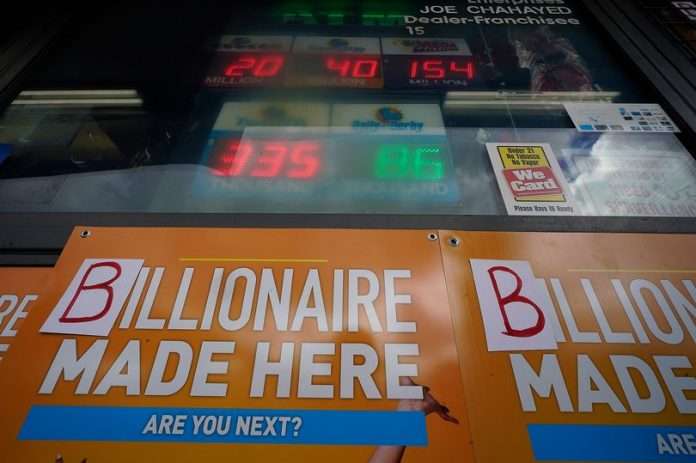 A single winning ticket sold in California bagged Monday night’s record $2.04 billion Powerball jackpot, the lottery said, though the lucky winner faces a hefty tax bill and will take home much less than the headline prize—here’s how much.

Powerball lottery winners can choose between receiving the full prize as an annuity—a series of 30 payments paid over 29 years—or as a single lump sum payment.

The single payment is less than the advertised jackpot, which emphasizes the value of the annuity prize, but is the most popular option among winners and Saturday’s cash prize is worth just under $998 million.

A mandatory federal tax withholding of 24% on gambling winnings would immediately reduce that amount by around $240 million for a single prize winner, who would take home $758 million, though the taxman is far from finished.

The top federal marginal rate is 37% and unless the winner has reduced their taxable income in some way—such as through large tax deductions like charitable donations—they should expect to set aside another $129 million for federal taxes and will have the overall prize whittled down to $629 million.

California does not tax lottery winnings so the winner would not owe additional local taxes unless they reside outside of the state, in which case state and city taxes would depend on where they live and eat into this sum further.

A winner opting for the annuity payment is set to receive around $68 million a year, though this would be reduced to around $43 million by federal taxes and could be cut further by state and city taxes depending on where the winner lives.

The grand prizes up for grabs in lottery jackpots have soared in recent years. Huge jackpots are a feature, not a bug, of lottery design and the rules are structured to make it easier to win but harder to win big. The Powerball had been drawn 41 times without a jackpot winner, the last of which was in August, the lottery said, a record for the longest run. The jackpot marks the largest in the lottery’s history and the largest lottery prize in U.S. history.

$1.59 billion. That’s the value of Powerball’s largest jackpot before Saturday’s prize grew to $1.6 billion. The prize was shared between three winners in California, Florida and Tennessee in January 2016. The lottery said this prize held the world record for the largest lottery jackpot.

What To Watch For

Wednesday’s Powerball jackpot has reset to an estimated $20 million. The drawing is set to broadcast live at 10:59 p.m. ET from the Florida Lottery studio. The drawings are also live streamed online at Powerball.com.

The stellar jackpot has encouraged even more people than usual to try their luck. The lottery said there have been numerous reports of residents from non-participating states—Utah, Nevada, Hawaii, Alaska and Alabama—traveling across state lines to enter. The high demand caused issues with one lottery processing its sales and delayed the draw by several hours and caused some confusion in whether the jackpot had been won (initial reports wrongly suggested the jackpot had rolled over to $2.3 billion). The prize even garnered the attention of international gamblers, the lottery said, and hundreds of thousands of Australians reportedly bought tickets to enter Monday’s draw.