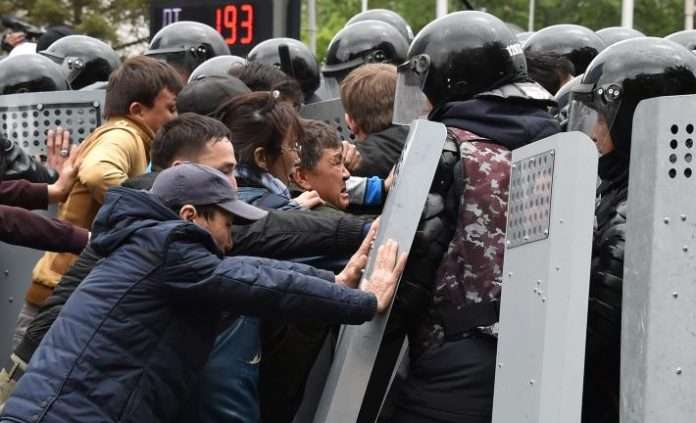 New research by Freedom House found that they can—under these conditions.

Over the last decade, the world has seen a dramatic rise in public protest actions not just in democracies, but in repressive authoritarian regimes. A new report from Freedom House explores how protest movements emerge in environments where speaking out against the government is often met with deadly force. In How Civic Mobilizations Grow in Authoritarian Contexts, we studied 21 popular movements over the last decade. Some of them faded away, but others grew to proportions most observers would never have predicted.

Why did some movements grow, and what held the others back? Mobilizations that grew into sustained resistance movements had at least one of the following things in common.

New dissidents leading the cause. The presence of fresh faces was one of the most important factors in drawing broad popular support to a movement. In our study, sustained protest movements were often led by entrepreneurs, artists, environmentalists, and others. Notably, they tended not to be led by established prodemocracy activists. Repressive governments keep tabs on these activists and are quick to quash unwanted activity. Well-known activists can also be perceived by the public as an “old guard” disconnected from everyday concerns. But new activists can move more nimbly and may face less skepticism.

Exposing regime hypocrisy. While authoritarian regimes use violence to stay in power, they also want the population’s genuine support. They may take credit for economic growth or claim to be preserving national values in the face of foreign influence. In our study, successful protest movements turned the regime’s propaganda against it. In Cuba, artists and musicians creatively repurposed government slogans to expose a regime that relegated its own people to poverty for abstract revolutionary goals. In Belarus, entrepreneurs and social media activists successfully appealed to an apolitical middle class with arguments that key Belarusian values—such as solidarity, fairness, and authenticity—were more firmly embedded in the opposition’s vision for the future than the regime’s.

Innovative use of social media and messaging apps, often by youth. These tools are critical for organizing public actions, and serve as public squares where people can discuss their experiences, see that they are not alone in their dissatisfaction with the regime, and plan for a different future. Youth movements were often adept at using these technologies, and, in general, in developing innovative forms of resistance that regimes were not always certain how to respond to.

Support from in-country professionals and diasporas abroad. Another key factor was the support of nonpolitical organizations and other groups inside the country, as well as support form diasporas. Local unions and professional organizations came out in support of various movements, for example, while tech experts at home helped to develop internet-based tools used by activists. Many activists in movements that gained broad-based support also had ties to diaspora groups who provided financial assistance, and took advantage of freer environments in host countries to speak out about the cause. In-country human rights advocates, lawyers, journalists, election monitors, and other prodemocracy professionals were often able continue to work within authoritarian regimes thanks to ongoing support from outside the country.

Delayed regime reaction. Autocrats almost always repress protests, but the timing of repression mattered for whether the movement grew. Movements that were crushed by the regime just as they were getting started often failed to grow. Movements that were repressed when they were already popular, however, tended to grow even more as highly visible acts of repression triggered moral outrage among citizens who ordinarily support the regime.

In some of our cases, movements challenged regime legitimacy at its core. In cases such as Sudan and Ethiopia, they prompted significant political change, at least for a while. In other cases—such as in Vietnam, where protests were prompted by a preventable environmental disaster—the movements pressured the government to change a particular policy or address a particular grievance.

Both activists and regimes learn from their successes and failures. For activists, even failed movements can serve as lessons in how to build a broad social campaign capable of staying one step ahead of state repression. Those who dare hope for a brighter future in these dark places should support activists in their nascent and innovative efforts, and not just when it is clear that they have already succeeded.